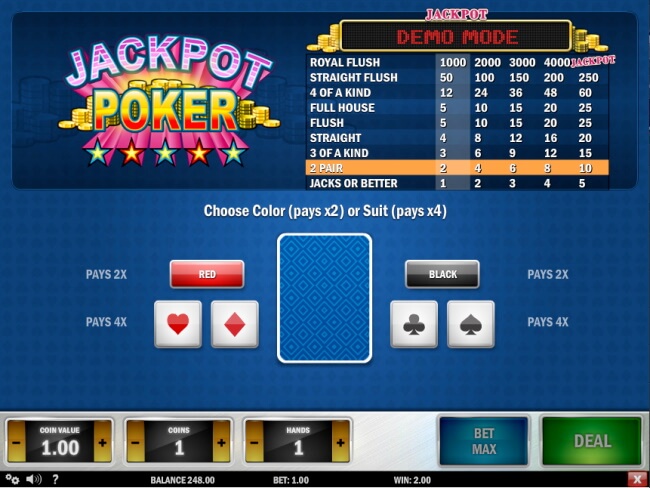 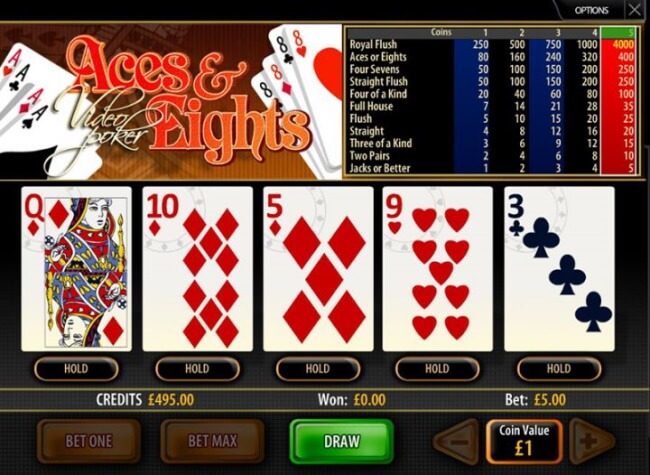 It is one of the Video Poker with 4000+ Jackpot that are available through Microgaming. This game has pixel-perfect graphics, a user-friendly interface, and a twist on the payout schedule that is available to you in other variations of video poker.

A standard 52-card deck without jokers is in place to play it. The cards are shuffled before each deal. The objective of Aces & Eights video poker is to collect a hand that is paid according to the paytable. You can also exchange any number of cards once for free.

The gameplay is similar to that of the bulk of traditional types of video poker. You make a bet, receive a card, discard unnecessary cards, and get a payout for a hand if it has been formed.

You can try to increase your winning in this risk game. Here you will notice one upcard and four hole cards. You have to find a hole card that will have a higher rank compared to the face-up card. If you succeed, your payout is doubled. On making a mistake, you will lose your bet. You can refuse to continue playing only when you have already made your choice.

Playing cards are a symbol. The game is played with a deck of 52 playing cards that is random-shuffled after each round of play. This is one of the most popular variations of video poker. Some hands have an especially high payout.

The highest payout of all is for a Royal Flush, which consists of a Ten, Jack, Queen, King and Ace, all of the same suit. At Microgaming’s Aces and Eights, the payout for a five-coin bet in 4000 coins.

Here is the list of how hands are ranked in Aces and Eights.

You can play Aces & Eights video poker betting range from one to five coins whose value varies in the range between twenty-five cents and ten dollars. If you wager five coins, the highest hand is a royal flush is paid as per the disproportionately high multiplier, namely 4,000 coins. 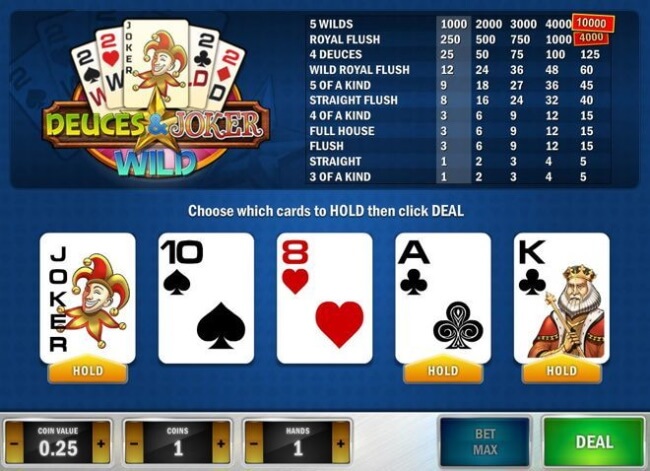 Deuces Wild is a popular version of Video Poker with 4000+ Jackpot that is available online and with the version from Microgaming. You can enjoy having the chance to win a 4,000 jackpot and many other payouts.

You can play this game as a single or multi-hand version of video poker, so there are many betting options to suit the needs of many. This game is played with a standard deck of cards and all Deuces will act as wilds to replace any other card in the deck. This will increase the chance of getting winning combinations.

The game uses a standard deck of 52 cards. In this video poker variant, deuces (2s) are wild, and they can replace any other card on the deck to form a winning hand.

You can play this game like any other and the only difference between it and a game of Jacks or Better is the different paytable and the wild cards.

Cards are the symbols of the video poker game. You may hold all five or discard up to five cards to receive new cards in the quest for a better and winning hand.

Royal Flush without a Deuce: This is the highest paying hand in this Wild video poker, and it consists of Ace, King, Queen, Jack, and 10, all the same suit.

Four Deuces: This is the second-highest paying hand, and it consists of four 2s.

Wild Royal Flush: This is a Royal Flush, but contains two or more 2s.

Five of a Kind: It’s a hand containing five cards of the same value (four cards plus one 2).

Four of a Kind: It consists of four cards of the same value.

Flush: A hand with any five cards of the same suit, but not necessarily in consecutive order.

Three of a Kind: A hand with any three cards of same value.

Video poker games do not have any bonus rounds, but this game does have some nice features that can boost payouts.

All Deuces in the game can be used as wilds and these can stand in for all other cards to complete winning hands. There is also a special payout for getting four Deuces, which will award you a 1000 coin win when they bet 5 coins.

The game has a maximum jackpot of 4 000 coins, which is awarded for the highest-paying combination – Royal Flush, at the highest bet level. 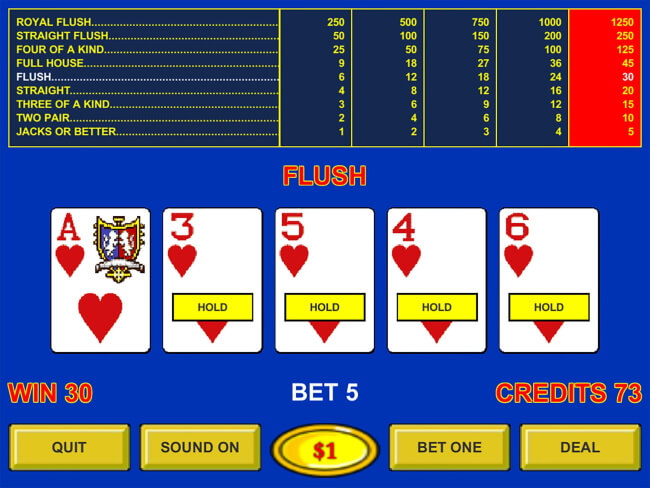 Jacks or Better Poker is a standard, simple Video Poker with 4000+ Jackpot variation designed by Microgaming. Anyone can play this poker game, as it pays off on a pair only if that pair is jacks or better, and otherwise resembles any standard version of the game.

In this game, you will find no wild cards, no jokers, no bonus payouts that are out of the ordinary. You can receive the maximum jackpot of 4000 coins, which comes as a result of a Royal Flush (10, J, Q, K and Ace of the same suit).

This Video Poker is played with a standard deck of 52 cards, with no wild cards. The wagering process invokes the use of the plus (+) and minus (-) controls, which will increase or decrease the size of the coins you will use in your betting.

The rules for Jacks or Better video poker are similar to the five-card draw poker. The only difference is no raising or bluffing and you’re not playing “against” other players.

Like all games you play against the house in a casino, it is remotely actually possible to win in the long term.

Cards are the symbols of the video poker game. Any card that is a Jack or higher is a high card which includes Ace, King, Queen, and Jack, while low cards run from 2 through 10.

Royal Flush is the highest paying hand in Jacks or Better.

How to Win at Jacks or Better Video Poker

It is a very simple but fun game to play. It has clean and crisp graphics with ultra-smooth gameplay. The maximum jackpot is 4000 coins, which you will win if you land a Royal Flush – in other words, a Ten, Jack, Queen, King and Ace of the same suit. 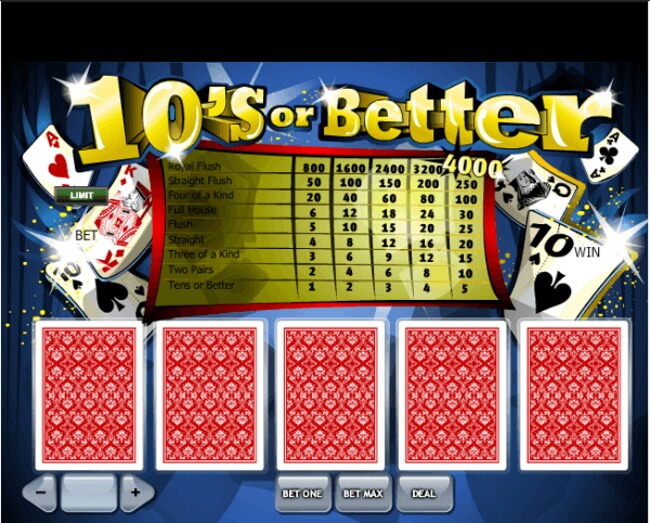 It is a popular Video Poker with 4000+ Jackpot from Microgaming resembling Jacks or Better video poker game. You will not get any payout unless you make at least a pair of tens, which makes it incredibly easy to complete your video poker game several times richer than you were upon starting.

In this game, you compete against the machine rather than against other players. It is a 1-hand game and the player’s goal is to have at least a pair of 10’s among the cards dealt. The best paying combination is the Royal Flush.

You have to place the desired bet. Then, you will be dealt five cards. You can either keep them or can discard some.

You need to decide how much money you want to wager.  So begin by placing your bet. Then hit the deal button to receive your five face-up cards. Choose which cards you’d like to keep and those you would like to discard. Hit Hold for all cards that you want to keep; the rest will be discarded and new cards will be dealt in their place once you opt to deal again.

The symbols on the video poker game are the cards. Here are the possible winning hands for Tens or Better video poker and what they entail, ranked highest to lowest.

Royal Flush: This has A/K/Q/J/10 of the same suit. This is the highest paying hand in Tens or Better.

You need to have a proper strategy to ensure your session is both entertaining and profitable.

Here are a few useful tips:

The maximum jackpot is 4000 coins, which you will hit when you land a Royal Flush – in other words, a Ten, Jack, Queen, King and Ace of the same suit. When you bet one coin and land a royal flush, you’ll win 500 coins. Still, you can win 4000 coins if you wager five coins. That’s an extra 1500 coins on top of 2500 you might otherwise expect.

These are the most popular and widely played best 4 video pokes with 4000 Jackpot coins to win. Give a try to each of them and have an engaging and fun time.