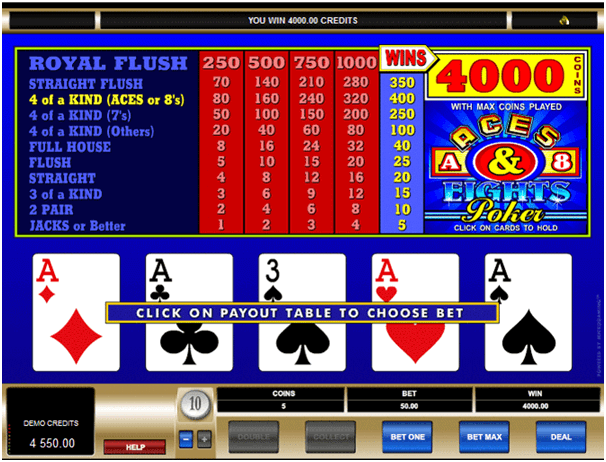 Aces and Eights is one of the video poker options that are available through Microgaming, the leading manufacturer and developer of online casino software in the world. The game features sharp graphics, a user-friendly interface and presents a twist on the payout schedule that is available to the player in other variations of video poker. A standard 52-card deck without jokers is used to play it. The cards are shuffled before each deal.  The aim of Aces & Eights video poker is to collect a hand that is paid according to the paytable. If necessary, it is allowed to exchange any number of cards once for free.
You can play Aces & Eights video poker betting from one to five coins whose value varies in the range between twenty-five cents and ten dollars and also you can play betting only on one hand.

While the game generally follows the standard rules of play, Four of a Kind hand combinations will pay out with unexpected generosity. This version of video poker is not difficult to learn. The sharp, well laid out graphics and the user friendly interface are typical of Microgaming. A doubling option is included for winning players.

The Expert Mode for Aces and Eights is especially interesting for veteran players. This offers an autoplay option and the possibility to review ongoing game statistics.

Players can check back on details of hands they played in past rounds in order to determine their odds of getting high ranking hands in the future from various card combinations.

The gameplay does not differ from the bulk of traditional types of video poker. You make a bet, receive a card, discard unnecessary cards and get a payout for a hand if it has been formed.
If you find your winning not big enough, you can try to increase it in the risk game. Here you will notice one upcard and four hole cards. Your task is to find a hole card that will have a higher rank compared to the face up card. If you succeed, your payout is doubled. If you make a mistake, you lose your bet. You can refuse to continue playing only when you have already made your choice.

Symbols of course are the playing cards. The game is played with a deck of 52 playing cards that is random-shuffled after each round of play. This version is one of the more popular variations of video poker that is available. There are certain hands that have an especially high payout, including:

Of course, the highest payout of all is for a Royal Flush, which consists of a Ten, Jack, Queen, King and Ace, all of the same suit. At Microgaming’s Aces and Eights, the payout for a five-coin bet in 4000 coins. There is obviously a benefit to wagering the maximum, since the payout for four coins is 1000 coins.

As in all video poker games, the player receives five cards in a random deal. Then there is the opportunity to discard up to all five cards and receive five fresh cards. After the re-deal, the player has his/her final five-card hand, at which point the software registers the end result of that five-card hand.

The list below shows how hands are ranked in Aces and Eights. The list shows the pay rankings from the highest paying hand to the lowest paying hand in consecutive order.

Draw only one card if you have the following hands:

Draw two cards if you have the following hands:

If you have only one high card, draw four cards. It is better you draw four new cards and retain the high card. If, on the other hand, you hold two high cards, keep them and hope to draw a pair on one or both.

More so, if you not able to form any of the hands mentioned above, discard all five cards and draw five fresh ones. A high card in Aces and Eights video poker is a Jack or higher (Jack, King, Queen, and Ace). Low cards are all those cards that are below a Jack in value. They run from 2 through to 10.

You can play Aces & Eights video poker betting from one to five coins whose value varies in the range between twenty-five cents and ten dollars. If you wager five coins, the highest hand (a royal flush) is paid according to the disproportionately high multiplier, namely 4,000 coins. Compare this to the payouts for lower bets: 250 is provided for one coin, 500 is a payout for two coins, 750 is given for three coins and 1,000 is provided for four coins.