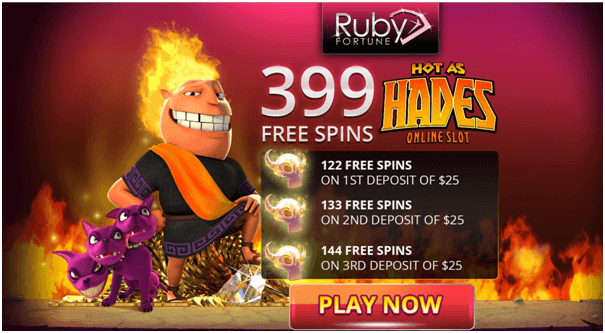 Hot As Hades is an addition to the ranks of Greek god-themed online slots from Microgaming. Hades in this case refers to the realm of the dead in Greek mythology but originally it was the name of the particular god who ruled over this domain. Hot As Hades is a five reel slot with three rows and twenty fixed paylines. It’s a fiery cave in which Hades and Cerberus occasionally wander with big grins on their faces.

The five high value symbols are Hades himself, Zeus, Poseidon, Medusa and Cerberus; the lower values are the usual 10, J, Q, K and A. The ‘Hot As Hades’ logo is wild and will multiply by 2x any wins to which it contributes. The crystal helm is the scatter symbol which activates the main feature.

There is a super mode feature which is a randomly triggered bonus awarded during the base game in which you will receive five free spins. Three extra wilds are added to the reels for these spins which are frozen in place until they end; additionally one extra wild may be added per spin if you’re lucky.

Quest for the Crystal Helm

There’s a bit of a narrative to this mini-game which is triggered by landing three or more of the crystal helm scatter symbols anywhere in view. It’s essentially a picking game in which you (as Hades) must work your way through four rounds characterised by Cerberus, Medusa, Poseidon and Zeus.

Each successful pick awards cash prizes but if you find the ‘Block’ object the round is over; make it through to the final round beyond Zeus and that’s where the big prizes are you.

How to get started