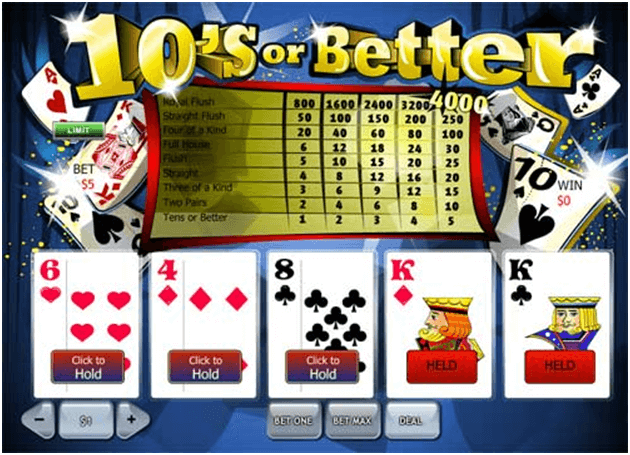 Tens or Better is a game in which you compete against the machine rather than against other players. It is a 1-hand game and player’s goal is to have at least a pair of 10’s among the cards dealt. The best paying combination is the Royal Flush.

In order to get started, you are supposed to place the desired bet. Then, you will be dealt five cards. You are free to keep all of them or discard as many as you want. When you click on the Draw button, the cards you have discarded are replaced and your payout is determined in accordance with the pay table. Although the rules below may vary from machine to machine, here are the details you have to pay attention to before you start playing Tens or Better.

You should have no trouble finding Tens or Better in the lobby alongside the other video poker variations. After the game launches, you’ll need to decide how many dollars or cents you want to wager.  So begin by placing your bet. After deciding how much real money you want to wager, hit the deal button to receive your five face up cards. Choose which cards you’d like to keep and those you would like to discard. Click Hold for all cards that you want to keep; the rest will be discarded and new cards will be dealt in their place once you opt to deal again. Remember, you only need a pair of 10s to be eligible for a payout.

Tens or Better video poker game always let you play between one and five coins. In addition, you’ll be able to adjust the value of each coin for added flexibility.

Symbols on the video poker game are obviously the cards. The list below shows all the possible winning hands for Tens or Better video poker and what they entail, ranked highest to lowest.

Doubling in Tens or Better

In some online casinos you could have the option of doubling. How this works is that if you win a hand, you can choose to have five new cards appear on the screen. The first card, the dealer’s card, will be dealt face up, whilst the remaining four will be dealt face down. From the four cards you have to pick just one, and if the value of the card is higher than the dealer’s card you can double your original winnings. If it’s a tie you can leave the game and collect winnings, or double again. However if you lose you won’t get to hold on to your winnings. Some online casino may even offer half doubles – you can double half your winnings and put the remaining balance securely into your online casino account

Having a proper strategy ensures your session will be both entertaining and profitable. If you do not have much experience, here are a few tips that might be useful:

As you know, the lowest winning combination is a pair of 10’s. Therefore, the low pairs will not be useful and you should discard them.

In case you are dealt cards that are not likely to create a winning combination, keep those that have a value higher than 10 and you can eventually make a pair of 10’s.

The payout for Royal Flush and a wager of 5 coins is really generous in this game and the most sensible thing you can do is to always place the highest bet.

You are not advised to break up a paying hand except for the cases when you get four or five cards that form Royal Flush.

The maximum jackpot is 4000 coins, which you will win if you land a Royal Flush – in other words, a Ten, Jack, Queen, King and Ace of the same suit. If you are new to video poker, you should know that it’s always best to play five coins. That’s because online gambling with Tens or Better payouts are best on a maximum bet, at least if you hit the jackpot. When you bet one coin and land a royal flush, you’ll win 500 coins. Yet you can win 4000 coins if you wager five coins. That’s an extra 1500 coins on top of the 2500 you might otherwise expect.