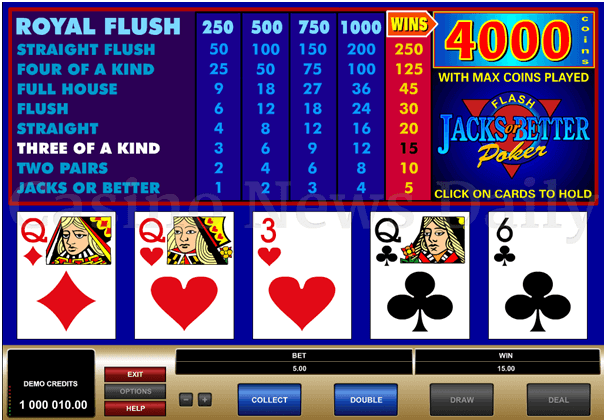 Jacks or Better Poker is a rather standard, straightforward poker variation that is designed by Microgaming. It is simple video poker game that anyone can play it, as it pays off on a pair only if that pair is jacks or better, and otherwise resembles any standard version of the game.  There are no wild cards, no jokers, no bonus payouts that are out of the ordinary. The maximum jackpot that is paid out in Jacks or Better Poker is 4000 coins, which comes as a result of a Royal Flush (10, J, Q, K and Ace of the same suit).

Jacks or Better Video Poker is played with a standard deck of 52 cards, with no wild cards. The cards are shuffled before each and every deal, and so they come out randomly.  The wagering process invokes the use of the plus (+) and minus (-) controls, which will increase or decrease the size of the coins you will use in your betting. When you click “Bet One” you are betting one unit times the coin size, Clicking “Bet Max” gives you the maximum times that coin size. For example, if your coin size is 0.25, the maximum bet you’ll have is 1.25. If it’s 5 units, the max bet will be 25.

The rules for Jacks or Better video poker are the same as for five-card draw poker. Only difference being that there is no raising or bluffing and you’re not really playing “against” other players. You just make a single bet at the beginning and your goal is to have a hand that includes a pair of jacks or better. Otherwise, the house wins.

Like all games you play against the house in a casino, it is nearly impossible to actually win in the long term. However, video poker offers some of the best payouts for a slots-type machine when played well. Also when combined with a good casino bonuses and comp points, you can actually make a good win due to the freebies given out.

Symbols on the video poker game are obviously the cards. Following are the hands to understand:

How to Win at Jacks or Better Video Poker

One of the main principles behind most video poker strategies is that you want the machine to deal you a winning hand. If you’re dealt a winning hand, you will very rarely discard any of those cards to draw to something else. The only exception is four cards to a royal flush, and that exception is only there because the payout on that hand is so large compared to the other hands.

Jacks or Better is a very simple but fun game to play. The graphics are clear and crisp and the game play is ultra-smooth. The maximum jackpot is 4000 coins, which you will win if you land a Royal Flush – in other words, a Ten, Jack, Queen, King and Ace of the same suit. Even though this is a rather standard version of the game, there is indeed a little “twist” that can be played. After a winning hand, the player can seek to double that win by engaging in a “showdown” with the dealer. There are five cards dealt onto the screen – four of them face-down, which represents a choice for the player, and one card face-up, which is the dealer’s card. The player picks one of the face-down cards and if it is of a higher value than the dealer’s face-down card, the win is doubled. The player can elect to double again, or quit and collect.