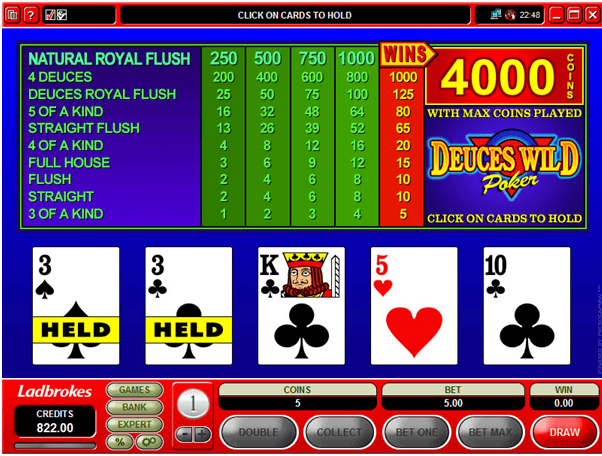 Deuces Wild is a popular version of video poker that can be found online and with the version from Microgaming.  Players will enjoy having the chance to win a 4,000 jackpot and many other payouts. This game can be played as a single or multi-hand version of video poker, so there are many betting options to suit the needs of many. It is played with a standard deck of cards and all Deuces will act as wilds to replace any other card in the deck. This can greatly increase the chance of getting winning combinations, however, the payouts are a bit lower than with games that do not use any wild cards.

The game uses a standard deck of 52 cards. In this video poker variant, deuces (2s) are wild, and they substitute any other card on the deck to form a winning hand. This, therefore, makes winning in this game far much easier, but consequently, the paytable is a bit tighter than other video poker variants such as Aces and Eights or Jacks or Better.

This version of the game can be played like any other and the only difference between it and a game of Jacks or Better is the different pay table and the wild cards. Players can enjoy the game for bets that range from $0.25 per hand all the way to $25 per hand, so it will fit nicely into any casino budget. When selecting the multi-hand version of the game, players will have to bet on each hand that is in play.

Clicking on deal will present the initial five cards and players will then have to choose which to hold in order to create the best possible hand. Payouts with this game will start with three of a kind and there is a special payout for getting four Deuces. All rewards will be credited to the balance and the game also offers an autoplay feature for the ability to play multiple hands at the same wager.

Symbols on the video poker game are obviously the cards. Players may hold all five or discard up to five cards to receive new cards in the quest for a better and winning hand.

Video poker games do not typically have any bonus rounds, but this game does have some nice features that can boost payouts.

If you are dealt a hand with four deuces, hold all five cards, as you cannot improve this hand anyway.

If you are dealt a hand with three deuces, which is highly unlikely, then you can choose to hold all five cards or go for Five of a Kind or a Royal Flush.

If you are dealt a hand with two deuces, keep the two deuces and draw new cards; or keep any of the four cards to a Royal Flush. Always hold any Four of a Kind or better.

If you have no deuce, hold the highest paying hand. As you do this, never hold four cards to a Royal Flush if you already have a lower paying hand.

Deuces Wild is an interesting and highly-interactive video poker variant offered both online and at land-based casinos. Mastering play is actually relatively simple and can be a lucrative game if the above strategies are applied. Always play Deuces Wild on a full pay table to get better payouts on winning hands.

he game has a maximum jackpot of 4 000 coins, which is awarded for the highest-paying combination – Royal Flush, at the highest bet level. The Royal Flush must be natural, meaning it should not have wild cards in it. In most games with wilds pairs are not winning hands and since all the Deuces here are wild cards, the lowest winning hand is three-of-a-kind. There are no double or other extra features, which makes for a clean-cut and simple gameplay.