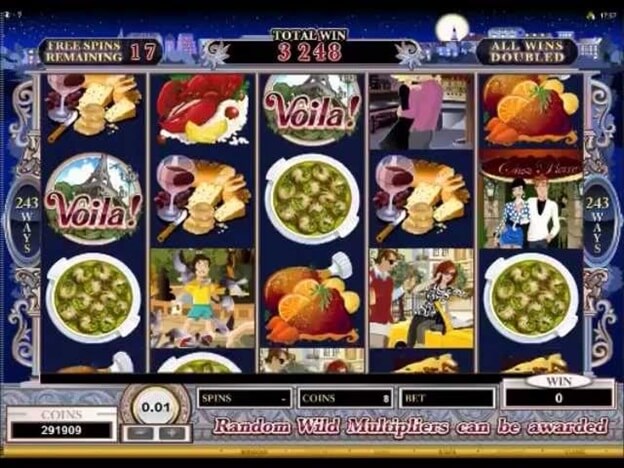 Featuring a French theme, this Microgaming slot game will entertain all the players who enjoy everything related to France and to love. It is already known that France is considered to be one of the most romantic country in the world and this is exactly what this game depicts. With symbols such as the Eiffel Tower, Euro Coins, couples of all ages and French cuisine dishes, this game will bring a French touch to the player’s taste for slot games.

The player needs to set the stake in order to play the game. Unlike other games, in this slot game, the wins are not influenced by the stake amount. In this game, there are 243 ways to win, which means that the player cannot activate any lines, but he only needs to set the number of coins and the coin value. After setting the stake, the player will click on the Spin button in order to start the game. The winning combinations pay from left to right on adjacent reels.

The Eiffel Tower Voila! Symbol is used as the Wild symbol in this game and it can replace any symbol on the reels, with the exception of the scatter symbol. Also, when the wild symbol is used to complete a winning combination, it will display a random wild multiplier, which can be of 2x, 3x or 4x.

The Eiffel Tower is not only the wild symbol in this game, but it is also the symbol that can bring the player the jackpot win of the game. Five wild symbols on the line will reward the player with the jackpot prize of 1500 credits.