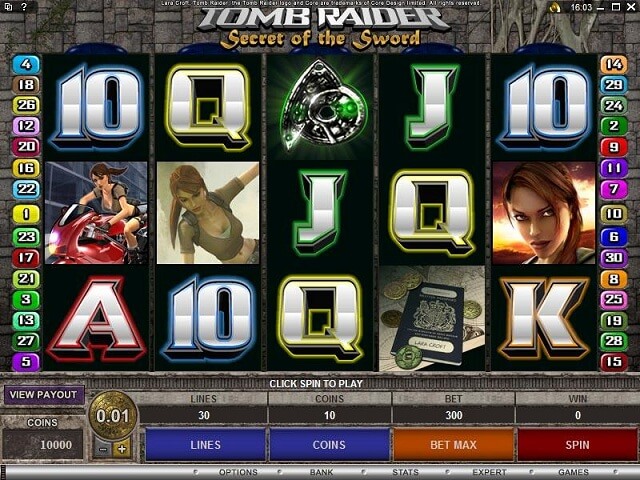 Tomb Raider II: Secret of the Sword takes players back into the adventurous world of everybody’s favorite tomb raider, Lara Croft. Follow the busty explorer’s lead as she searches for the famous lost sword that has eluded her thus far. Will she (and you) find the riches she looks for? You can only find out by playing at Microgaming casinos, such as River Belle Casino, All Slots Casino and others.

Tomb Raider II is the rare sequel to a video slot game, and this installment was demanded by the many fans from Canada and elsewhere in the world who couldn’t get enough of the first game. This time, Lara brings even more features with her, while doubling the paylines from 15 to 30. Tomb Raider-style symbols join her again, many of which feature Lara in various poses, including a close-up, a pose of her with her signature dual pistols drawn, riding a jet-ski and wearing a seductive black dress against the silhouette of a bustling night skyline.

Like with the first game, symbols such as Lara posing or the passport symbol animate when you win. Further symbols include the typical 10, J, Q, K and A, which can be used to make lesser winning combinations.

As stated before, Tomb Raider II doubles the paylines from the previous game, while allowing you to play ten coins per line. As such, the coin values have been scaled back a bit and are now available at 1 cent, 2 cents, 5 cents, 10 cents and 20 cents. You can bet the max amount of coins at the max coin value on all fifteen lines for $60 per spin, or bet all lines at 10 coins each with a 1 cent coin value for $3 per spin (values given in CAD).

The largest natural jackpot in Tomb Raider II is 7,500 coins.

To win the jackpot of 7,500 coins, you have to give five of the jackpot symbol, which in this game is the close-up image of Lara Croft. This symbol is also the wild symbol.

In addition to the wild symbol, which can substitute for all except the scatter and passport symbols, there is also an artifact symbol. This is the scatter symbol in the game, which gives you ten free spins if you get three or more across the various reels.

Finally, the passport symbols are important because with each one you get on the middle payline, you activate that reel. The game keeps track of which reels you have activated, and once you’ve got them all, there is a fun bonus stage.

Tomb Raider II features two bonus games: a free spins game and a Global Adventure game. The free spins game is achieved with three or more scatter symbols, which gives you ten free spins. The free spins game is really unique and works like this: when you win, the winning symbols explode and drop, adding new symbols to the reel. This means you can have consecutive winning combinations, which increases your multiplier. You can win a 375,000 coin jackpot this way.

The Global Adventure game triggers when you have activated all five reels with the passport symbol throughout your time of playing the game. You get to choose your location from a map when you’ve done this, including London, Tokyo, Nepal, Bolivia and Ghana. Once you have picked, you pick from several symbols to reveal either prizes, a piece of the sword, or traps. If you get prizes, you can win multipliers or more. Two trap symbols ends the bonus game. Picking a piece of the sword allows you to pick another location, where you can try to find more of it. When you find the entire sword, you get additional bonus money awarded to you.

Tomb Raider II: Secret of the Sword really shows us how great a video slot game can be. With truly state-of-the-art bonus games, great sound effects, immersive music and animations to go along with one of the greatest characters in video games, this game is a can’t miss. Play it as soon as you get a chance.