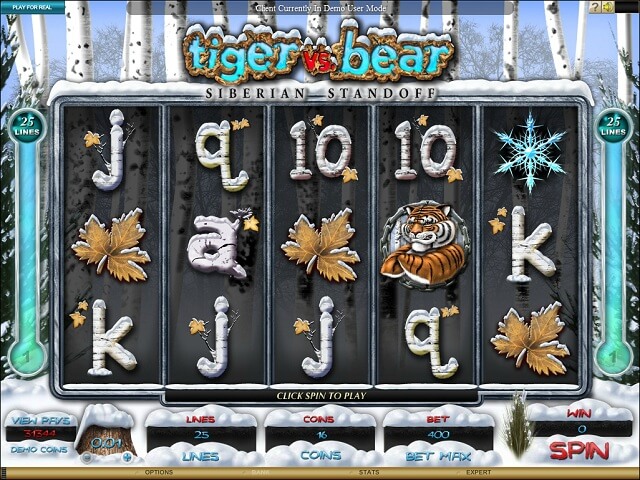 Tiger vs. Bear, or Tiger vs. Bear: Siberian Standoff takes two of nature’s most feared animals and throws them into Siberia to do battle while you look on and hope to hit the jackpot. The frozen tundra of Siberia not only makes for the perfect place for such an iconic clash of animals, but also the perfect place to make some money with a few lucky spins.

The frosty design of this Microgaming video slot begins with the backdrop, which features tall trees and deep snow, along with billowy piles of snow forming the buttons that you click for such features as Bet Max, setting coins for your bet, or just spinning the reels themselves.

The symbols continue this dedication to frosty nature imagery, with snowflakes, leaves, claw marks, and of course, the tiger and bear themselves (both with arms confidently- and comically- crossed) included. The typical 9, 10, J, Q, K, and A symbols are included, with snowy, lower case styling to set them apart from similar symbols in other games.

Coin ranges start at just 1 cent and go to 20 cents, with values such as 2 cents, 5 cents, 10 cents and so forth in between. Furthermore, with 20 coins per line to bet, you can certainly control the amount you wish to play with on each spin. A maximum bet covering all available paylines would cost $100 per spin, but you could also play all lines at a penny per line for 25 cents CAD.

The largest regular win is 750 coins, although that is just for betting one coin on the winning payline. With a 20 coin per payline bet, you would win 15,000 coins, which is a pretty decent haul.

To win the largest regular prize of 750 coins (on a one coin bet), you need to get either five Bear or 5 Tiger symbols. Furthermore, a multiplier based upon the bonus game that we will discuss later can multiply your winnings by 2x, which means you could then win 1,500 coins (or 30,000 with a 20 coin per line bet).

The wild symbol in Tiger vs. Bear: Siberian Standoff is the claw mark symbol which has “WILD” written on it. It substitutes for all symbols except for the scatter, and also doubles your win when it substitutes within a winning combination.

The scatter symbol is the Tiger vs. Bear logo, which pays no matter what position it is in and is multiplied by your total wager.

With a name like Tiger vs. Bear, you’re going to expect to see a standoff between these two stalwarts of nature, and you won’t be disappointed. When the Tiger or Bear appears anywhere on reel one and the other animal appears anywhere on reel five, the Siberian Battle feature begins. At this point, you select either the tiger or bear and see who wins in what can only be described as an epic arm wrestling contest out in the snow.

If the tiger is picked and wins, 8 free spins are awarded in the Tiger Free Spins feature, otherwise you simply get 4 free spins. If the bear is picked and win, you get a 2x multiplier. If the Bear Feature is picked, you get a screen of bear claws and you have to choose them one-by-one until a stopper is revealed, which stops the bonus game (duh) and gives you the prizes you have earned.

Tiger vs. Bear is a great game with an inventive take on the natural rivalries that we see between many animals in the wild. The Siberian location provides a very catchy theme that players will enjoy, and hidden beneath all of the polish is the very real possibility of getting big wins.