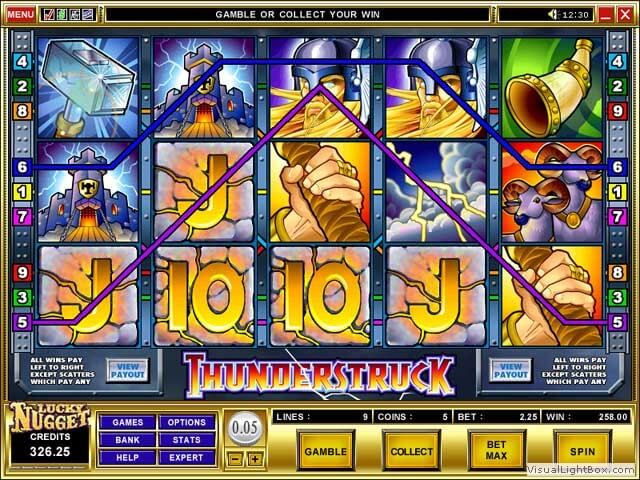 Thunderstruck is a fun video slot developed by Microgaming that takes you deep into Norse mythology with appropriate symbols, music and effects. The game, which can be played at Microgaming casinos such as All Slots Casino, River Belle Casino and All Jackpots Casino (as well as others), is a 5-reel, 9-payline slot with some nice features.

Thunderstruck uses symbols from Norse mythology, including lightning, a war horn, a castle, a powerful hammer and the mighty Thor himself. The music heightens the drama and the game is very simple to play and understand, though it has a nice set of features for a 5-reel, 9-line video slot. Canadian players and others from around the world are sure to enjoy the free spins that can be win, as well as the gamble mini-game.

Players can select between a wide variety of coin values in Thunderstruck. They start at just 1 cent and include 2 cents, 5 cents, 10 cents, 20 cents, 25 cents, 50 cents, $1 and $2. Since you can bet up to five coins on each of the nine paylines, the maximum bet is a whopping $90 per spin. You can win 10,000 coins when you hit the regular jackpot.

In order to win the 10,000 coin jackpot, you must get five Thor symbols on a single, active payline. Of course, if you hit the jackpot during free spins that you’ve won, you can triple it and win 30,000 coins instead.

Thor is the wild symbol in the game, and can substitute for any other in-game symbol except the scatter symbol, which is represented by the Rams symbol. If you get at least two scatters, you win coins, and if you get three or more, you win free spins.

Thunderstruck allows you to earn fifteen free spins with the scatter symbol, and free spins can be re-triggered while you are using them, too. During the free spins, your wins are tripled.

While the theme is not the most amazing, there is a solid slot game here for anybody who is interested, and if you like Norse mythology, you’ll definitely want to give Thunderstruck a try. The game can be very addictive and the jackpot is pretty nice, as well.