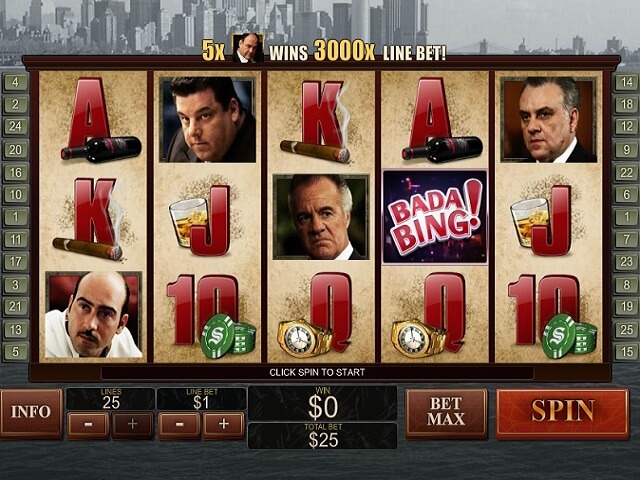 The Sopranos is an intriguing video slot game that seeks to capture the drama and style of the classic HBO drama that won a total of 21 Emmy Awards and 5 Golden Globes while it aired between 1999 and 2007. Canadian fans of The Sopranos will certainly enjoy being able to visit their favorite cast members again in the form of this Playtech slot game.

Since The Sopranos is a Playtech slot game, you will need to go to one of their casinos in order to enjoy the game. These casinos include Bet365 Casino, Omni Casino, BetFred Casino, and others.

At first, you may be surprised that The Sopranos has a fairly minimized feel when it comes to its design. The background that drapes around the game screen is just a backdrop of New York, with the harbor at the bottom and skyscrapers at the top. The symbols include all of your favorite characters, including Christopher Moltisanti, Paulie “Walnuts”, Bobby “Bacala”, and of course, Tony Soprano himself.

You’ll also find video footage from the show that is much expected if you have played these types of video slots before. There is also your typical theme music and sound effects, which are mostly unobtrusive. The game features your usual five reels and twenty-five paylines and has some bonus features to dig your teeth into, as well.

The Sopranos Coin Values and Jackpots

The Sopranos has a wide range of coin sizes that will be unlike what you have probably seen in most video slots, whether you are a Canadian player or someone who lives elsewhere around the world. The coin sizes start pretty hefty at 20 cents minimum and go all the way up to $10 per coin!

Furthermore, with 25 paylines to cover, it’ll cost $5 per spin to play all 25 even at the smallest coin value, which kind of limits this slot game’s appeal to some players, who would rather play for longer and not spend so much. The maximum bet would be $250, which is something you won’t see in many video slots, for sure.

The game has a maximum jackpot of just 3,000 coins. That is likely because there are so many bonuses to be found in this game that you are looking for bonuses and multipliers to really rack up the coins, not a normal jackpot.

It’s not a big surprise that the most valuable symbol in the game is that of Tony Soprano. Get five of Tony Soprano’s mug on an active payline, and you’ll earn 3,000 coins in one fell swoop. It’s pretty simple, but it really underscores the importance of the bonus games.

The Sopranos really comes into its own when it comes to special symbols and bonus games. The wild symbol is the Tony Soprano symbol, which is obviously recognizable to anyone who ever watched an episode of The Sopranos, or even was aware of the show. It substitutes for all symbols except other special symbols.

The Sopranos logo is the scatter symbol, and if you get three or more of them, you enter the free spins game, which has multiple modes that we will discuss in a bit.

The Sopranos is really all about bonus games. Even the free spins feature, which is triggered by getting at least three Sopranos logos, is blown up into a real bonus game. Once you get into free spins, you have to pick between four different free spins modes.

The first is the Soldier version, where you get 25 free spins and Christopher is an extra wild symbol, and any Christopher symbol in the middle spot of any reel adds five free spins. The Capo version gives you 20 free spins with a random multiplier between 2x and 5x. Free spins can’t be re-triggered in Capo, but Paulie symbols increase your multiplier.

Bonus games include the Bada Bing bonus, where you get five characters to pick from, all of whom want to talk to Tony. You see a scene from the show after you pick and then get your reward. The Stolen Goods bonus has you pick a shipping container to reveal a prize, with the chance to ditch it and pick a new one up to twice.

The Sopranos is really a full-featured game. The bonus games are just about second to none, and fans of the show will love the game for sure. The only drawbacks are that it’s a bit expensive to play, and if you want a simple slot game, this surely isn’t it. Everyone else will likely have a blast playing, though.