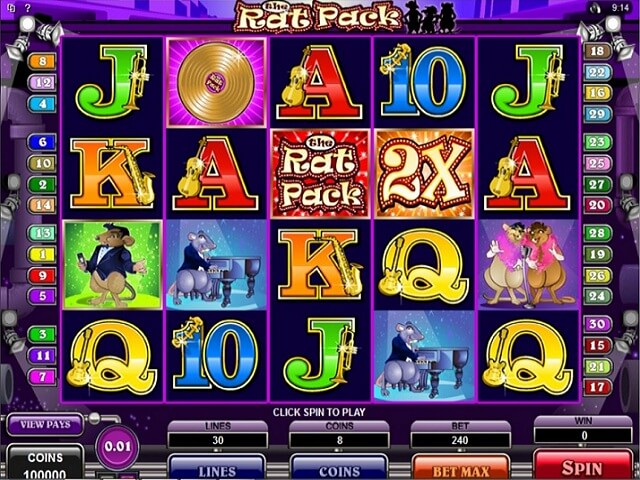 The Rat Pack takes you back to the days of Frank Sinatra, Sammy Davis, Jr., and the others, with a world full of swing music, fancy outfits, and dazzling performances. Of course, in typical Microgaming style, it’s not the members of the infamous group of pals that are immortalized in this video slot, but actual rats who loosely play the parts of the real life Rat Pack.

You can play this Microgaming video slot at all Microgaming-based online casinos, including Casino Action, Bet365 Casino, River Belle Casino, and many others.

The Rat Pack features symbols of tuxedo-clad mice playing the piano, singing tunes, dancing animatedly, and so on. Vibrant colors are accented throughout with spotlights and glittery effects, even with the sparkly 10, J, Q, K, A symbols, which feature golden instruments next to them, as well.

You’ll hear some fun, upbeat swing style music as you play, too. The music, along with the animations and sound effects, really add to the fun of the game as you play and make your best effort to win one of the game’s larger prizes.

While 1,000 coins as a base value isn’t the largest jackpot around, what’s nice in The Rat Pack is that three different symbols can give you that prize instead of just one or two. There are three rats in the game who are shown on stage singing, with different poses and background colors (red, orange, and green). All three give you 1,000 coins when you get five on an active payline.

Like I mentioned earlier, the wild and scatter symbols are really the key to huge payouts in this game.

There are actually two wild symbols in The Rat Pack, one of which is the game’s logo and substitutes for any other symbol but the scatter, as you might expect. However, the second wild symbol is a 2x symbol, and not only serves as a wild symbol, but also doubles your win.

The scatter symbol is a golden record, and when you get three or more of them, you trigger free spins. In the free spins, all of the scatters are held in place while the other reels spin normally. Then, the scatters nudge down one spot and the reels spin again. This continues until there are no more gold record symbols visible on the reels.

The Rat Pack is a solid video slot that is great for players who aren’t easily wooed by glossy bonus features, but instead just want a nice, basic slot game where you can win a decent amount of money. Furthermore, the fun theme is very original and the presentation, as usual from Microgaming, is top notch.