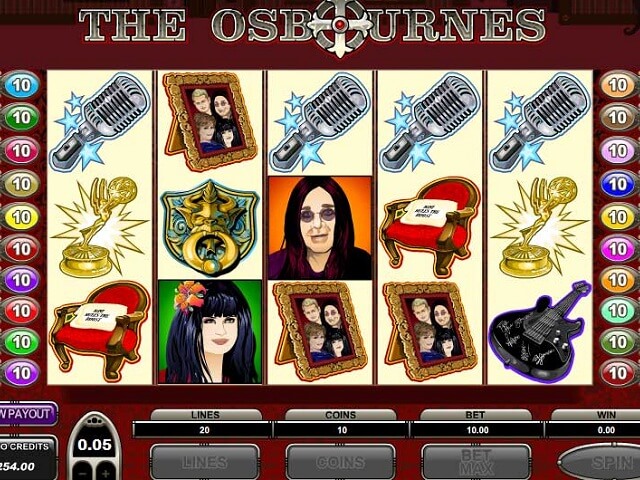 The Osbournes brings the world’s favorite dysfunctional family into online casinos everywhere, complete with the power of Microgaming. As a game that has been around for several years now, The Osbournes is clearly not just a fad but a very good slot game that just happens to have a memorable and instantly recognizable theme. You can check this slot out at Microgaming casinos such as Golden Reef Casino, 777 Dragon Casino, Royal Vegas Casino and many others.

If you are familiar with the first family of metal, especially from their trail-blazing reality show (which led to many imitators), you will be instantly familiar with The Osbournes slot game, too. While the family is more popular in Canada and throughout North America, as well as Europe than they may be in some other countries, this is a solid slot game nonetheless.

Each of the four family members, plus the family pet, is immortalized as a symbol in the game, along with other symbols, such as a music award, microphone, family photo and guitar.

The Osbournes Coin Values and Jackpots

The Osbournes sign is the wild symbol in the game, and can substitute for all of the symbols in the game with the exception of the two (yes, two) scatter symbols.

The scatter symbols don’t just increase your winnings; they also get you into The Osbournes’ two bonus games. With three or more Mini icons, you get ten free spins, during which your winnings are doubled. The mini game here charges you with finding Mini by following her trail. When Mini appears on the middle three reels, you go one more step. With every five steps, you reach a new member of the Osbournes and get your free spin counter reset to ten, plus you receive a bonus prize.

With the Door Knocker symbols, once you get three on one spin you enter the Knock Knock Bonus, where you need to reveal the Knocker with the biggest bonus possible.

Finally, you will randomly see the Grab a Gift bonus feature triggered when playing the game from time to time. Then, you’ll see four gifts alternate on the screen, flashing quickly. When you hit the stop button, you’re given the gift that stops on-screen, which multiplies your total bet from 2x all the way to 30x.

Microgaming could have mailed in their effort on this one and relied on the show’s notoriety to make this game a success, but they didn’t and it shows. This is a great game with fun bonus games, nice payoffs and a fun theme that is consistent throughout. Definitely give it a try when you have the opportunity to do so.