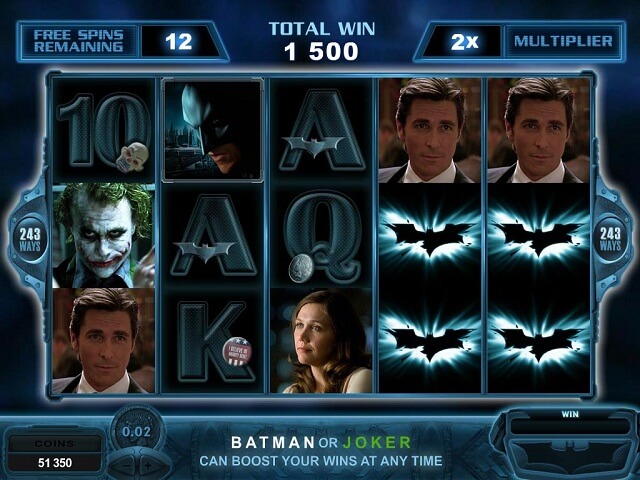 The Dark Knight capitalizes on the brilliant film trilogy based upon the legendary superhero known as Batman, as you will enjoy a theme, imagery, animations, and sounds that evoke the second of the three films, which featured Heath Ledger as the Joker. In this game, the unpredictability of Gotham City is apparent, as either the Batman or Joker can show up at any time to award you prizes.

Microgaming is the creator of this new blockbuster slot, so you can play The Dark Knight at Microgaming casinos, like 32 Red Casino, Lucky Nugget Casino, Vegas 7 Casino, and many others.

The Dark Knight is a 5-reel slot. It uses Microgaming’s popular 243 ways to win feature to provide hundreds of possible winning combinations with every spin, adding to the excitement as you play. The game features actual images from the film, including actors like Christian Bale (both as Bruce Wayne and in full costume as Batman), the Batman symbol, and so on. Familiar symbols like the J, Q, K, and A are seen, too.

As you play, you will enjoy the kind of animations, sound effects, and music that you would expect with such a blockbuster video slot experience. Everything here is top notch, and playing this slot game is like being brought into the film.

The coin values are very limited, as you can only choose between 1 cent and 2 cents for them. However, you can bet up to $6 per spin, since you can bet 10 coins per line on the 30 official paylines of the game.

There are two types of jackpots in The Dark Knight: the regular jackpots and the progressive ones. The biggest regular jackpot is 15,000 coins (at one coin per line wagered), although with free spins and other bonuses you can win up to 4,000,000 coins.

Winning the standard 15,000 coin jackpot is easy: simply get five symbols showing a Joker face spray-painted against a white brick wall on an active payline. To earn more than that in the regular game, you will need multipliers from the game’s free spins mode, which we will talk about later on.

The progressive jackpots are awarded mostly at random, as you can be pulled into a special screen at any time that shows a large wheel, with Batman standing on one side and Joker on the other. First, you have to choose your side, as each character has their own stopper, and then the wheel will spin. The panel that the stopper lands on when it is done spinning will indicate which of the four levels of progressive jackpots you have won.

The wild symbol in The Dark Knight is the Batman symbol, which is instantly recognizable as it creates a white silhouette around its black shape and background. The wild symbol substitutes for all but the scatter symbol, and best of all, it appears stacked no matter what reel it lands on, which gives you a better chance of landing winning combinations.

The scatter symbol is the Joker’s spray-painted image against the white brick wall, which you’ll remember is also the most valuable symbol in the game. When you get three or more of them, you will win 15 free spins. Best of all, you get a 2x multiplier to start with during the spins.

Besides the random progressive jackpot bonus feature that we discussed earlier, The Dark Knight also offers random appearances by Batman and the Joker alike. What happens is that when your spin is occurring, one of the two characters may just walk right onto the screen and award you a prize. It makes the game all the more exciting and unpredictable. Then, of course, there is the free spins mode, which gives you a multiplier to help you rack up nice wins, although free spins can’t be re-triggered.

A movie as epic as The Dark Knight required a video slot that is just as brilliant, and Microgaming didn’t disappoint. The mood, theme, animations, symbols, and sounds all work in concert to provide a film-like experience, and nice touches like the random appearances of Batman and Joker add even more to the game’s appeal. Throw in some nice progressive jackpots, and you have a winner.