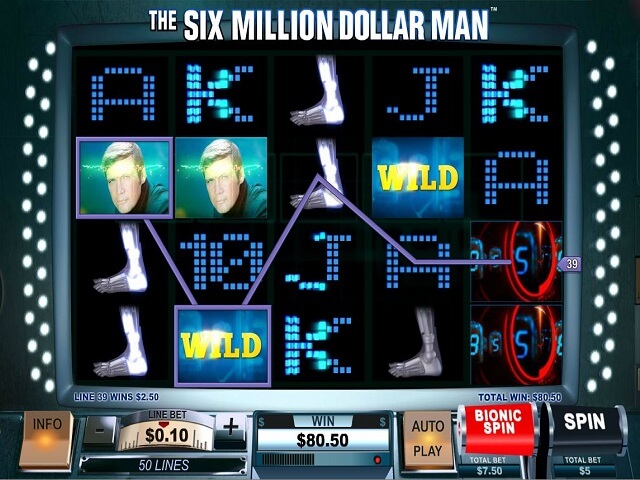 The 6 Million Dollar Man is a bit of a surprise, as you don’t often see new video slot games, especially from a company the stature of Playtech, that are based upon decades-old television shows. A game like this is intriguing, because you want to find out whether the slot has appeal to those who don’t remember the television show from the 1970s.

This Playtech-designed slot game is available for play at casinos such as Gala Casino, as well as many others. Check with your Playtech casino of choice to see if they offer this new slot game.

As mentioned earlier, The 6 Million Dollar Man is a show that has kind of found obscurity in the last couple of decades, but was very popular in the 1970s. It starred Lee Majors as a former astronaut with bionic implants (that today would likely cost much more than $6 million) who gets in all sorts of adventures.

The game is actually pretty stylishly-designed with a vibe that perfectly matches the “high-tech as imagined in the 1970s” theme of the show. Symbols include x-rays of the improvements made to the lead character, Steve Austin, along with pictures of him, and the 10, J, Q, K, and A symbols, shown in dot matrix form.

You can’t fault The 6 Million Dollar Man for a lack of betting options. With 50 lines to play and coin values that range from 1 cent all the way to $5 per coin, you can bet as little as 50 cents or as much as $250 per spin to play all of the paylines.

The game features a jackpot of 4,000 coins, but that number can be much more if you add in mutlipliers and other factors.

In order to get the highest winnings in this game, you will need to get symbols like Lee Majors himself, which represent the more valuable earnings opportunities in the game. You’ll need five of them across an active payline to cash in, of course.

The wild symbol is a picture of Lee Majors himself, and substitutes for all symbols except the scatter. There is also the Oscar Soldner symbol, which is Majors’ boss and appears stacked on all reals and can give you nice prizes, too.

This video slot does not have a true bonus game, but it has both a free spins mode, where you can try to get a bionic leg, arm, and eye across your spins to get two extra free spins. There is also the bionic spin feature, which ups your bet by 50%, but also guarantees that you will get between 0 and 5 random wild symbols per free spin, offering a chance of higher payouts.

This game is obviously marketed toward those who really enjoyed the show in the 1970s. If you aren’t among the fans, you may or may not find the game worthwhile, although the prizes can be decent when you start racking up free spins. Fans of the show should definitely check out The 6 Million Dollar Man, of course.