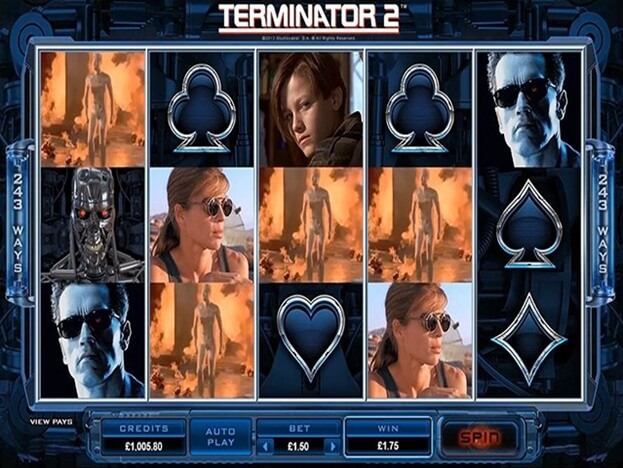 Microgaming has prepared a surprise for the fans of Terminator movies: the Terminator 2 slot game, which can keep the players entertained for long time, while they also have the chance to win cash prizes. This game features a theme based on the famous Terminator movie, so that the symbols in the game are also related to the movie. The base game has 243 ways to win, while during the free spins, there are 1024 ways to win.

The player first needs to set the bet amount, by choosing the number of coins and the coin value. After the bet is set, the player can start the game by clicking on the Spin button. In this game, the player wins if a certain number of similar symbols appear from left to right on adjacent positions on the reels. The only combination which pays with the symbols in any positions on the reels is the one made of scatter symbol. Also, for the scatter symbol, two symbols are enough to win.

In this game the logo symbol, which is represented by the T2 icon, is used as the wild symbol, which means that it is able to substitute for other symbols in the game, except for the scatter symbol and the T-1000 special symbol.

The scatter symbol in this game can appear in any positions on the reels to payout, as long as at least two symbols are scattered. If at least three symbols appear, then the player is awarded 10 free spins, with 1024 ways to win. Also, during the free spins feature, the T-1000 is a special symbol and it can turn into any other character symbol available in the game, so that it awards the highest possible win.

The T-800 Vision is another special feature in the game and it is randomly triggered in the base game when there is a non-winning spin. During this feature, if a single scatter symbol appears on the reels, it will trigger the free spins feature.

In the Terminator 2 slot game, the scatter symbol is the highest paying symbol, so that if 5 scatter symbols appear, the player wins the jackpot of 3000 credits. The second highest jackpot in the game is of 1500 and it is awarded when five wild symbols appear on consecutive reels.