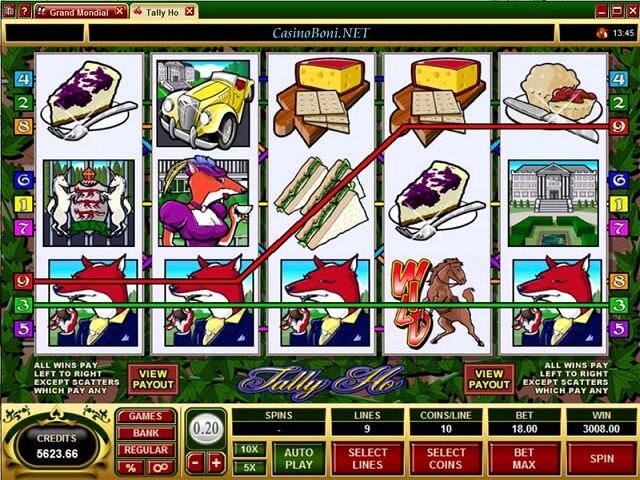 Tally Ho provides a world of fabulous luxury, along with some other somewhat less commonplace elements, like a fox with boobs. Yes, there’s Tally Ho features a fox/woman hybrid in a dress, as apparently the game’s fancy rich folks are actually foxes.

Tally Ho is a Microgaming slot, and thus can be found and played at Microgaming casinos such as Casino Classic, Golden Tiger Casino, Platinum Play Casino, and many more.

Tally Ho’s imaginative world is brought to life with colorful illustrations, along with a simple, but pleasant border that features leaves to play up the nature element of the setting. Sound effects include horses and birds singing in the background, along with trumpets blowing and other effects when a win occurs.

The symbols are all evocative of the game’s setup, with a mansion, Rolls Royce, fancy foods, and more to symbolize the wealth of the characters. There are also the two main foxes in the game, a male who is dressed in a fancy suit, and the afore-mentioned female fox who is wearing a low-cut dress and for some reason, has fox boobs.

Microgaming video slots often provide Canadian players and others plenty of betting options, and this game is no exception. You can bet up to ten coins per line, with coin values ranging from 1 cent all the way to $1, with values such as 2 cents, 5 cents, 10 cents, and 50 cents in between.

The regular jackpot is 6,000 coins, but you can actually win 24,000 coins instead if you nail the jackpot during free spins, when wins are quadrupled. Of course, if you bet ten coins per line and win the jackpot, you can win 60,000 coins (240,000 with the free spins multiplier).

To win the highest prize in Tally Ho, you will need to keep an eye out for the wild symbol, which is also the most valuable symbol in the game. The wild symbol is that of a bucking horse, appropriately enough. If you get five of them on an active payline, the jackpot is yours.

The wild symbol, which we already talked about, can substitute for any other symbol other than the scatter. It also doubles wins when it substitutes to help create one, which is a nice touch.

The scatter symbol is the trumpet, which is the key to earning ten free spins. Get three or more and you’ll activate free spins. If you get two or more scatter symbols anywhere on the reels, you will also win coins based on the number of credits you staked and added to your payline wins.

The ten free spins are a nice bonus, and best of all, they can be re-triggered within the free spins mode itself. Also, don’t forget that your wins are quadrupled while the free spins feature is active.

The other bonus feature is the simple gamble feature that is present in many Microgaming video slots. You can double or even quadruple your win by predicting either the color or the suit of a concealed playing card.

Tally Ho is a charming video slot game that has a fun (if a little creepy) theme and plenty of ways to win nice prizes. It’s got a nice variety of special symbols, a good free spins feature that can be re-triggered, and other elements that players will enjoy, and thus can be safely recommended to most players in Canada and worldwide.