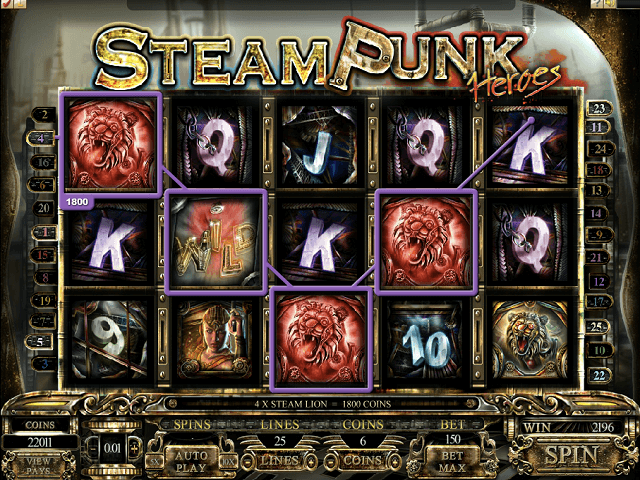 Steam Punk Heroes is a stylish and unique video slot game that transports you to a fantastic fantasy world where you can be entertained while you spin for huge prizes. This game can be played at Microgaming casinos such as Casino Action, Luxury Casino, Phoenician Casino, and many others.

Steam Punk Heroes is a video slot by Microgaming that incorporates the very popular elements of “steampunk”, a genre of storytelling that incorporates elements of futuristic horror, Victorian design, and state-of-the-art science fiction into a blend of fictional fantasy. In this game, the style and heart of steampunk is alive and well, and those who are familiar with the genre, as well as those who aren’t, will feel right at home.

As usual, the production values here are top-notch, with a similar user-friendly layout to what you would expect after playing other Microgaming slots. Intriguing sound effects and music heighten your senses while the symbols, which include a beautiful steampunk girl and plenty of dark imagery, immerses you in the game’s world.

Steam Punk Heroes boasts a nice range of coin values and betting amounts to choose from. Coin values, as usual, start at just 1 cent and go up to 20 cents, with increments such as 2 cents, 5 cents, and 10 cents in between. Since you can bet up to ten coins per line and play up to 25 paylines, the maximum bet is up at $50, while you could also play all 25 lines for just 25 cents per spin, if you wanted.

The highest regular jackpot in the game is 2,000 coins, although that win amount is based off of a wager of one coin per line. If you bet ten coins per line, the jackpot would jump up to 20,000 coins, which is worth $4,000 at the highest coin value allowed in the game. It’s not a bad sum, but more can be won with the right timing and luck.

The highest jackpot is attained by getting five wild symbols (which are simply the letters “WILD”, so it’s easy to quickly identify the symbol) on an active payline. Multipliers during free spins can make the jackpot and all other prizes worth much more, as well.

As mentioned earlier, the wild symbol literally says “WILD” on it, so you really can’t miss it. Best of all, when two or more of them substitute in a winning combination, the win is doubled.

The scatter symbol is the game’s logo, and pays as long as you get two or more on any reels in a single spin. If you manage to get three or more, you will get into the free spins mode of the slot game, which is where you can really rack up some big bucks.

While not the most exciting bonus game, the free spins game of Steam Punk Heroes can be very lucrative. When you trigger free spins, you first get presented with two gears (a common element of steampunk imagery). You pull one to decide your multiplier, and the other to determine your number of free spins.

If you enjoy the style of steampunk or just want to try something different, you can’t go wrong with Steam Punk Heroes. While the game doesn’t boast the most enticing regular jackpots, wild bonuses and multipliers within the free spins round can make things very interesting in no time flat. This is another great video slot by Microgaming that begs to be enjoyed by players from Canada and all around the world.