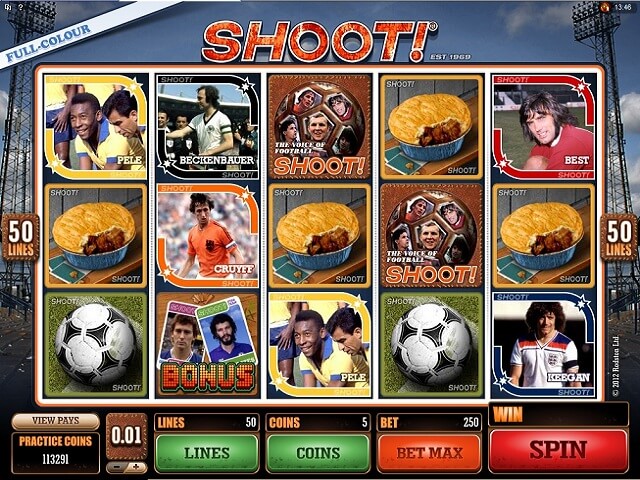 Shoot! takes the world’s most popular sport and somehow crams it into an appealing video slot that can be truly enjoyed by fans in Canada and around the world. In Shoot!, you will take the pitch along with soccer legends and hope to not only score goals, but also an abundance of coins, as well.

This fun Microgaming video slot can be played at any casino running on Microgaming’s software, such as Casino Kingdom, Cabaret Club Casino, Vegas Joker Casino, and many others.

Shoot! not only takes you into the world of soccer, but features undisputed legends of the game, such as Pele, Diego Maradona, Johan Cruyff, Franz Beckenbauer, George Best, and Kevin Keegan. The players in the game are immortalized as symbols that have the style of collectable trading cards. There are also other appropriate symbols, such as noise makers held by excited fans and, of course, soccer balls.

Furthermore, aside from the great symbols, trading card theme, and authentic crowd roar sound effects, this game is notable for having 50 different paylines that can grant you with nice winnings on any spin.

Like many other Microgaming slots, Shoot! is highly customizable in terms of your wager amounts. You can bet on all fifty lines for just 50 cents, or step it up to $100 by betting 20 coins per line on all of the lines with a max coin value of 10 cents. Coin values can be set at 1 cent, 2 cents, 5 cents, and 10 cents.

To win the 150,000 coin base jackpot, you have to get five of the game’s wild symbols on a single, active payline. The wild symbol is the Shoot! logo, by the way. There is also a 200,000 jackpot when you get five of the scatter symbol across an active payline. You can win even more by getting a winning combination during the free spins round, where wins are doubled automatically.

As mentioned before, the wild symbol is the Shoot! logo, which also features a soccer ball in it. The wild symbol will substitute for any symbol besides other special symbols.

The scatter symbol is represented by a pair of soccer trading cards with the word “BONUS” written on the bottom of the symbol. If you get three or more scattered anywhere on the reels, you trigger the Shoot! bonus game.

The two bonus games that can be triggered are the Free Spins game and the Magazine bonus game. In the free spins game, you get a random number of free spins with which to get free prizes, while all of your wins are doubled during them. The Magazine bonus game allows you to flip through old school soccer magazines to reveal prizes before hitting a dreaded red card symbol that will end the game and send you back to normal play.

Even those who are not huge soccer fans will enjoy Shoot! for its large jackpots, reasonable wagering amounts, fifty paylines to play, and fun bonus games. Fans of the sport, however, will love the game even more for the way it incorporates a fun theme and legendary players into a very good slot experience.