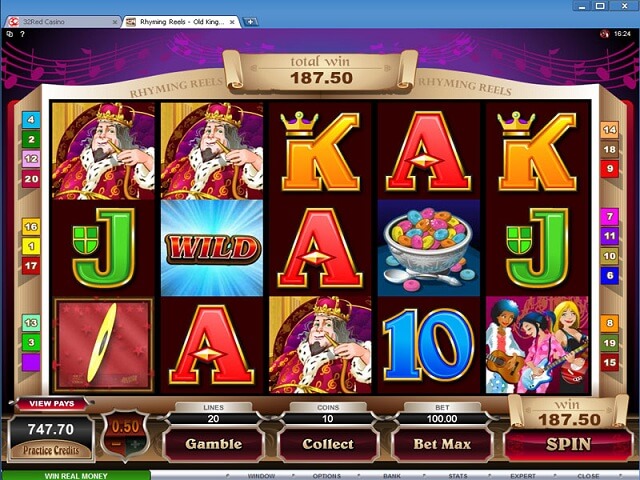 Rhyming Reels- Old King Cole is one of the Rhyming Reels series of Microgaming-made video slot games. The series has been revered for its refreshing takes on classic traditional songs, and this game is certainly deserving of the same type of praise. Fans can play this game at Microgaming casinos such as Ruby Fortune Casino, Mummy’s Gold Casino, Golden Riviera Casino, and many others.

The whimsical, fun atmosphere of this amusing game begins with the visual elements, which are all very bright and colorful. The game has the same kind of user-friendly layout as other Microgaming slots, including easy-to-find buttons for setting bets, betting the max, spinning, changing coin values, viewing payouts, and more.

The music, of course, takes center stage and completes the effect, along with sound effects that pop up at appropriate times during spins. The special symbols, which include the smiling image of Old King Cole, golden CDs, crowns, and others, join the familiar 10, J, Q, K, and A symbols in play.

The top regular win in Rhyming Reels- Old King Cole is garnered by collecting five of the Old King Cole symbols, which will earn you 900 coins. At a bet of 10 coins per line, you would win 9,000 coins, which would mean a $4,500 win at the highest coin value.

Of course, you can win much more than that using multipliers and other effects from within the game.

If you want to really maximize your winnings in this game, you will hope that everything comes together during free spins, when the 7x multiplier is in effect. When that happens, you could win up to 63,000 coins for a possible $31,500 in winnings in one fell swoop. You can also use the Gamble feature to multiply your winnings, albeit with a steep cost if you lose.

Special features continue to be important to today’s players, who will undoubtedly be satisfied with what this game has to offer. Rhyming Reels- Old King Cole features a wild as well as a scatter symbol for players to enjoy.

The scatter symbol is the king’s crown, which is your key to unlocking the coveted free spins. Get three or more crowns on any reels to unlock 12 free spins, which can be retriggered. Furthermore, two or more crowns also gives you a win to pay out some coins, with 150 coins being the base prize for five crowns.

While there are no bonus games in Rhyming Reels- Old King Cole, there is the standard Gamble feature that Microgaming has in many of its slot games. In the Gamble feature, you can increase any win by guessing whether a card will be red or black. You can also guess what suit the card will be to increase your winnings, but also increase your odds of guessing incorrectly and losing your winnings. It is a big chance to take, but a nice option to have.

Rhyming Reels- Old King Cole is a great game that does the Rhyming Reels series proud. In this game, you will enjoy great special features such as double wilds, all while soaking in the whimsical and carefree atmosphere that the game provides. It is definitely worthy of recommendation.