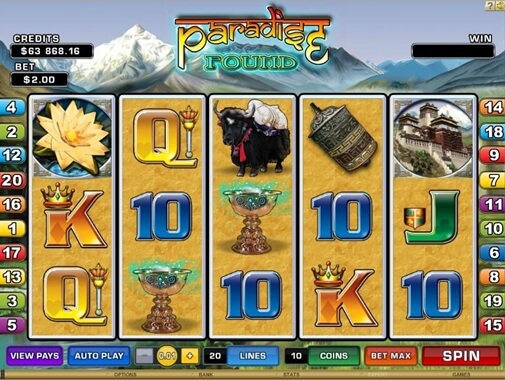 Paradise Found is an exciting slot game having the mesmerizing Himalayan theme. The player can play on 5 reel and 20 payline slot with a chance to hit the jack pot and win the bonus.

Microgaming has introduced many online and animated video-slot games for its faithful users. One of these is the famous Paradise Found which was released in 2013. Paradise Found is based on the theme of the Himalayan Mountains. The use of high resolution textures and fine detailed animated symbols of the exotic mountain range helps in making the theme and the atmosphere come alive for the player. The only sound effects that are provided in the game are those of the slot.

Like many other games by Microgaming, there is a possibility of winning the jackpot. The jackpot in this game is non-progressive; which means that there is a chance of winning maximum payout. The denomination of Paradise Found starts from 0.50 and goes up till 200.00 credits. The maximum payout, however, is 1000 coins.

In order to win the maximum limit jackpot, the player has to complete 3 requirements – One, the player should turn off the free game mode and switch to playing with real money. Then the player has to pitch in with the maximum coin bet and enable all pay lines. And lastly, there should be 5 Yak symbols appearing on an enabled pay line but in succession.

With Paradise Found, you also have a chance to win the bonus if you are lucky enough to get your wild symbol on reel 1 and the Monastery scatter symbol on reel 5 at the same time. This simultaneous appearance of both symbols will then trigger the bonus feature. During the bonus, the reels will be held and only a single slot on reel number 2, 3 or even more will start to turn randomly, consequently awarding the player with the prize.

The Paradise Found is an online slot game featuring the great Himalayan theme which is made possible with authentic imagery like the yak, monastery, Tibetan chalice and lotus flower.