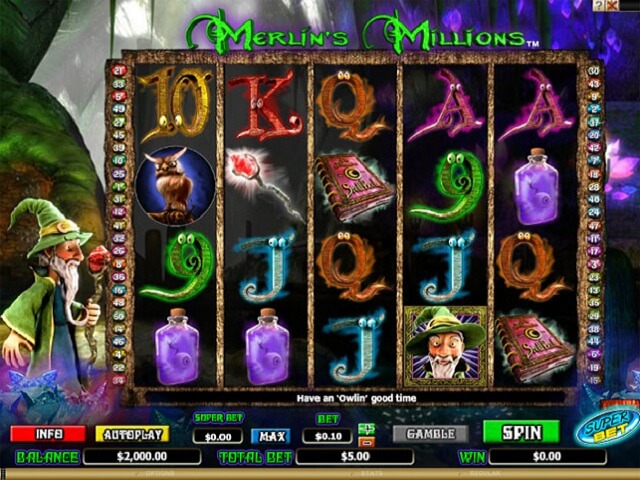 Merlin’s Millions is a colorful 5-reel, 50-payline slot from NYX Gaming that takes on the legend of Merlin the wizard.. The game features whimsical music, enjoyable animations and the allure of grand prizes to keep you playing. You can play this game at casinos such as Rome Casino, Diamond VIP, and Mona Casino

This game is as dedicated to its theme as Merlin is to his study of sorcery, with nice touches such as animations including Merlin casting a spell at you when you collect enough of his symbols, as well as refreshing takes on the familiar 9, 10, J, Q, K, and A symbols that give them eyeballs and a mystic font that looks reminiscent of what you’d see on a Harry Potter book cover.

The personality bursts from this game, and the sound effects and music are just one part. Alongside the game screen is Merlin himself, and he will react to your results as you play. If you don’t spin for a moment, he’ll even playfully knock on your screen to make sure you’re there. Symbols that complete the them include a spooky owl, mystical staff, book of spells, and so forth.

Merlin’s Millions allows a wide variety of coin values, beginning at just 1 cent and going on to 2 cents, 5 cents, 10 cents, 20 cents, 25 cents, and the maximum of 50 cents. The most valuable symbol is the spell book, which is worth 1,000 coins when won at base value. Of course, the value can be much greater with features like SuperBet in place, which boosts the possible winnings by ten times their normal amount!

To get the highest prize, simply get five of the spell books in any active payline. However, to maximize that prize, enact SuperBet, which boosts your wild multiplier that spin. By moving up levels of credit (they go up in increments of 2x, with a max of 10x your bet) you also get that amount as a multiplier for any win that uses the Merlin symbol, which is wild.

Many special symbols await you in Merlin’s Millions. You have the wild symbol, which is Merlin, as mentioned earlier. Merlin always appears stacked on entire reels, and only appears on the middle three reels (reels 2, 3, and 4). He substitutes for any symbols other than the two scatter symbols.

“Two” scatter symbols? That’s right, there are two of them in Merlin’s Millions. The first is the mystical orb, which appears on reels 2, 3, and 4. It pays you coins and also can give you five free games if you get three of them scattered on a single spin. Merlin will even help you out from his spot alongside the screen to enchant symbols (and even entire reels) into wild symbols.

The other scatter symbol is the owl, who appears only on odd-numbered reels 1, 3, and 5. If you get three owls on a spin, you enter the owl bonus feature, which we will discuss in the bonus games section.

The bonus game in Merlin’s Millions is the owl bonus feature, which fills the screen’s five reels with owl symbols. You get to pick symbols, revealing the prizes that you win, until you pick the wrong owl and the word “Collect” is revealed. Then your prizes are totaled and added for you.

Merlin’s Millions is a high-quality video slot game with really impressive animations, sound, and music that really sell the theme (of a mystical cartoon wizard and his adventures) well. Aside from that, the bonus game, helpful wild features, and multiple scatter symbols make this a can’t-miss video slot experience.