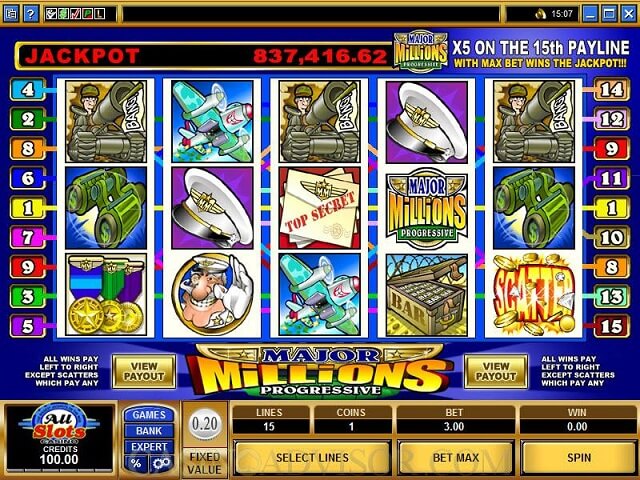 You have likely heard about the attractive Major Millions progressive jackpot, which we will discuss at length later in our review. For now, let’s focus on the slot game itself and what sets it apart. The diverting theme comes with appropriate music and military characters/objects drawn in Microgaming’s signature cartoonish style for symbols. Symbols you will see include top secret intel, binoculars, a battleship, a tank, medals of honor, and the Major himself. In the 3 reel version, these symbols are replaced with the classic bars, sevens, and cherries.

Canadian players from Manitoba to Saskatchewan will surely want to try their luck at winning the attractive Major Millions progressive jackpot. This jackpot is shared between both games, so you can win it no matter which version you prefer. Furthermore, you have to bet the maximum amount to qualify for the progressive pot, and since the max bet is $3 for each version of the game, you are on a level playing field no matter what.

The progressive jackpot seeds at $250,000, but the average win is about $690,000 (CAD values given). In fact, the highest win ever was a staggering $1.8 million! On average, the jackpot is won every four months.

The scatter symbol is only found in the 5 reel game, and is represented by the word “scatter” in gold capital letters with various jewels adorning it. There are no free spins in this game, but you will win a bonus on top of any payline wins when you collect three or more of them on any reels. The bonus is 3x your staked bet for three symbols, 10x for four symbols, and 50x for five scatter symbols.

Major Millions is not so concerned with preparing you for combat is he is for preparing you for a life filled with riches. Follow his orders today by marching to your favorite Microgaming casino, and you could be a millionaire at a moment’s notice.