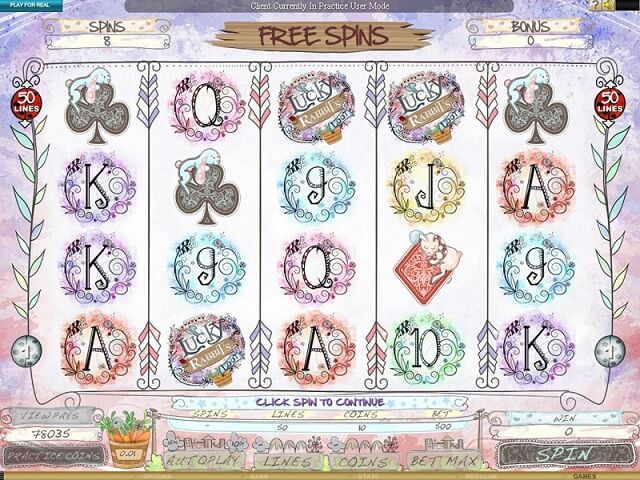 Lucky Rabbit’s Loot is a one of the more original looking video slot games that you will ever see. With a theme that was taken right from a playful children’s book and an art style that is truly innovative in the world of video slots, this is a game that really stands out. you can play Lucky Rabbit’s Loot at Microgaming casinos such as Casino Action, Ruby Fortune Casino, and GoWild Casino.

Lucky Rabbit’s Loot literally looks like it was drawn and colored on a piece of paper. That’s definitely not a knock on the game; it’s a testament to its creative artistic style. The symbols, background and buttons have a colored pencil effect that looks very authentic, and the doodling style of the drawings gives the game its considerable life. The sounds and music are lively and fun, too. The game has five reels with 50 paylines, ensuring frequent wins.

Animations are everywhere, with even basic symbols like the 10, J, Q, K, and A animating when a win occurs. Clouds move on the top of the screen as a car playfully drives across the road. The music is largely that of acoustic guitars, which pick up in speed and intensity mid-spin when you have a chance of winning a large prize.

In Lucky Rabbit’s Loot, coin values begin at just 1 cent, with other values including 2 cents, 5 cents, 10 cents, and a maximum of 20 cents. Of course, with 50 lines to play and the possibility of betting 20 coins per line, you can bet quite a bit even with conservative coin values.

The most valuable regular jackpot is 1,000 coins, although it can be much larger according to your bet, since that is the base value for 1 coin per payline. With a 20 coin per payline bet, you would win 20,000 coins, or up to $400.

To get the highest prize, you need to get five of the spade symbol, which has a bunny sitting in front of it. This jackpot is also possible with the help of the wild symbol, which can substitute for any symbol besides the scatter symbol. Other symbols with high base values include the heart symbol (750 coins) and diamond symbol (750 coins).

The wild symbol is a heart with “WILD” written in it with colorful, stylish letters. It substitutes for all symbols except the scatter symbol. When one or more wild symbols works as a substitute, the highest win is paid. During free spins, entire reels become wild.

The scatter symbol is the Lucky Rabbit’s Loot logo, which pays no matter where it is located and are multiplied by your total wager. What’s more is that when you get three or more scatter symbols on the same spin, you are awarded eight free spins. You can also retrigger free spins, which is nice, though there is no multiplier during them to increase your wins.

Lucky Rabbit’s Loot is really a one-of-a-kind video slot game. It has all the expected features that players have come to enjoy, including free spins, wild and scatter symbols, and so forth. It would have been nice to have a bonus game, but everyone should try this slot at least once to see a new artistic take on what had become a very predictable type of game.