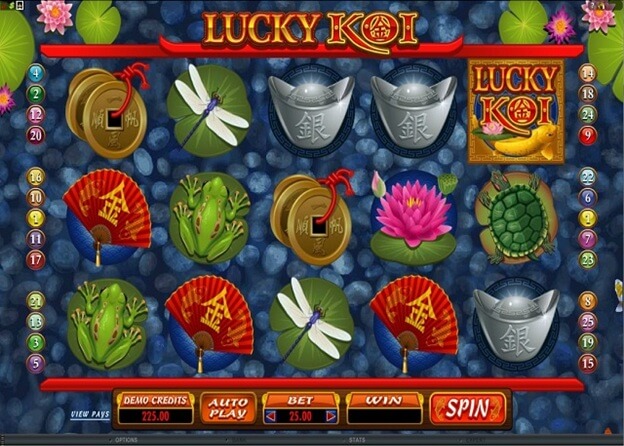 Powered by Microgaming, Lucky Koi is a slot game that features an Oriental theme, with symbols that in the Oriental countries are considered to bring luck to people. In this game, the lucky symbols can bring luck to players, as the player can win prizes making combinations of symbols of the same. The symbols in this game contain the lucky koi itself, Oriental garden, colored fishes, gold bullion, silver bullion, gold coins, fan and lotus flower.

The winning combinations are formed by a number of symbols of the same that appear on consecutive order on the reels, from left to right. The only combination that pays regardless the position of the symbols on the reels is the one made of scatter symbols.

In this game, the Lucky Koi is used as a wild symbol, thus able to substitute for all the symbols in the game, except for the scatter symbol. The wild symbol also pays when it appears from left to right on adjacent reels and it is only needed of at least two wild symbols on adjacent reels in order to pay.

The Oriental Garden symbol is used as the scatter symbol and if three or more symbols appear in any position on the reels, they payout a prize and also trigger the bonus choice.

In the Lucky Koi slot game, the bet size influences the win amount. For the maximum stake, the player has the chance to win the jackpot of 2500 credits if five scatter symbols appear. The second highest jackpot in the game is of 1000 credits and it is awarded when five wild symbols appear on the reels. The same jackpot of 1000 credits is also awarded when five colored fishes appear on the reels.