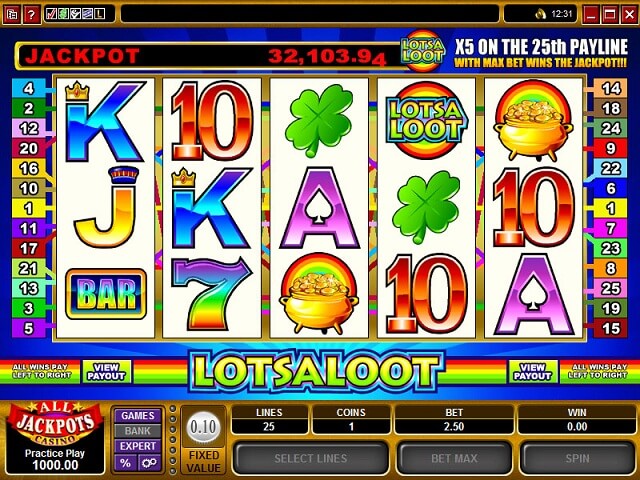 Lots a Loot is a classic slot game that packs a lot of fun into both its 3-reel and 5-reel versions and also gives players the chance to win a nice progressive jackpot, at the same time. For fans of classic slot games in Canada and around the world, Lots a Loot has been a popular choice for years now.

Those interested in vying for Lots a Loot’s progressive jackpot can play this video slot at Microgaming casinos such as 777 Dragon Casino, River Belle Casino, Platinum Play Casino, and many others.

Lots a Loot’s 3-reel version has 5 paylines running across and diagonally. It features classic slot game symbols such as the 1-bar, 2-bar, and 3-bar symbols, the 7 symbol, and the Lots a Loot logo, as well.

Meanwhile, the 5-reel version has 25 paylines and also emphasizes classic symbols, including the trusty 10, J, Q, K, and A, as well as a bar symbol, a 7 symbol, a pot of gold, and a four leaf clover. In both games, colorful rainbows and an array of colors, along with fun, classic sound effects (which can be disabled for those who prefer a quieter approach) complete the experience.

The Lots a Loot progressive jackpot won’t make you a millionaire, but will definitely make your day with average payouts of about $16,000. The jackpot resets at $2,500 and is won on average a couple of times per day, so you have a better chance of winning it than with some of the larger progressives out there. Even so, the biggest jackpot ever won was well over $100,000, so sometimes this one does swell up nicely.

Lots a Loot has just one special symbol, which is the wild symbol. In both games, the Lots a Loot logo serves as the wild, and is not only the key to winning the biggest jackpots in the game (including the progressive pot), but also is able to substitute for other symbols in winning combinations (and it gives a multiplier when it does so of 2x-4x, which is a nice bonus).

Many people prefer a more basic, classic-style slot game when they want to relax and try their luck. For them, Lots a Loot is a great choice, and the progressive jackpot makes this an easy game to recommend for not just old school slot enthusiasts, but everyone who wants the chance to win some money in a hurry. Lots a Loot is an easy to play and fun slot game that anyone would enjoy.