That’s right, the Walking Dead hit TV series has come to life in a new slot. Everyone can jump with glee as the worlds favourite TV series has now made it onto the casino slot game circuit. AMC, the TV channel who created this amazing series are behind this new slot creation too, this means you can be sure that you will be getting the true Walking Dead vibe from the new slot.

For those that do not know, the Walking Dead is a series where the world has been turned upside down with Zombies plaguing the United States and only a few pockets of survivors around. These survivors are not only battling the Zombies, but also battling each other for provisions and safe places to live. The series is in its fourth season and has grown to have a cult following, the TV series was actually born off the back of a brilliant comic book series. 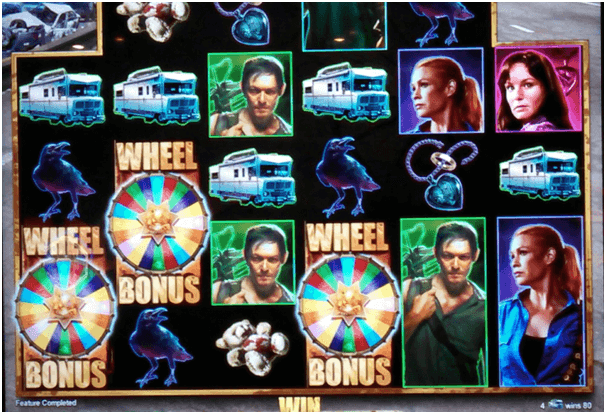 The Walking Dead slot has been especially designed by none other than Aristocrat, the well known Australian slot developer. It is a penny slot, with a massive jackpot of 500,000 dollars. The game features two different wheels, an Atlanta wheel, and a CDC wheel. The Atlanta wheel is present because the television show was shot in Atlanta. CDC stands for Center for Disease Control. It is a fun machine and has nothing more than some life-like two and three dimensional figures to make it more interesting.

Bonus and the Jackpot in the game

When you play with 75 credits, you are eligible to access all the different features available in the game. The maximum bet is worth three dollars, which gives you a shot at the 500,000 dollar jackpot. The graphics involving the wheel spin are also incredible. The wheel spins vertically rather than in a traditional horizontal manner, and the different portions on the wheel are highlighted by various snippets out of the TV saga.

In the Center for Disease Control wheel, players can access three spins, where they have multiple ways to get some winnings. There are various multipliers ranging from two to ten, which grant you exponential earnings on your bet value. In the CDC wheel spin, you also have a chance of arriving at a grenade round.

The grenades are in fact good for those at the machine, because when they blow up, they unlock different bonus prizes. The multiple credit prizes and the innovative ways of winning all add to the fun factor of the game, and its overall appeal to slots players. The experience becomes much more exciting when you add the different show scenes where zombies are protecting the wheels.

In the game you can enjoy various different video clips from the show, as the game is basically themed around the stars of the show, and has a high chance of players winning.

With weapons as symbols and zombies too, you are sure to love the graphics. When you get three crossbows, Daryl’s favourite weapon, you will see Daryl come to life on the screen to help your quest for loads of money.

Anyone who knows of the Walking Dead and loves slots will certainly be making their way over to the slot floor trying to find this gem.

The big jackpot on this game can reach a whopping $500,000 so if your having a really lucky day there is the potential for you to not only have a great game, but also win a life changing sum of money too.