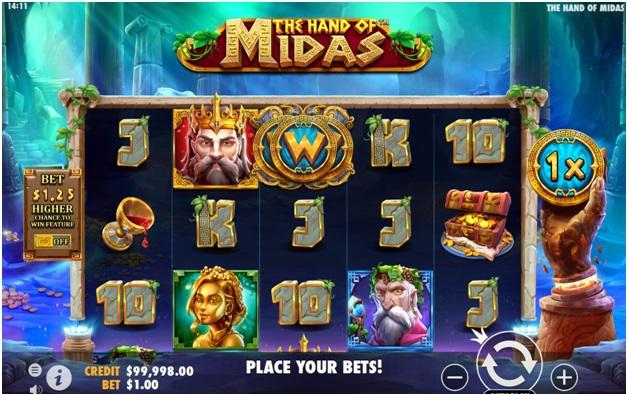 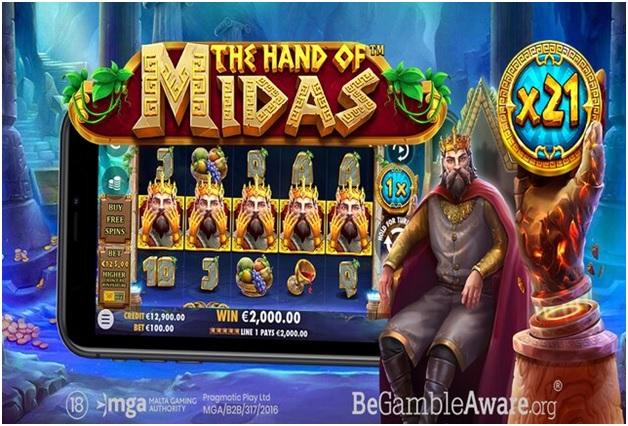 Pragmatic Play launched a new slot game called The Hand of Midas on February 12th, 2021. This new slot game is now available at online casinos to play and win. You can play for free or play with real CAD that’s your choice. This slot version will not disappoint fans with its stunning visual design and plenty of game bonuses, making the experience even better than before.

About The Hand of Midas Slot

The game theme revolves around Midas, the man with the power to turn anything he touched into gold. Though this story is said that it backfired Midas and since he couldn’t switch the ability off and he quickly ended up in despair since food or drink would instantly solidify if it so much as touched his lips and he died of starvation. Others say Dionysus advised Midas to wash in the Pactolus River to cleanse away the gift, or curse. One wonders how many objects he quickly transformed into gold and stashed away before bathing. In this Midas-themed slot game you can see how many wins will you earn by his touch curse.

At the slot screen, you will notice that there is an ancient temple with vine leaves decorating the reel’s frame and logo complete the Ancient Greek feel, as does the mystical music.

Here you deal with the mysterious Greek character of Midas and try to steal his treasures. There are numerous bonuses from which players can benefit leading them to huge winnings.

If one stumbles upon The King Midas symbol this will grant them from two to twenty times their original wager. Then there is the Free Spins mode which is activated if the player rolls three Scatter symbols on the reel, this grants them a randomly generated number of free of cost spins. Additionally, free spins can also be granted by Midas himself but that depends on his mood.

The Hand of Midas is a 5-reel, 20-payline slot The base bets are available from 20 p/c to $100, rising by 25% if you activate the Ante Bet feature. Doing so adds more scatters to the reels, doubling the chance of them triggering free spins.

The winning combinations are formed of three or more matching symbols landing from the first reel onwards. There are a lot of them too, 12 to be exact, split right down the middle into six low pay 10-A symbols and six high pays. Premium symbols are made up of goblets, fruit bowls, treasure chests, Midas’ daughter in solid gold form, Dionysus and Midas. Landing combinations of five premiums on a line is worth a payment from 5 to 20 times your stake. 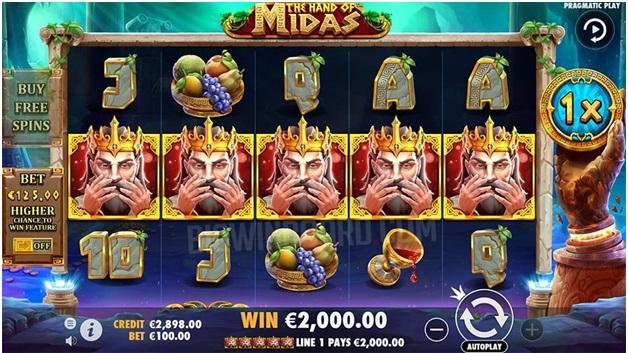 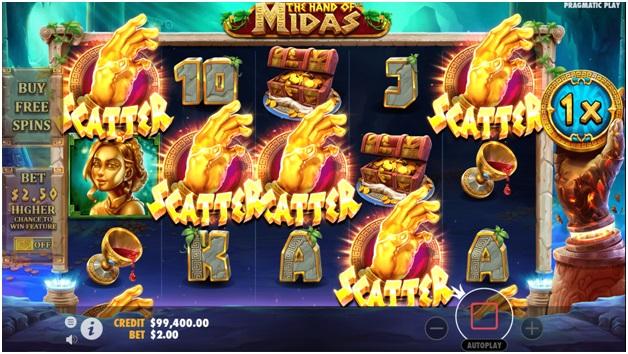 A proven KO combo is sticky wilds plus multipliers, and The Hand of Midas has both more or less in both phases of the game. The base game isn’t quite so impressive, but still, when wild symbols land they add a random multiplier of 1x, 2x, or 3x to the total win. Players can look to the right of the reels where the current active multiplier is displayed. Wilds land on reels 2, 3 or 4, replacing any pay symbol, while multipliers are added together when there is more than one on-screen at once.

Hitting 3 or more of the slightly creepy-looking hand scatter symbols triggers free spins. Before the round starts, the reels are cleared of symbols, and special mini-slots appear on the reels which held triggering scatters. Each mini slot spins to award 1, 2 or 3 spins each. The total is then carried into the bonus round and cannot be retriggered – by scatters at least. 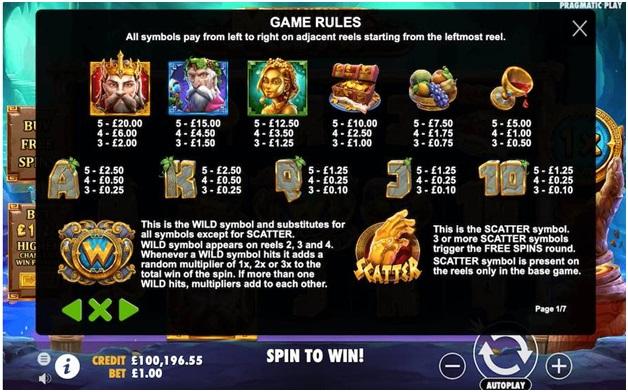 During free spins, when wilds hit they add to the win multiplier as in the base game, but with two critical changes. One, wilds become sticky, thus remaining in position for the rest of the feature. Two, the win multiplier does not reset between spins; it can only stay the same or rise.

Whether this sounds warning bells in your mind or not, free spins also come with a minimum win guarantee. The amount is based on the number of triggering scatters so 3, 4 or 5 scatters attract a minimum win value of 10x, 20x or 30x the total bet. If the bonus round ends without breaching the minimum amount, free spins are retriggered.

Players are able to buy free spins from the base game. There are three options – 100x, 200x or 300x the total bet triggers free spins with 3, 4 or 5 scatter symbols.

Even potential at 5,000x the base bet is both a decent, not to mention realistic, figure for Pragmatic Play to boast. To get technical, this figure is a win cap, so if the amount is hit during free spins, any remaining spins are forfeit and the round ends. Play this game at online casinos for free or with real money.