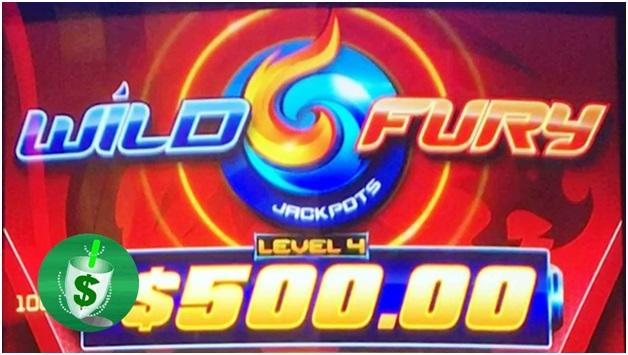 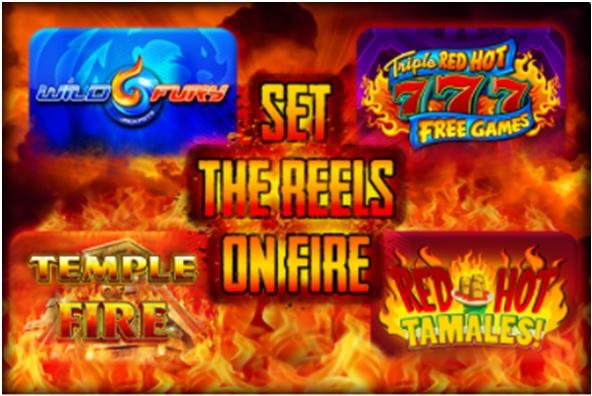 There is great significance of fire in many cultures. Fire is worshipped in many religions. It is used in cremations and bonfires, candles; eternal flames are used to remind of notable occasions, and the Olympic Flame burns for the duration of the games. The Holy Fire in the Church of the Holy Sepulchre in Jerusalem has been consecutively documented since 1106 AD.

In many countries Fire is symbolic of destruction as in Japanese mythology, Kagu-tsuchi is the god of destructive fire.

Many gaming companies develop Fire themed slots and symbols to portray fire that plays a significant role in your lives right from cooking food to religious ceremonies and in bringing fortunes. 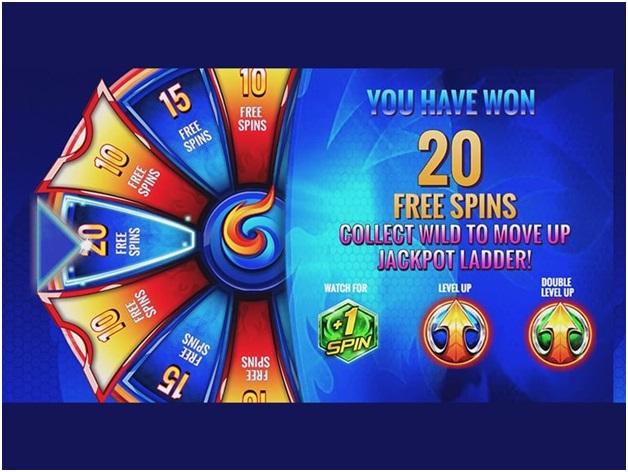 Wild Fury is a Jackpot fire slots in Canada powered by IGT brand.  Playable from just 0.10 per spin, this is medium volatility slot machine has five reels, ten paylines, and special features that include stacked wild symbols, plus those free spins with a guaranteed jackpot win!

Popular game symbols such as playing card suits, number 7’s, and dragons are prominent in this slot game. A bright blue honeycomb background image is an eye-catching sight and you can play this slot even on your mobile. The vividly-colored symbols are just as attention-grabbing, with a slight 3D effect to the precious jewels that pay out the smaller prizes.

Standard symbols need to land on at least three reels from the left across a payline, helped out if needed by the wild symbol that can substitute for others.

Diamonds and jeweled playing card suits each pay out five, ten, or 30 times the amount staked on each payline when stopping on three, four, or all five reels. Blue and golden dragons are valued at up to 60x and similar-colored 7’s pay up to 100x you per line stake. Look out for the wild symbol though, as it’s a special icon in a number of ways in this slot machine.

As well as acting as other symbols, a wild symbol flaming ball of energy pays 40x, 125x, or 500x the line stake depending on how much of a payline it fills. It will also be stacked several high on any reel, which makes it much easier to complete extra combinations for you.

The trigger for the free spins round is the flame sticking out of a blue circle. When you land this symbol in any three places on reels two, three, and four, you trigger the spin of a wheel awards 10, 15, or 20 initial free spins. A golden dragon swoops across the game as this wheel spins up the number of bonus spins, adding excitement to the feature.

The size of the jackpot claimed at the end of the free spins bonus round depends on how many wild symbols are accumulated. Even if you get none you still win a jackpot that starts at 80x the stake at the end. If you get between 20 and 39 wilds, the jackpot will start at 125x the stake and between 40 and 64 wilds will see a prize of at least 200x paid at the end. Collect 65 to 99 wild symbols during the free spins to win 500x the triggering bet or more, and the top jackpot that starts at 2,000x is yours if you collect over 100 wild symbols. As well as all these extra wilds, special single and double Level Up symbols can appear at random, boosting your jackpot levels even further. 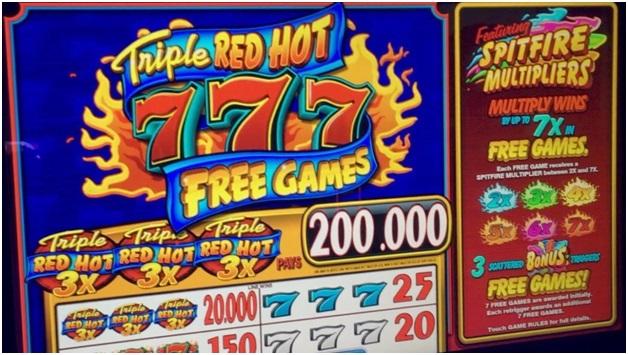 Red Hot Triple Red 7’s are the top prize in both the main game and the free spins, and you can win up to 150x your line-bet for hitting three of them

Triple Red Hot is a 3-reel classic fire slots in Canada from IGT. The  Triple Red Hot 777 offers Free Spins, 3x Wild Multipliers, Total-bet and awarding Bonus Symbols, and Spitfire Multipliers which can multiply prizes won in free spins by up to 7x.

In this slot you only have to line-up 3 symbols to win the top prize for each symbol. Also there are even prizes for some two symbol lines in Triple Red Hot 777 Free Spins.

You can even respectively win 10 coins and 2 coins for hitting just 1 or 2 Red Hot Triple 7’s.

Bonus Symbols are even more exciting than wilds as 3 of these will instantly award you 1x your total-bet, and then also award you a free spins bonus. You’ll start off with 7 free spins, but you can retrigger up to an amazing 700 free spins in any one bonus. Each Free Spin will also be accompanied by one of the Spitfire Multipliers, as they can multiply prizes up to 7x. 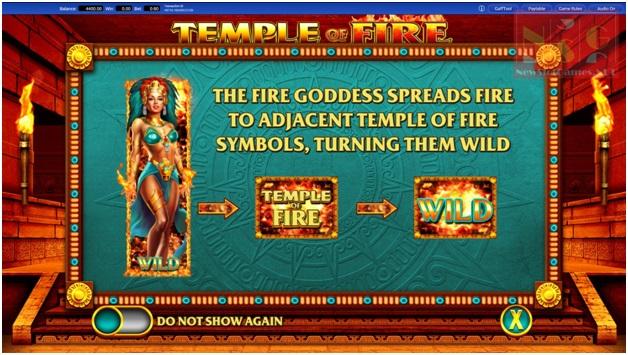 In the Temple of Fire slot machine, any combination of the Goddess and the standard wild symbol will count as a win.

Temple of Fire is an IGT fire slots in Canada with  a five-reel, four-row, 30-line game.  The Temple of Fire online slot is an attractive example of games themed around the ancient Aztecs. In this slot the Goddess is a striking figure, wearing a revealing blue outfit and wearing an elaborate gold and ceremonial feather headdress.

In the Temple of Fire slot machine, any combination of the Goddess and the standard wild symbol will count as a win. The Goddess is a stacked wild which fills whole reels when landing on the top row, and her powers don’t end there. The game logo symbol also appears stacked, and if any are adjacent to the Goddess, she blasts fire at them, turning them into extra wilds. This can often lead to multiple winning combinations at once, although it’s not actually guaranteed that any wild feature of the Temple of Fire slot machine will create a win.

Wilds can’t stand-in for the Bonus symbol. This image of the temple in any three places on reels one, three, and five, will launch a free games feature. You have three different options to pick from, with 12 free spins where wins pay out at the basic rate, six bonus games with prizes doubled, or just four spins, but any wins are multiplied by 3x.

Whichever option you choose, in each free spin, one random reel stacks with wilds. More bonus symbols retrigger the feature with the same selection applying for the subsequent games. The highest possible payout of 450x is available when you go for the spins with the 3x multiplier.

Flames surround some of the symbols, including the high-paying ‘7’s’ and the wild icon.

Red Hot Tamales is Mexican themed fire slots in Canada from IGT where you can win up to 5,000 coins. In this slot game a fiery wild symbol helps you to create scorching payouts. This is a basic game, where the action is fast and furious as you simply aim to line matching symbols across any of the 27 paylines of the Red Hot Tamales slot machine.

When you load the game you will find a cute, cartoonish cactus that stands above the reels of the Red Hot Tamales. He’s dressed in a sombrero hat and waiters’ apron, waving a signature dish of tamales, surrounded by animated flames.

More tasty-looking tamales sit to the side of the game, burning away as the reels spin. The Mexican theme of the Red Hot Tamales slots game extends to some of the smaller details. A traditional Hispanic-type pattern divides each of the three reels, and a lively Mariachi-style tune accompanies the action of the Red Hot Tamales online slot.

Flames surround some of the symbols, including the high-paying ‘7’s’ and the wild icon.

The Red Hot Tamales slot machine uses single, double, and triple BAR symbols. Any combination of BAR icons pays out six times your line bet. Singles are worth 16x, doubles pay 20x, and a win of 24x the line bet is yours when the triple BAR symbol crosses the reels.

Higher prizes come from landing ‘7’ symbols across the Red Hot Tamales slots game reels. You can also win a small prize when a mixed set of symbols crosses the reels, with any 7’s worth ten times the line bet.

Green, yellow, and red 7’s pay 30x, 60x, and 100x the line bet, respectively. The gameplay of the Red Hot Tamales online slot gets hotter when the flaming wild symbol appears. It’s valued at 200x your line stake, and does the usual wild trick of acting as other symbols if needed to complete a winning sequence.

There is a ‘Blackout’ feature, and the top prizes come from filling all nine of the reel positions with a single type of symbol. The yellow 7 filling the whole of the Red Hot Tamales slots game will see a huge 1,000x your line bet paid out. But the red 7 is worth a massive 5,000x when filling the reels.

You can play these four New Fire Slots in Canada at Canadian online casinos like Play Now for free or real money.