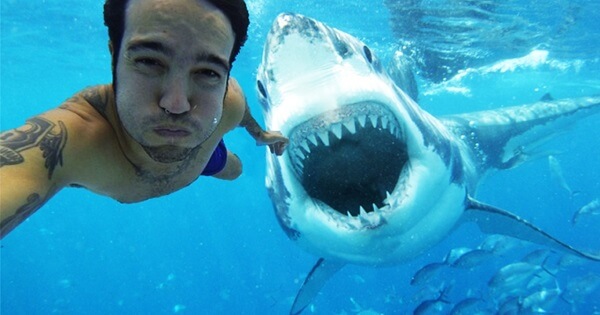 Throughout history we have found that the biggest threat to human existence is our own ego. Technology has not changed this, in fact it’s highlighting the sad reality that often times we are not able to be saved from our own stupidity. This has been showcased by the fact that so far in in 2015 more people have died in selfie related accidents than from sharks. This shocking new trend has inspired a new campaign in Russia to prevent selfie related deaths. It has even been thoroughly examined in a new study that gave grim results about the current devolving of humanity.

With 12 selfie related deaths & hundreds of injuries so far in 2015 we have truly outdone ourselves. This year people have died by accidentally shooting themselves while posing with guns, crashing their cars, falling off of cliffs, getting ran over by trains and getting tangled in power lines, all while trying to catch the perfect selfie of themselves doing it. It goes to show that as we get accustomed to technology being able to think for us we are gradually devolving into a whole new level of stupidity that was previously thought to be impossible. With all the knowledge of the internet at the touch of a button we are gradually turning off our critical thought process to an extent that we are rivaling the thinking power of someone in a coma.

The selfie crisis acquired national media attention in Russia when two men posed with a live hand grenade after pulling the pin in the Ural Mountains. The good news is they successfully captured the perfect selfie, the bad news was both of them were blown to pieces. Ironically the cellphone survived as a testament of how low we have sunk. This sparked a national media campaign in Russia to curb the amount of injuries and deaths linked to selfies. The question is, can this campaign save people who have already proved that they are immune to education?

A new study by the Ohio State University offered to shed some light on the dramatic rise of selfie related deaths & injuries. They reported that there was a direct link between men who take a lot of selfies and narcissism/psychopathy. This gives avid selfie takers the ends justify the means attitude that raises the risk of them taking a dangerous selfie.

“It’s all about me. It’s putting me in the frame. I’m getting attention and when I post that to social media, I’m getting the confirmation that I need from other people that I’m awesome,” lead researcher Jesse Fox said. “You don’t care about the tourist attraction you’re destroying; you don’t care about annoying people in your social media feed … you’re not even thinking about the consequences of your actions, so who cares if you’re dangling off the side of the Eiffel Tower?”

Unfortunately women are not immune to this. A 32 year old woman in North Carolina died in a head on collision while posting a selfie of her driving on the freeway onto Facebook. She even managed to change her status to “Happy” before she was completely obliterated by an oncoming dump truck. We have to pray that the deaths of these incredibly dumb people will help educate others to not follow their lead. But with our current obsession with ourselves it almost seems that these warnings are falling on deaf ears.