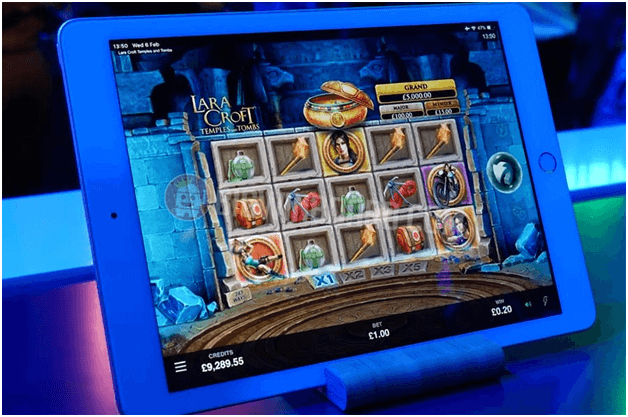 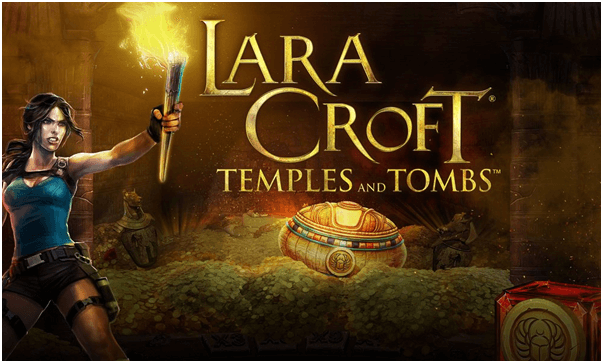 The new slot game from Microgaming Lara Croft Temples and Tombs is now available at Canadian online casinos to play instantly with your cell phone, PC or Tablet without any download. Microgaming in partnership with independent studio Triple Edge Studios developed this wonderful slot game. The aim of the new slots game is finding the ultimate Egyptian treasure. The new game is 5 reels and 243 Ways to Win chock-full of royal treasure adventures and a multitude of opportunities to strike it rich

Lara is the main heroine in this slot game and needs all the help that she can get trying to navigate the sands of time and hopefully get her hands on a truly legendary fortune. You can play this game online at any Canadian Microgaming powered online casino with real CAD to win real or for free as play for fun game.

Symbols and bets at Lara Croft Temples and Tombs 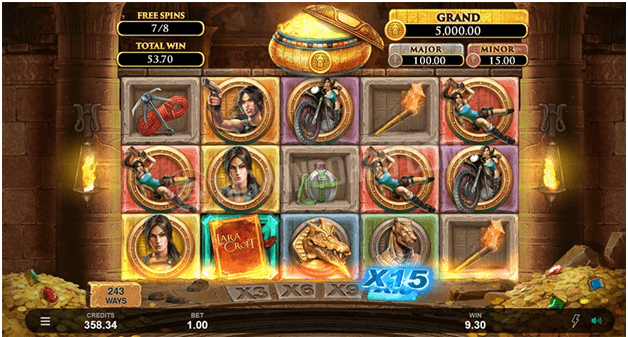 Symbols include some of Lara’s kit, such as a water bottle, rope, and grappling hook and a medical bag.  Higher-paying symbols include statues of Egyptian Gods, and then you will find four images of Lara herself. The Lara Croft: Temples and Tombs online slot puts her on a motorbike, jumping into another adventure, and firing a gun. The top symbol is simply Lara looking out from the reels, and this is worth ten times the total stake when seen across all five reels.

The scarab beetle makes its almost inevitable appearance in the Egyptian setting of the Lara Croft: Temples and Tombs slots game. This golden icon is a wild symbol that acts as others if needed to bridge gaps in a run, although it only appears on the middle three reels. 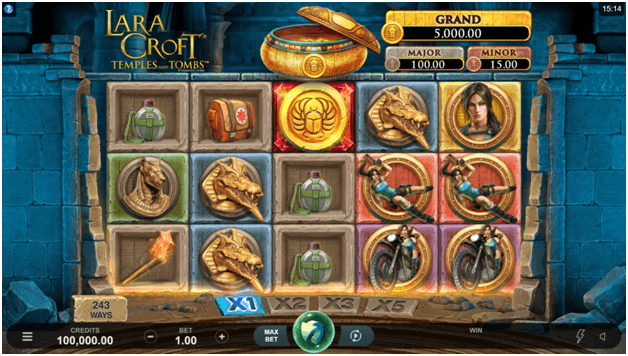 There are some outstanding features in Lara Croft Temples and Tombs slot game. The main feature is Rolling Reels feature. Those who are familiar with the feature will know that as new combinations of winning symbols tally up and fall away, those spaces are filled with new symbols. It’s a new way of spinning a way for a first-class win and its exclusive to Microgaming. To have consecutive wins which can be awarded with accumulating trains of multipliers, up to a maximum value of x5 the bet. This all happens in the base game.

The another best feature is Behold the Magic Scarab which if you are lucky enough to gather unto that will eventually have the opportunity to befriend the golden scarab jackpot, which is of course the key to the ultimate prize: the ancient tomb that holds in its belly at least 8 free spins. 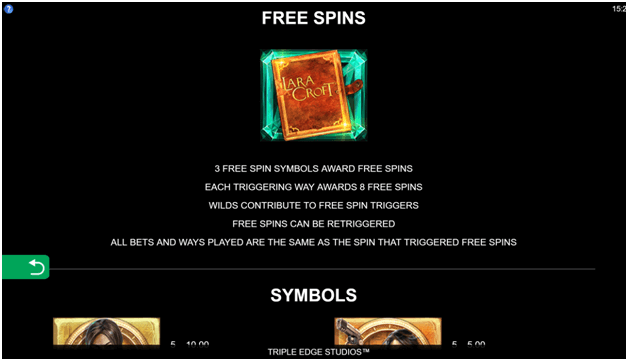 A ‘Lara Croft’ book opens up a free spins round when it lands in three or more places at once. The game awards eight spins for each winning way in the triggering spin. This can lead to a maximum of 80 free spins, and higher multipliers will be active throughout the round.  The multiplier blocks will now show an initial 3x on any win. Any more wins in a Rolling Reels round will be boosted by 6x, 9x and then a huge 15x. You can even retrigger the free games by landing more book symbols, with any new spins added on to the end of the current round.

The Jackpot to win 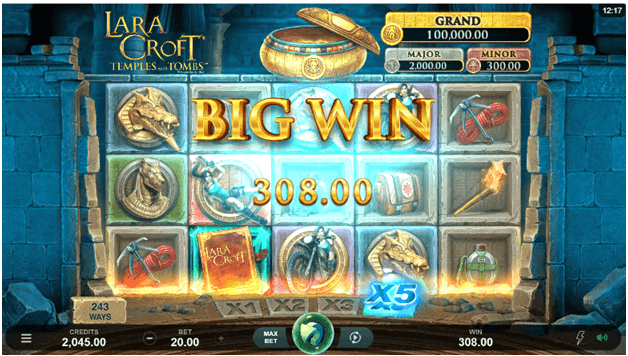 A golden bowl sits above the reels, next to panels displaying the Minor, Major, and Grand jackpots. You will see 1x, 2x, 3x and 5x multiplier values below the reels, hinting at the rising rewards that come with each Rolling Reel in a sequence. Once the Rolling Reels have stopped, you could win the Mini, Minor or Major jackpots. These are not progressive jackpots but are worth 15x, 100x, and 5,000x the total stake, respectively.

Where to play online?

You can play Lara Croft Temples and Tombs at Canadian online casinos with real CAD in real time Or choose to play for fun without spending any money. This slot game is currently available at almost all of the reputed online Canadian casinos.