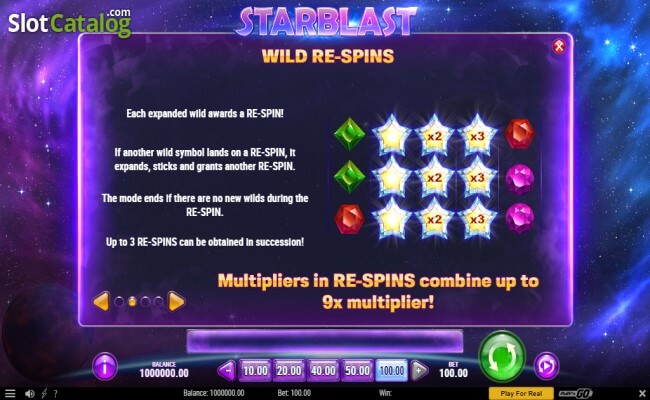 Set to release on March 20, 2019, it is quite obvious that Starblast is to compete with and it is the answer to NetEnt’s iconic smash hit Starburst. Starburst was released in 2012 and became one of the most played online slots on the market and it remained for players free on many casinos.

In the background, you find interstellar clouds of dust or Nebulae. It is also featuring a Moon Princess-type narrative, calling out “Double Re-Spin” and other highlights in the game. On the reels, 5 types of gemstones of various color can be found. You’ll also get to see lucky 7’s and bar symbols. The wild is symbolized by a star which can appear as a 1x, 2x, and 3x multiplier wild.

Starblast is an easy game which rotates around the wilds which appear in the three middle reels only. On appearing three wilds, it expands to fully cover the reel and a Re-Spin is awarded while the wild reel remains locked in place.

On hitting the second wild it will again expand and another Re-Spin is played with two wilds locked in position. Over all, you will have 3 fully stacked wilds with multipliers of up to 9x. It all can result in winning up to 4000 times your stake. 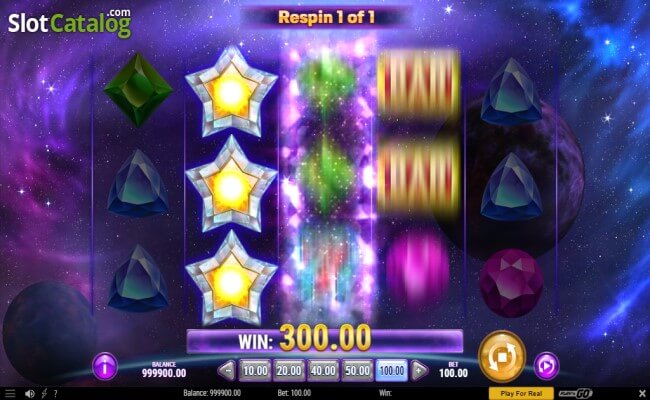 It can be said that Play’n GO has launched a blatant copy of Starburst, the name also almost similar. It is questionable even if the industry has a long history of “borrowing” from each other. When compared to Starburst, Starblast is by far a better game. Visually, the original has the upper hand but the Starblast has higher win potential that makes it a lot more appealing to play.