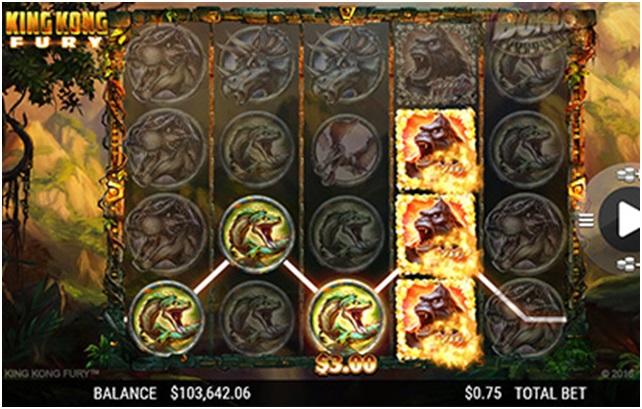 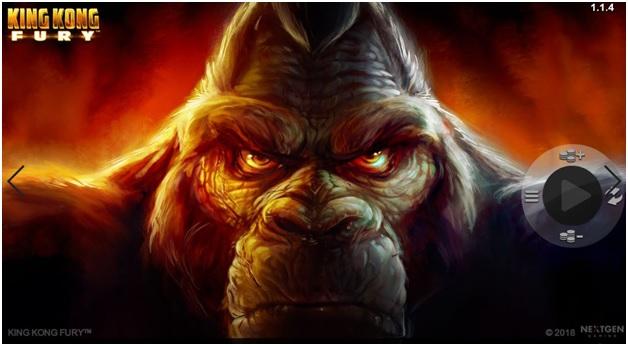 King Kong is a film monster, resembling an enormous gorilla-like ape, that has appeared in various media since 1933. He has been dubbed The Eighth Wonder of the World, a phrase commonly used within the films. The character first appeared in the novelization of the 1933 film King Kong from RKO Pictures. The character of King Kong has become one of the world’s most famous movie icons, having inspired a number of sequels, remakes, spin-offs, imitators, parodies, cartoons, books, comics, video games, theme park rides, and a stage play. His role in the different narratives varies, ranging from a rampaging monster to a tragic antihero.

Here you meet King Kong in a slot game which is now online in Canada to spin and win. 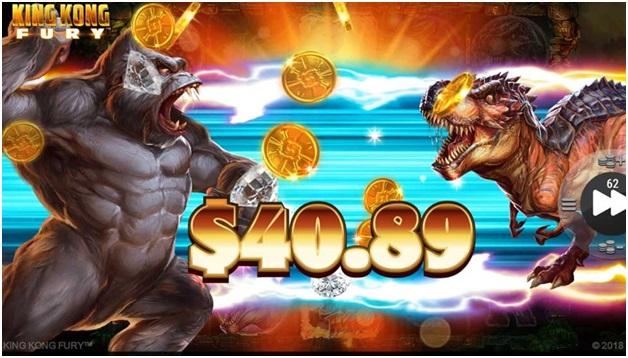 This slot can be played for free or with real money. Based on the famous movie monster of all, having first appeared in the classic 1933 film as said above, then re-invented in the best-forgotten 1976 reboot, before being brought back to life in Peter ‘Lord of the Rings’ Jacksons’ 2005 adventure, this slot is widely played at online casinos. 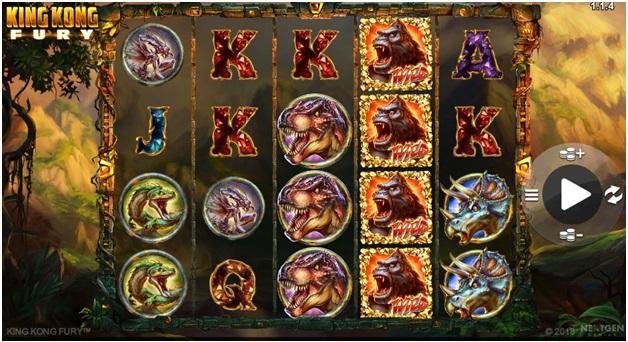 The mysterious landscape of the island sits behind the 5 reels, each of which is 4 symbols high and which are crossed by 50 paylines.

All of the action in this game takes place on Skull Island, where dinosaurs rule and where exotic bonus features such as Raging Re-spins, and Lightning Reels award extra symbols for some big wins, while Kong’s Call brings up to 12 extra wild symbols into play. The mysterious landscape of the island sits behind the 5 reels, each of which is 4 symbols high and which are crossed by 50 paylines. Wins are paid out when 3 or more of the same symbol come to a rest across a payline, running from the left side without a break in the sequence, although a special King Kong wild symbol can help out if needed.

If you can navigate through to the paytable, which isn’t as easy as it sounds, but clicking the ‘i’ button works, then you will see what each combination of symbols will be worth. High card symbols, in a colourful, slightly sparkly style, will return the low value wins, starting with the 9 and 10 that each return 4x, 7x, or 10x the line stake when they land across a payline on 3, 4, or 5 reels. The J and Q symbols will each be worth up to 15x and the K or A up to a maximum of 20x.

Dinosaurs fill out the top half of the paytable, starting with some made-up creature that pays between 7x and 30x the line bet, then we move up through a flying monster, giant snake and Triceratops until we get to the T-Rex, which is worth 10x, 20x, or 250x the line stake when it stomps onto 3, 4, or 5 reels of an active line.

King Kong himself is the wild symbol and while he only appears on the middle 3 reels, and therefore isn’t able to make up a winning line on his own, this headshot of a big, angry ape will be able to act as all other symbols, apart from the bonus icon. He will be able to complete winning lines, either bridging gaps in a continuous run, or extending a win of 3 symbols across to reel 4 for a bigger reward.

Bonus Rounds in the Game

Anne Darrow is the bonus symbol that pays 100 coins when she’s seen on reels 1 and 5 at the same time, while also triggering a free spins bonus game.

There are a couple of in-game features that can lead to higher payouts, starting with the Lightning Reel bonus which removes the playing card symbols and replaces them with the high-value beasts. With fewer symbols on the reels, it’s easier for them to create a winning combo, and of course, any subsequent payouts can be worth more. Kong’s Call is another random feature that sees extra wild symbols added to the 3 middle reels and once all wilds have been revealed, new winning combinations can be created. It’s possible for the Lightning Reel and Kong’s Call to be triggered in the same spin, which should lead to some huge rewards.

Anne Darrow is the bonus symbol that pays 100 coins when she’s seen on reels 1 and 5 at the same time, while also triggering a free spins bonus game. Before these begin however, with players seeing 2 statue reels displaying numbers from 3 to 10. These are then multiplied together to give you the number of free games, which can range from just 3 x 3, which equates to 9 extra games, right up to 10 x 10, for the best outcome of 100 free spins.

If a full stack of 4 wild symbols fills any reel during these bonus spins, an additional reel re-spin is awarded, during which the wild reel is held in place to give punters the best odds of landing a win-line. There’s no upper limit to how many times this can occur, so if another stacked wild reel appears in the re-spin, the process continues. The in-game features can still occur during the free spins, and the bonus games can be retriggered if Ann Darrow turns up on reels 1 and 5 in any spin.

You can play King Kong Fury slot game on your PC or mobile.

Join any friendly online casino or visit any Canadian lottery website like AlC or OLG to play this game.

Once the game loads on your screen the minimum stake is just 0.25 per spin, and wins go up in value as the stakes are raised and with a high limit of 500.00 per spin, and for you to claim some massive rewards.