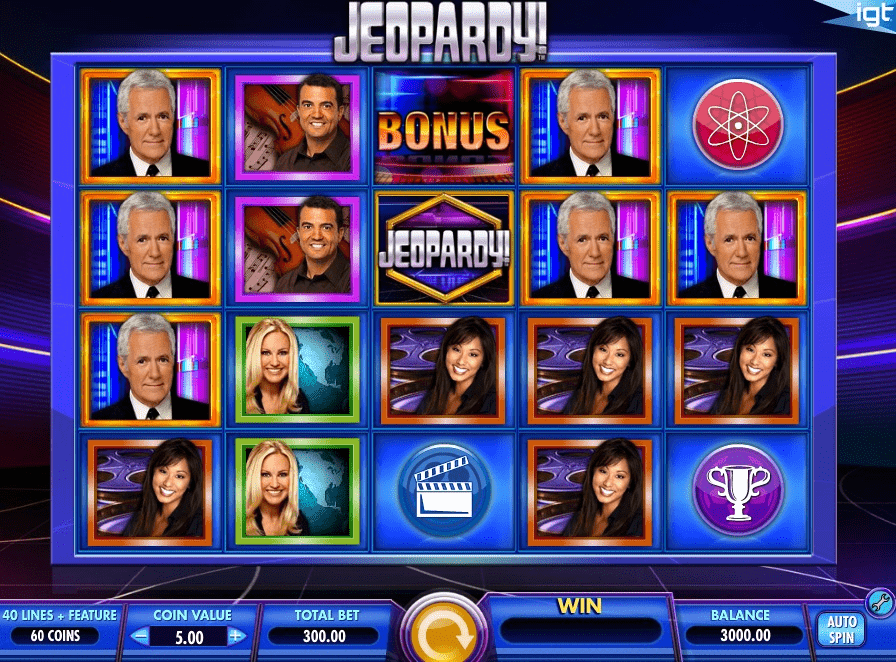 Since the inception of online games most of the gaming developers have produced many games based on movies and TV shows. Slots game developers like Microgaming, Betsoft, Marvel, Playtech and many others have brought many in wonderful slots games to online casinos around the globe.  Many of these slots games are themed after original concepts, though there are a few fair that are inspired by well known films, superheroes, stories and other parts of cultural life. There are quite a number of slots that are based on hit TV shows, ranging from fun gameshows and hilarious comedies, to entertaining talent shows, thrilling dramas and many more. 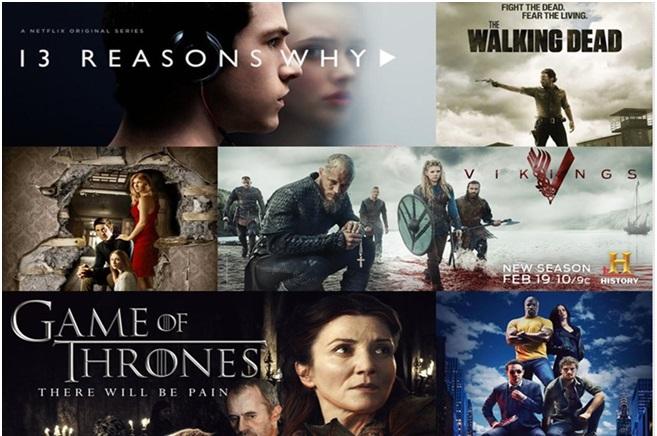 These slots machines are now popular among players and often looked forward by every type of player be it of low stake of high stake or medium player or even a new player. That’s because these slots based on popular TV game shows offer big bonuses, Jackpot prizes and other cash prizes as one does when watching these TV game shows and have the same element of gambling for a mega win.

1. Who Wants To Be A Millionaire 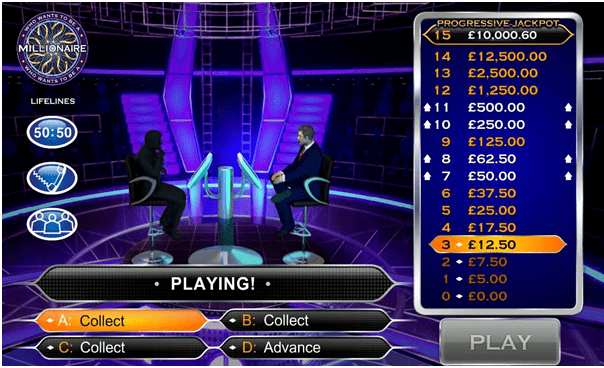 Who wants to be a millionaire slot

Who Wants to be a Millionaire? is one of the most popular TV shows of recent times, not only in the US, but also globally. As a matter of fact, the TV show was so popular that it inspired a huge resurgence in the popularity of game shows, worldwide. Due to the show’s popularity, Ash Gaming crafted this real money slots game of the same name and same theme to honor the show’s fame.

The game features 5 reels and 50 paylines. It also has scatters, wilds, free spins, and a progressive jackpot. You can play this game at online casinos with your PC or smartphone.

This online slots game features a variety of symbols related to the show including the Black Chair, the 50:50 Logo, Phone a Friend, a $1 Million Check, a Question Mark, a Pound Sign, Ask the Audience, and the Show Logo. The wild is represented by the TV Studio symbol, and it substitutes all symbols on the reels except the scatters.

The game also features the familiar blue neon colors and the dramatic musical sounds that draw in the anticipation on the TV show. The reels appear in front of the TV show, further adding to this slots machine’s authenticity.

In total, the slots has three bonus features, along with five reels and 50 paylines. To start with, the progressive jackpot opportunity is activated when you get 3 or more Jackpot Ladder symbols on the reels. You will then be entered into a quiz session where a random answer is chosen for you. If your answer is ‘collect’ then the bonus round will come to an end and your wins are added to your account.  Free Spins bonus mode, is triggered when you land 3, 4, or 5 Free Spins scatters on the reels.  Also Prize Pick Bonus is triggered with 3, 4, or 5 Prize Pick scatter icons landing anywhere on the reels. Pick each of the icons for instant prizes. The more Prize Pick scatters you have triggering the bonus, the higher the prizes.

The betting range runs from as low as 0.01 to as high as 300, thus, catering to a wide variety of bettor preferences. The wild is the highest paying symbol and 5 of them on an active payline pay out 5000X the line bet. There is also the progressive jackpot that goes as high as $1 million. 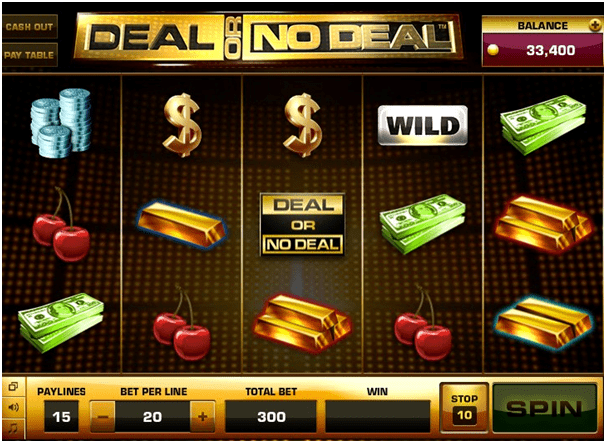 Deal or no deal slot game

This popular slots from Playtech is a 5-reel, 20-payline game and is considered one of the most exciting video slots games. Its popularity comes from the overwhelming success of the TV show that has the same name. The slots game itself provides every player with the opportunity to quickly add a great sum of money to their bank accounts. However, one of the most appealing features Deal or No Deal World has is the three different bonus rounds it offers. In other words, the chances for winning are constantly increasing and you can become the lucky winner at any time.

If you have ever watched the popular TV show, then you should be pretty much acquainted with the rules. There are 26 cases and you have to open all of them, while following the rules of the game. The banker will occasionally call and offer you a particular amount. If you accept the deal, the game is over, if you decline, you have to continue opening cases until you come across an offering that seems fine for you. The chance to win the progressive jackpot is 1 in 26.

This game features three bonus games, flash format, monetary gifts and last but not least, a progressive jackpot. The coin denomination ranges from $0.02 to $10.00. You need to trigger 3, 4 or 5 scatter symbols in order to enter the Reel Banker Bonus Game during which you will get a number of free spins where the prizes will be doubled.

You will also be given the chance to multiply your bet up to 20 times. Deal or No Deal offers every player three jackpots that can be won – the Banker’s Richest Slots Game – Safe 1, Safe 2 and Safe 3. The progressive jackpot is yours if you play all 20 paylines. The amount of the jackpot is determined by the bet per line that activated the bonus. 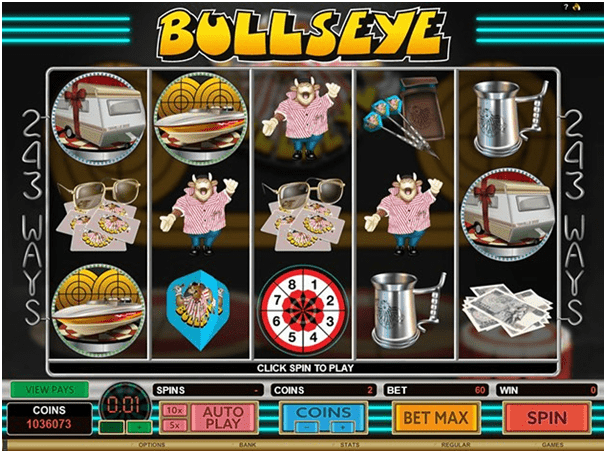 With 243 ways to win this slots from Microgaming is based on what was Jim Bowen’s famous cry on the 1980s TV gameshow of the same name, and Microgaming have tapped into this cult classic with their very own darts orientated slots game.

The developers have managed to incorporate the sense of humour and fun that was ever present on the show. You’ll hear witticisms from the host Jim, commentator and darting aficionado Alan Green and the show’s main character Bully. The show even includes some of the terrible prizes – as they appear now appearing as symbols.

As a result, when you spin the reels you will see caravans, old-fashioned cars (and, of course, the famous speedboat! You will also be able to spin a wealth of items that are inextricably linked to the programme, such as the tankard, the dart flights and the bully soft toy. Each of these pays out at its own rate for matching three, four or five on one of your active paylines, and you can find out exactly how much by consulting the paytable.

The Bullseye Logo is the wild, with Bully’s Special Prize Board as the bonus. Each of these treats players to additional prizes; the main one being the Bullseye Bonus game. This takes place on a second screen and utilises a pick field to enable players to accumulate some decent payouts. The bonus round is based on the famous Prize Board round from the show, where Alan Green would welcome players onto the oche as they threw for the special prizes. 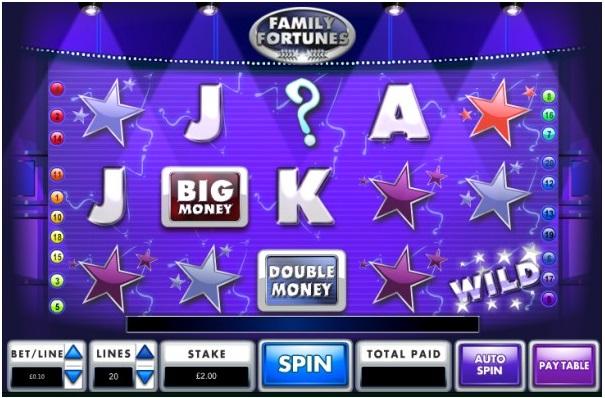 This slots game is mix of TV game with battling families hit in the UK, US and beyond. Fremantle Media have made a fast and entertaining slots based on this, which takes plenty of ideas from the original – and combines this with a modern 5-reel video slots game. There are two separate features, ‘Big Money’ and ‘Double Money’, and with wilds in play you can win multiple prizes during the regular spins too.

You’ll be met with an animated video introduction, and then taken to a bright purple screen which shows the reels under bright studio lights. Brass band sound effects are in play – these are very TV gameshow-like. The symbols are a mix of stars in different colours, and the playing card symbols which are silver. There are also wilds and a question mark. The two of the bonus games are excellent. These take you to different screens. One is a complex free spins game with the duelling families on screen. The other involves you picking answers to questions as happened in the original show.

This is a 20 line video slots, with 5 reels and 3 rows of symbols. The spins are in British Pounds, with 1p per line being the minimum and £20 per line available for anyone with £400 a spin spare to play the full set of lines.  Prizes from regular play are on the smaller side, with the bonus features making up the bigger wins in this game. The best prize comes from the oval Family Fortunes logo, 5 of these on a line wins you 500 coins; you’ll get 150 coins for 4 and 75 for 3. Next in the prize list comes the question mark  where 5 gets you 300 coins,  with the gold and purple stars next  give 150 and 100 respectively. The blue and orange stars and the playing card symbols then make up the smaller wins.

Bonus symbols say either big money, or double money – you need 3 of either type to trigger the respective bonus. Double money is a free spins round with a couple of major differences to those found on other slots. First of all, there is no assigned number of spins. Instead the game is continuous, with the silhouetted families at the bottom of the screen hitting a button in turn after each spin. The screen between them then either says ‘Good Answer’ or shows an orange and black cross. You keep spinning until you hit the 3rd cross. Wins during this bonus are doubled and also work from both directions.

This slots game from IGT is based on the theme of a popular television game show.  It does a very good job of recreating the look and feel of the show, with soundbites from its current presenter Alex Trebek and narrator Johnny Gilbert making it feel like you’re a real-life contestant.

The slots has five reels and nine paylines, with symbols featuring the Jeopardy! logo, as well as some general categories such as science, movies, music and geography. The bonus round features the familiar 30-screen set-up as seen in the show, with players having to click on the screens to reveal the bonus amount hidden behind them.

The bet amount for this game is $1 and the max bet is $5, at five coins per line. The highest payout in the game is a jackpot of 25,000 coins or $25,000, which is offered when you get the Double Jeopardy multiplier five times in a payline.

Jeopardy! has a number of interesting bonus features that reward the player generously. One of them is the Double Jeopardy 2X Wild feature, which replaces all other symbols on the reels and multiplies your winnings by 2. This feature is triggered if you get at least three of the wild symbols. The WILD is also the highest paying symbol on the game.

The bonus symbol in the game is the Jeopardy Bonus, which is also the scatter and cannot be replaced by the WILD. If you get at least three of these bonus symbols on a payline, the multi-line Jeopardy bonus feature is triggered. This feature will take the players to a grid made up of 30 Jeopardy! screens, as seen in the television show. This is more like the game show and the player has to click on the Jeopardy! screens to reveal the bonus amount. Each screen has a reward behind it and the bonus feature comes to an end when the Final Jeopardy symbol is revealed.

Besides these five popular ones there are various other such slots like the 24 slots game, Game of Thrones, Star trek,  and X factor slots or even movie themed slots. You can enjoy these awesome slots at online casinos or at Facebook online games and try to be a lucky winner in this game show.