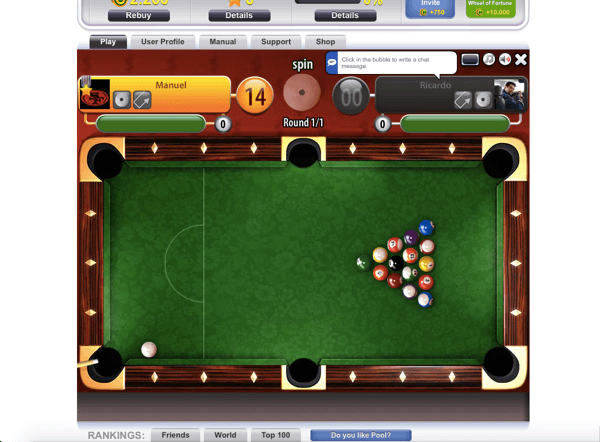 When it comes to flash games on Facebook, few have captivated more players’ attention than Pool Billiard. Before the release of this groundbreaking game, pool was limited to real life plays. However the debut of this game changed all that. Pool Billiard managed to catapult online pool playing into an international phenomenon. With over 1,400,000 page likes, it’s quite clear that this game has taken pool to the next level. Since so many people have been raving about this game for years, we decided to put it to the test. Our experts dove headfirst into this game to be able to provide an epic review. Enjoy the most comprehensive review of Pool Billiard online!

This offer was not appealing.

When you first enter the game, you are offered a 50% off deal to buy an orange pool cue. Since I would never pay money for such a thing I politely declined. Once you get past the offer you are greeted with 2,300 game cash & a long list of opponents. You can choose to challenge anyone or randomly play with the play now button. Since I was feeling lucky I chose the play now option.

Face off against competitors around the world!

I was quickly matched up with a player & it was game on. During the game you have the option to send messages back & forth. This quickly evolved into a heated argument. The pool game devolved into a gross discourse that would make any decent citizen blush. Luckily the game ended before things got too out of hand.

This game was a lot closer.

On my second game, I received a less vulgar opponent. We ended up playing a fiercely close game. I loved the way the game shows you the angle previews on the shots. It makes for a wildly entertaining game. A few minutes later we were neck & neck. I sank in 3 shots in a row, but unfortunately the game was far from over. Just when I thought that victory was immenent, my opponent went bezerk. He managed to land 5 shots in a row, effectively shattering my winning streak. Within a few turns I had once again lost. 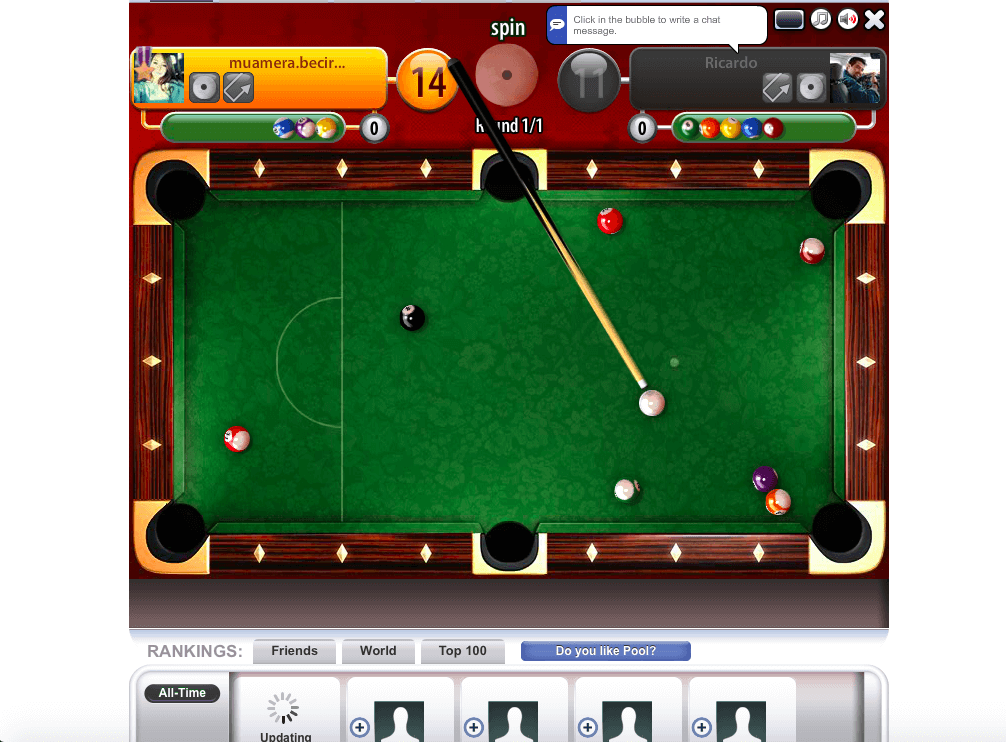 Finally I was back in the game.

My online pool career wasn’t looking promising, but I wasn’t giving up so quickly. I decided to test my luck by starting another game. This time I received an equally cordial player who was outrageously good at the game. Despite my opponent’s obvious advantage, I still put up a good fight. Before long I was ahead by two strokes! As I was enjoying my winning streak, my opponent was planning my demise. She came back with a fierce combo that blew me out of the game. Even though she won, I was consoled by the fact that it was only by one ball.

Pool Billiard is an exceptionally entertaining game! You get to face opponents from all over the world. Most of them have an insane amount of experience, but despite this disadvantage the game is extremely easy to learn. Before long you will go from a complete novice to someone who can put up a fight. The only feature that can be slightly distracting is the chat option. However, most players keep it civil with the comments. I would highly recommend this game to anyone who needs to kill some time.