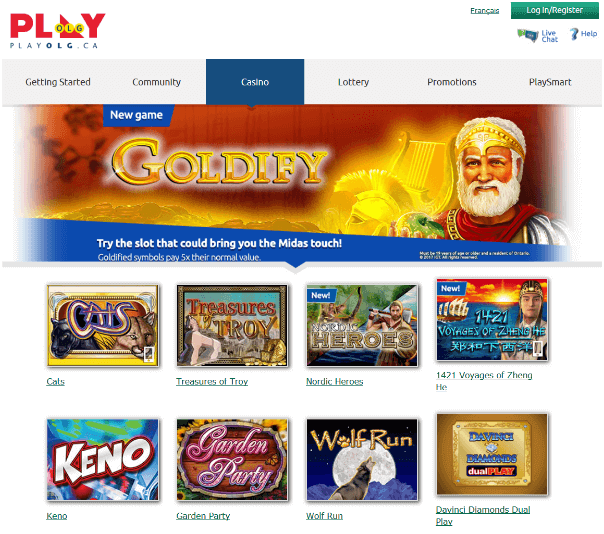 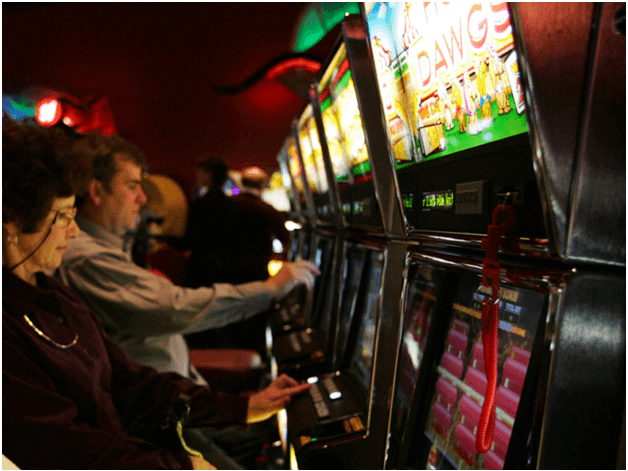 There are so many new slot machines that are released each month but not all slot machines arrive in Canada. Here are 7 new slot games to play in Canada right now. These slot machines can be found at Canadian real casinos and Canadian online casinos prominently being now displayed at play OLG Canada. 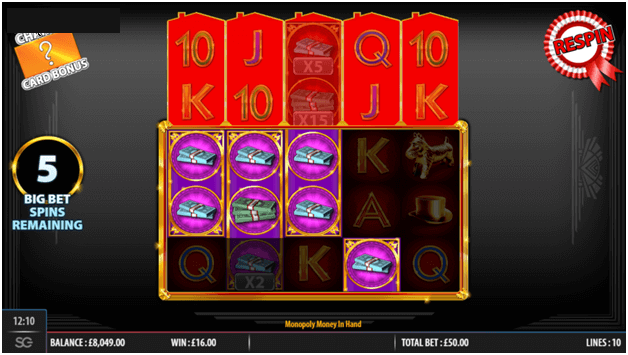 Play Monopoly Money in Hand online slot is powered with Barcrest and comes with Free Spins and Cash Multipliers! In free spins look out for the cash multipliers to deliver the big wins! The minimum bet in the game is $0.10 and the maximum bet is $200.00. Play Big Bet for even more fun with the Respin and Chance Card Bonus Features delivering extra chances for Free Spins and Extra Cash! Big Bet also gives you the opportunity to play with the House and Hotel Extensions to expand your reels up to 5X5 and increase your chances of big wins! The max win in this slot game is $250,000 per spin. 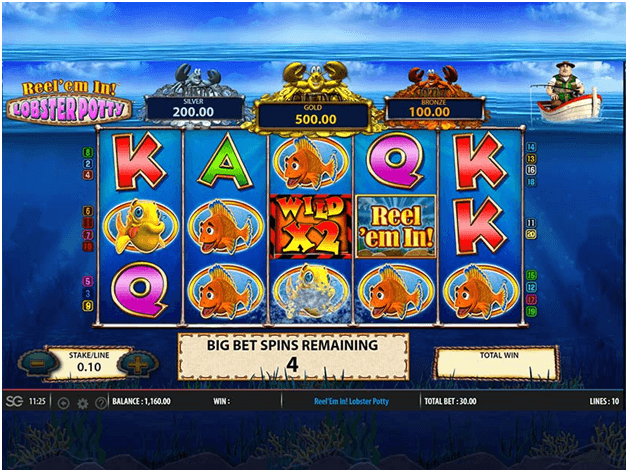 Reel’Em In Lobster Potty online slot is a 5-reel, 20 win line slot game where sandy backgrounds on all 5 reels trigger Reel em In Bonus feature or Lobster Pot Bonus Feature. It also boasts Big Bite and Mega Bite bonus features in Big bet Game.  The minimum bet is $0.20 and maximum bet is $200.00. Powered by Barcrest punters will certainly want to activate the main bonus round. This round is activated when the backdrop for each of the five reels is that of sand. Once you have managed to do this, any number of the reels will randomly spin. Any fish that land on the reels will bring you a reward and if any boots are found, they will end that reels participation. All of the prizes are then added up and rewarded to you.

One final feature on this free online slot is that of the Lobster Pots Bonus. Again, this is activated when all the reels have sandy backgrounds. This differs from the previous round in that just the middle reel will spin. Punters will either land a bronze, silver or gold lobster which will return the respective prize. There is a chance that players could land as much as 500x their original spin bet in this bonus. 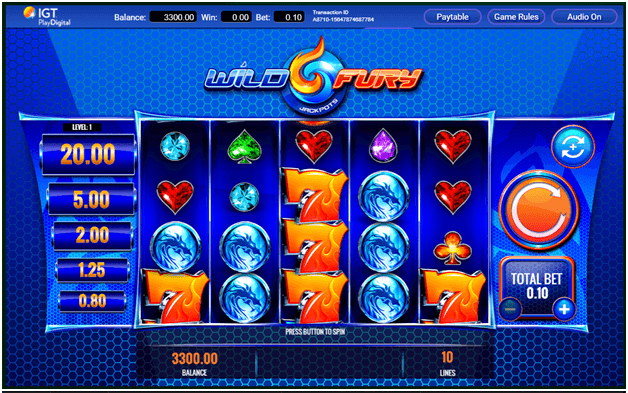 Wild Fury Jackpots is a slot with a style all of its own, where popular symbols such as playing card suits, number 7’s, and dragons are given an impressive makeover. Playable from just 0.10 per spin, this medium volatility slot machine has five reels, ten paylines, and special features that include stacked wild symbols, plus those free spins with a guaranteed jackpot win. Standard symbols need to land on at least three reels from the left across a payline, helped out if needed by the wild symbol that can substitute for others.

Diamonds and jewelled playing card suits each pay out five, ten, or 30 times the amount staked on each payline when stopping on three, four, or all five reels. Blue and golden dragons are valued at up to 60x and similar-colored 7’s pay up to 100x you per line stake. Look out for the wild symbol though, as it’s a special icon in a number of ways in this slot machine.

As well as acting as other symbols, this flaming ball of energy pays 40x, 125x, or 500x the line stake depending on how much of a payline it fills. It will also be stacked several high on any reel, which makes it much easier to complete extra combinations for you. 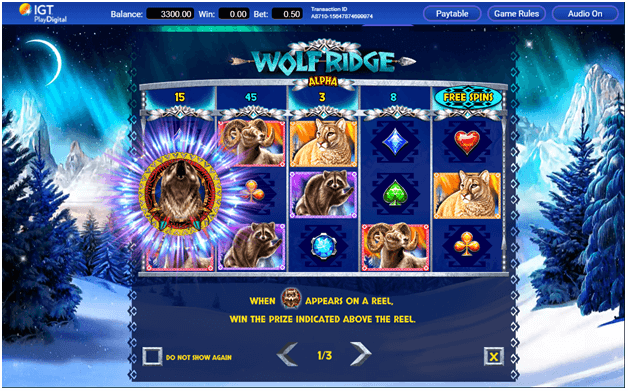 Bask in the glow of the Northern Lights and enjoy the howling big wins in Wolf Ridge! Rich rewards abound in the snow fields when Bonus scatter symbols appear on reels 1, 3 or 5 and trigger the Prize Disk feature, where each triggering symbol pays a bonus win or awards free spins. Bonus scatter symbols can appear on all reels in the Free Spins Bonus, offering even more chances to experience the untamed abundance of the Prize Disk feature.

Collecting a Free Spins icon from the Prize Disk on the Wolf Ridge slot will award 10 free spins for each icon. Any free spins symbol collected during the round will award +2 free spins, up to a maximum of 250 free spins. 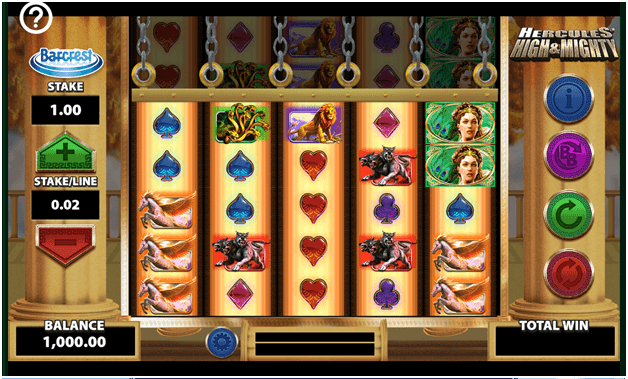 Featuring the son of Zeus in all his glory, Hercules High & Mighty is a 5-reel, 10-row slot that promises to excite with a stunning portrait mode interface and a slew of special features including expanding and persistent expanding wilds, big bet, free spins and more! The final outcome depends on both your wager and the combinations that appear on the screen. By betting more money in Hercules High & Mighty, you might unlock bigger rewards during the game. Hit the big bet button to trigger more betting options, which also reveal extra rows of symbols and unlock 100 paylines. Bet 20, 30 or 50 credits at once to take an extra risk and remove some of the lowest-paying symbols from the reels as well. A Rich

The spade, heart, club and diamond are the well-known 4 suits of cards, and also the most common symbols in Hercules High & Mighty. Their combinations are worth between 5 and 50 credits, giving you an opportunity to score several modest wins early in the game. The maximum reward is 250 credits if you stick to the standard paytable here. 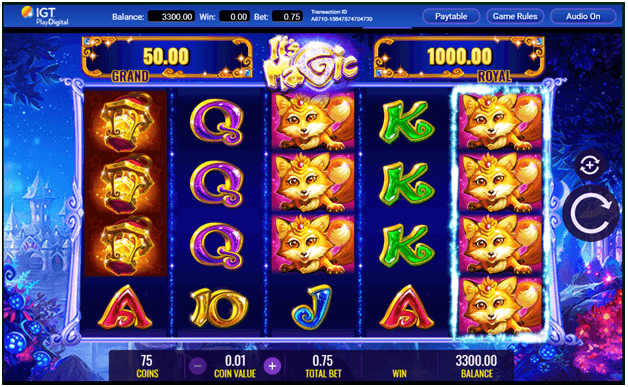 Enchantment encompasses the reels in It’s Magic. The Wild Reel feature transforms a full stack of the same symbol on a reel into a stack of Wilds on the next spin! Trigger the Free Spins Bonus for even more spellbinding wins. The Free Spins Bonus awards 10 to 45 free spins depending on the number of triggering Bonus symbols. Will the Magic Wheel Bonus trigger randomly on any base game spin? You may win the Royal or Grand Jackpot! Before you start to play for real cash, you will want to decide how much to stake on each spin of the reels. Options range from just 0.75 right up to a maximum bet of 150.00.

Like many slots, the smaller but usually more frequent prize payouts come from playing card symbols. Each of the 10, J, Q, K and A icons is worth up to 25 coins when you land a full line of any kind. A tabby cat, a long-lashed female cat, and the monkey will each pay up to 120 coins. There are high limits of 150 coins to collect when either the spell book, the magic lantern or the treasure chest fills a payline. A beautiful magician named Lily is the most valuable symbol. Unlike other symbols that need to be seen on at least the first three reels of a payline to be worth anything, she returns wins of eight coins just for landing on reels one and two. A full line of five Lily symbols will be worth 400 coins. Lily is also a stacked symbol that fills four rows – which makes it easier for her to stop on a payline. 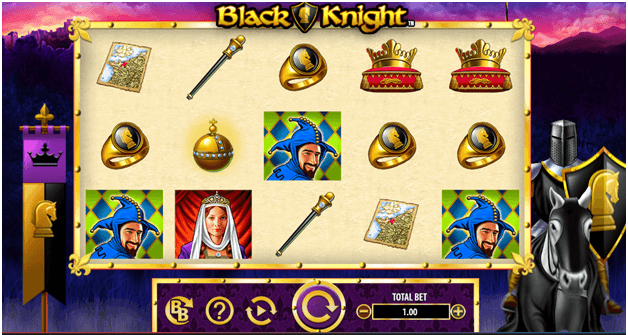 Black Knight is WMS slot game with 30-paylines that has managed to build a decent following since its online introduction. It has actually been so popular that a second game, the Black Knight 2 slot machine, has recently been released online as well. This slot game will take you back to the era of Kings, Knights, and Queens. The game is based on the Black Knight who is mostly associated with wars and death. This game features a Free Spins bonus round a medieval theme. The game also comes with a top Jackpot worth 10,000 coins. This game is definitely crafted to entertain all epic adventure lovers.

Black Knight vowed to fight for the glory of his kingdom, to win riches and to honour his fair maiden. Black Knight features wilds, scatters and a powerful free spin feature with expanding & sticky wilds that cover an entire reel.