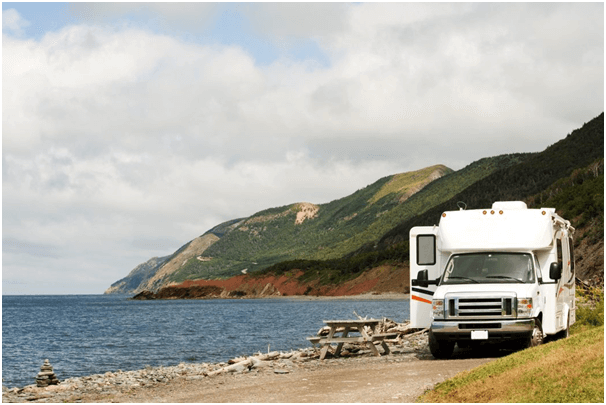 As the Spring sets and summer days are awaited ahead it is time to view the nature of Canada. If you love to drive and want to take shots of the best landscape around then why not plan out a road trip with your friends and family. Road trips have their own adventure and charm. Here are the 7 best Canadian road trips to enjoy. 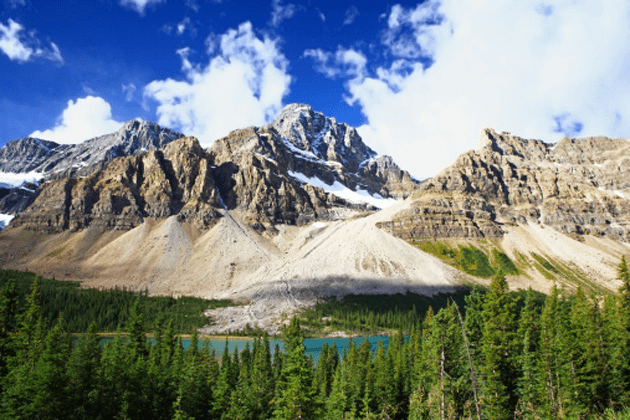 Spanning over 7800 kilometres from Victoria, British Columbia to St. John’s, Newfoundland, the world’s longest national highway is undoubtedly the ultimate Canadian road trip. It is a common view that you haven’t experienced Canada until you’ve driven through the prairies and seen the contrasts of both coasts. You’ll find many of Canada’s must-see experiences along the way, including the Bay of Fundy, the historic villages along Quebec’s Route 132, and our nation’s capital, Ottawa  — and more

The Trans-Canada Highway isn’t a single route — it’s more like a network of routes with opportunities for trips of all lengths. TransCanadaHighway.com suggests some one week road trips, such as “Ride the Rockies”, “Prairie Ramble”, “Historic Ontario” and “East Coasting” — and you can create your itinerary using the planning guide and mobile app. 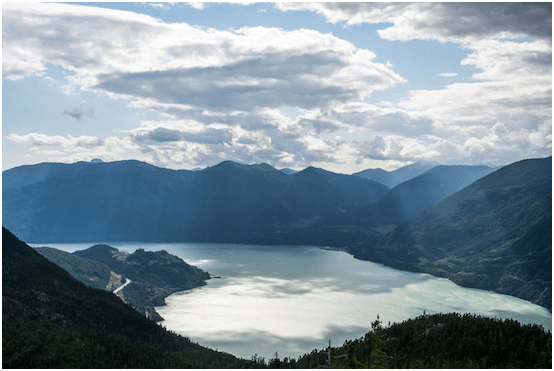 The Highway 99 aptly named the Sea to Sky Highway starts just outside Vancouver in Horseshoe Bay, and the route offers a little of everything from the coastal rain forest along Howe Sounds to the fierce mountain peaks on route to Whistler.

While the highway is a convenient way to travel from city to city, this 125 km route has plenty of reasons to explore along the way. Small communities dot the route, including the former mining community of Britannia Beach and the just-right-sized town of Squamish, where you can learn more about Aboriginal culture and art. 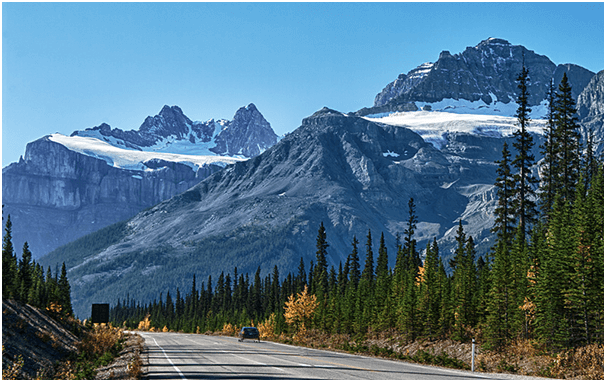 The Icefields Parkway runs a modest 232 km between Jasper and Banff, you’ll want to allow plenty of time for stops. Winding along the edge of the Great Divide, the route promises pretty views of lush meadows, waterfalls and the snow-capped peaks of the Rocky Mountains. While a short route, there are places you’ll want to stop for the night like alongside the pristine turquoise waters of glacier-fed Lake Louise. 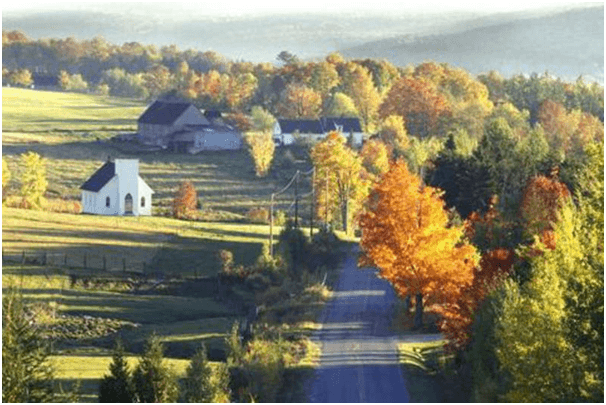 Taken individually or combined for a longer trip, Bonjour Quebec’s Country Routes offer something to suit every taste. Each route has a theme or highlight, like the Whale Route which stretches 900 km along the Gulf of St. Lawrence to Labrador. The King’s Road connects Repentigny and Old Québec City travelling through small history towns along its 260 km route. The Mountain Route takes you through Charlevoix World Biosphere Reserve and shows off some of the highest peaks in the Laurentian Shield. 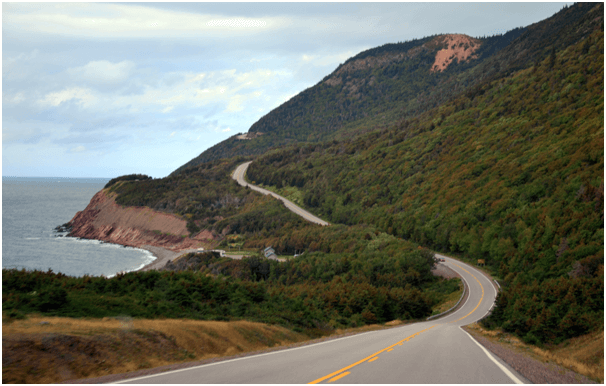 The Cobot Trail is 300 km route road trip to try when you want to get to know an area in a little more detail.  Hike the trails of Cape Breton Highlands National Park and stop for a swim or test your skill at the Highlands Links golf course. Take in a Celtic music festival and immerse yourself in the province’s Scottish and Acadian heritages. Try your hand at fishing, and find out why the Cabot Trail is really “a 300 km seafood trail” with its renowned lobster and crab dishes. Head for the greens at one of the island’s six top-notch golf courses, making sure to book reservations at the Cabot Links, Canada’s first true “links” golf course, set to make its debut in Inverness County early this summer. 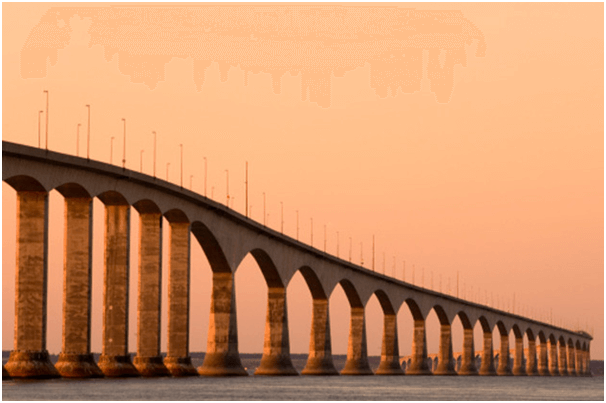 This trip starts with really big bridge — the longest one to cross ice covered water, in fact. The Confederation Bridge’s 12.9 km span takes about 10 minutes to cross and reaches a height of 60 m at its highest point. The bridge even has its own weather monitoring station and warning system to let drivers updated on conditions.

There is a lot to see on the “Gentle Island”, including the Green Gables of Canadian literary fame. Over 1000 km in total, three scenic drives — North Cape Coastal Drive, Central Coastal Drive and the Points East Coastal Drive,  loop around different sections of the island. Beaches, lighthouses, beautiful cities and fishing ports await, not to mention a healthy dose of Mi’kmaq culture and Acadian culture. 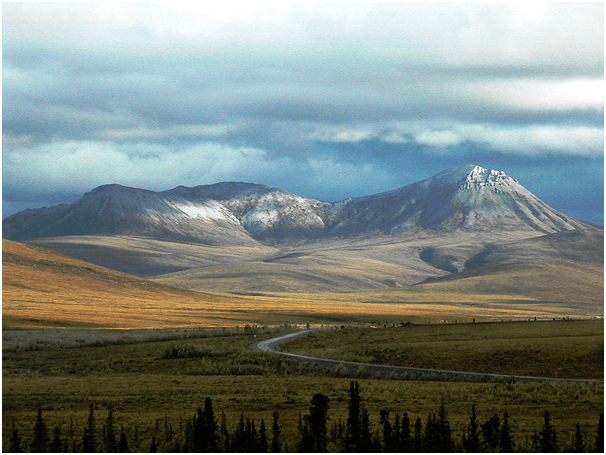 This 671 km route takes you from Dawson City, Yukon across the Arctic Circle to Inuvik, Northwest Territories. Originally built to facilitate oil and gas exploration, this once controversial route is uniquely constructed to help protect the permafrost beneath. The drive is more challenging than your average highway, but the rugged, northern Canadian wilderness makes it worth the trip. You’ll want to time your trip just right to see the tundra and mountain ranges at their best.

Besides these 7 you can take road trip from Calgary to Lake Louise Alberta, Stradford Ontario, foodie tour through Kelowna BC, Pelle Island Ontario and many more. Have fun.