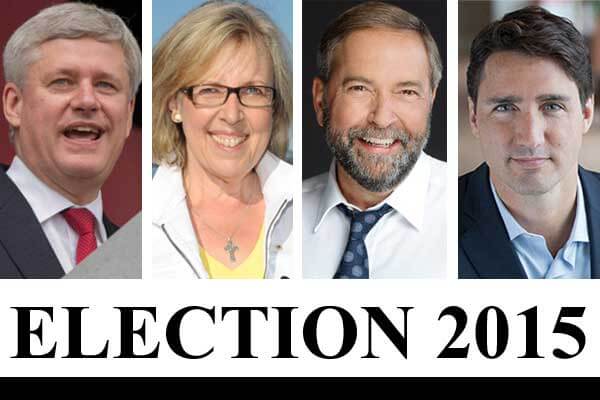 The 2015 Canadian election has been riddled with conflicting reports, empty promises & downright silly arguments. Experts are now predicting an epic showdown between Stephen Harper and Justin Trudeau since support for the NDP has waned & Tom Mulcair has been left in the dust. With the upcoming election quickly coming upon us only one thing is clear: politicians will promise anything to get votes.

Three major reporting agencies have come up with three different poll results, adding to the hectic confusion and uncertainty of the current election. Just a few months ago the polls unanimously agreed that Tom Mulcair was destined to become the new prime minister. Now the polls suggest that the NDP has lost traction in the election and Tom Mulcair is now destined to become the new political outcast. While Nanos Research is proclaiming that Justin Trudeau is winning with 33.5 per cent, the Angus Reid Institute is calling victory for the Conservatives with a whopping 7 percent lead. Innovative Research is also echoing a close race between liberals and conservatives with varying numbers. Unfortunately all of these polls have liberal amounts of margin of error, making their predictions nothing more secure than the flippant promises offered by the desperate politicians fighting tooth and nail for office.

However all of the current polls point to one truth, Tom Mulcair is screwed. So what happened to a candidate that seemed to have such a promising future in politics? We can only blame his failed strategy to appease everyone. While Justin Trudeau & Stephen Harper are representing completely opposite sides, Tom Mulcair has tried to appease the masses. While Justin Trudeau promises to legalize marijuana & Stephen Harper openly supports an armed witch hunt against weed, Tom Mulcair says he would decriminalize it. Taking an on the fence approach to controversial topics has become the downfall of Tom’s dreams for office.

We have to realize that elections are nothing more than drummed up scripts portraying each candidate as a bold just leader who is vehemently opposing a shortsighted lunatic. People love good stories, controversy & someone to point the finger at when their lives are in shambles. For this reason politics has become nothing more than a multi-million dollar name calling act where each candidate promises to cure all the woes incurred by the rival party. So if you want to make it in this game, you have to make statements that get you the publicity and controversy that you deserve. Stephen Harper has claimed that if reelected he will create a staggering 1.3 million new jobs & that smoking marijuana is more harmful than cigarettes. While the probability of either of those things being true is ridiculous at best it has generated active media attention for Stephen Harper. Justin Trudea has promised to give Canada back to the people and legalize marijuana, and his supporters love him for it. So where will all these promises and name calling get them? Either in office or damn close, welcome to politics.