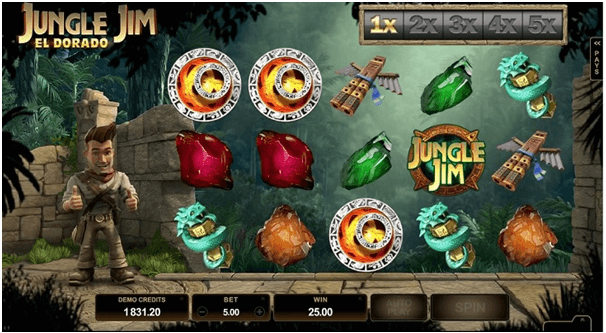 Jungle Jim El Dorado slot is ‘basically’ Gonzo’s Quest with 5 extra paylines and a different character a game developed by Microgaming. The new Jungle Jim character is a fun cute game guide reminiscent of a young Indiana Jones, not vaguely creepy like Gonzo and takes place in two very distinct settings. The base game is in the lush south American jungles,  and second is a gold laden treasure room, in Eldorado itself, which again is stunningly rendered. The whole game is beautifully drawn for that matter, including Jungle Jim himself.  The reel icons will come as no surprise, there is a host of coin chests, rare native treasures and rare gems on offer like the emeralds, rubies and the like are large rough uncut stones such as you would find in the jungle.

The pay-lines are fixed so there’s no real user interaction in game style outside of choosing your betting and bankroll strategy. There’s more than enough room in the bet range to satisfy all kinds of players too.

The symbols are a range of theme-related objects and include a treasure chest, a totem pole, an Aztec mask and a blue serpent; four coloured gems – red, orange, green and blue – make up the lower values.

The Jungle Jim logo is wild and will replace all others in a winning combo except the scatter – that’s a complex circular object and it activates the main feature.

Jungle Jim comes with the good old Rolling Reels feature which is active in the base game and free spins; whenever you land a winning combo those symbols involved will disappear to be replaced by others falling in from above – more combos may then be formed and the process continues in this manner. Consecutive wins increases the multiplier up to a maximum of 5x.

Free Spins is triggered by landing three of the circular scatter symbols anywhere in view; you will now receive ten free spins which can be retriggered in the same manner.

During this round the Rolling Reels multiplier increases to 3x, 6x, 9x, 12x and 15x for some bigger wins.

All wins are subject to a 3x multiplier and increase to 6x, 9x, 12x and 15x for consecutive wins. This means that every free spin could be subject to a massive 15x multiplier. Furthermore, 3 scatters during the feature will reward you with a further 10 free spins taking your total to 20 free spins potentially.

Jungle Jim El Dorado is a medium variance game with the maximum win being a whopping 3,680 times your stake – this will obviously come in the free spins feature due to the potential 15x multiplier.