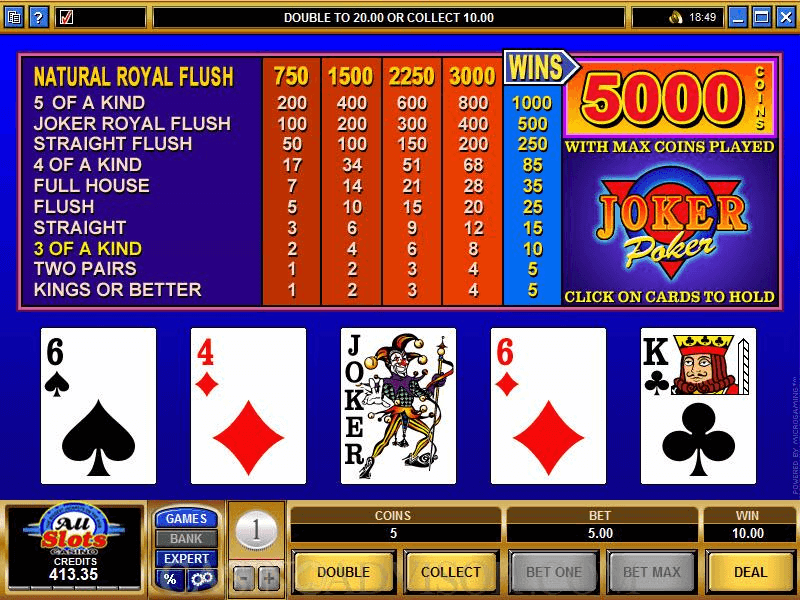 Joker Poker is one of Microgaming’s  simpler video poker games. This title features only the bare necessities as far as graphics go, but it does have a lot of playability, especially if you favour video poker games, over more traditional table poker titles. Even amateurs should be able to quickly pick up the gaming style in Joker Poker. As with all of Microgaming’s video poker games, you aren’t taking on the dealer or any other players directly. Instead, this game is simply about building a winning poker hand. To begin with, players will have 5 cards on the screen. The game will automatically pick the cards which give the player the best chance of a win. However, you can unselect those cards by clicking on them. Select the cards that you think you wish to keep, and hit the draw button to pocket replacement cards for the ones you don’t. Keep in mind that jokers act as wilds cards, which can replace all other cards in this game. After the second hand, your poker hand is complete, and if it matches one on the paytable, you will pocket a win.

Joker Poker is played with 53 cards – there is the standard 52-card deck, in addition to a joker, which is a wild card and can, of course, be used to complete winning combinations. The cards are shuffled before each and every game, so you have a random deal.  To make bets, you can use the (+) and (-) control, which incrementally serve to increase or decrease the size or your wager. By clicking “Bet One” you are wagering one unit times the size of your base wager, and when you want to bet the maximum, you just click “Bet Max.”. It’s very, very easy. By clicking the “Deal” button you get things rolling. You get five cards, and then decide which cards to hold by clicking them.

Clicking “Draw” gets you new cards to fill out your hand. But there’s another way to go. There is an option called “AutoPlay,” available when you convert from Regular Mode to Expert Mode, and what this lets you do is to have your hands played out automatically, according to the best mathematical decision that can be made for any given set of circumstances.

When you open the game on your mobile or PC screen you will see that at the bottom of the screen is Microgaming’s wagering control menu. Players can opt to bet anything from a floor of just 1.25 per hand, up to a ceiling of 25.00 per hand in this video poker game.

Symbols are the playing cards. When you achieve the desired objective of a winning hand, you actually have a chance to increase your win. That is through the option of “Doubling,” which is another great feature of this game. Doubling lets you choose a face-down card to go up against a dealer’s face-up card. If your card is of a higher value, you win double the amount of your original win. You can keep doubling or decide to collect at any time.

The winning hands in Joker Poker, starting from the highest to the lowest, include the following:

It is a really basic video poker game that is fun for all to enjoy. The use of wilds and the lowest paying hand being a pair of Kings mean that you are likely to encounter wins fairly often. Because of this, the lowest pay-outs often only see you win your money back, but even that is better than losing.

Dealt hands fall into two categories: Those hands that have a Joker and those that do not. The following strategy will show you what to do when you have a hand with a Joker or without a Joker.

If you are dealt a hand with a Joker:

If you are not dealt any of the above combinations, discard all cards except the Joker. It is important you always keep in mind that the Joker is part of the combination that you are looking for. For instance, two 8s with a Joker is Three of a Kind.

If you are dealt a hand without a Joker:

If you do not have any of the above combination, discard all cards and draw five new ones.

The biggest jackpot available in this game is as much as 5000 coins (contingent upon the maximum amount of coins wagered, of course), which happens when you get a “Natural Royal Flush,” which is a royal flush that is put together without any help from wild cards.