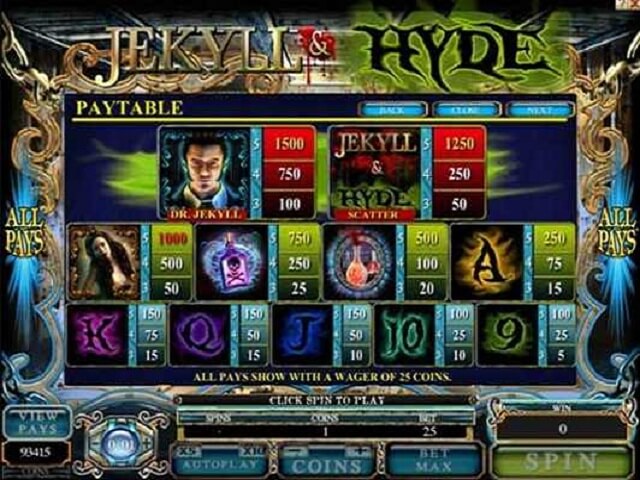 Jekyll and Hyde brings the classic tale that exposes the dual nature of mankind to the world of video slot games. This Microgaming adaptation features the kind of state-of-the-art graphics and prize-stacking features that we’ve come to expect from the gaming giant. You can play Jekyll and Hyde at Microgaming casinos such as Captain Cooks Casino, All Jackpots Casino, Maple Casino, and many others.

Jekyll and Hyde has a very gothic look to it, with a lot of dark colors and mystical looking elements such as bright swirls of color that give the typical 9, 10, J, Q, K, and A symbols a ghostly feel. Other symbols include Dr. Jekyll’s portrait, his beautiful love interest, the poison, other vials of mysterious liquids, and the game’s logo. Throughout the game, the music and sound effects tap into the legendary story, including a very different feel and set of sounds when you get free spins and the game turns to the Hyde side of things.

Coin values don’t have much of a range, going from between 1 cent to 10 cents. However, the betting range goes from 25 cents up to $25, so you can still have a decent range of total betting amounts as you play Jekyll and Hyde.

The largest regular win is 1,500 coins, with other large wins not falling very far behind at amounts of 1,250 and 1,000 coins. These amounts are figured based at bets of 25 coins.

To win the 1,500 coin jackpot, you have to get five Jekyll symbols on an active payline. Meanwhile, the 1,250 coin jackpot comes from getting five of the game’s logo symbols, and you can win 1,000 coins by landing five of the beautiful love interest’s symbols on an active payline. Unfortunately, there are no multipliers in Jekyll and Hyde, so these prizes are as good as it gets.

The scatter symbol is the Jekyll and Hyde logo, which pays in any position. If you get three or more of them in any position, you will also get ten free bonus spins as the game shifts to Hyde’s perspective.

The free spins don’t constitute a true bonus game in Jekyll and Hyde, as the play mechanics don’t change at all. However, the board does change, as does the music, as we enter the world of the ghoulish Hyde. Another thing that you’ll notice about the free spins mode is that there are no multipliers during it.

Jekyll and Hyde does not compete with some other video slots in terms of features or multipliers that can bring eye-popping wins. However, the theme is very cool and the wins you can get are respectable and happen pretty often to keep you engaged. Many Canadian players will find that Jekyll and Hyde quickly becomes one of their favorite slot games.