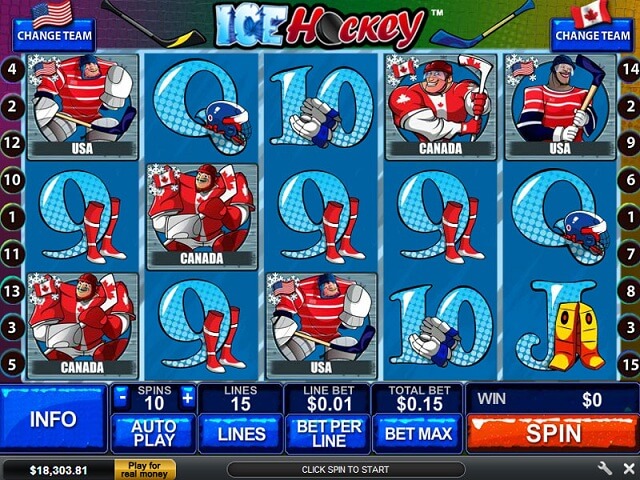 Ice Hockey is a really cool video slot game that thrusts hockey lovers from Canada and around the world into the excitement of international hockey. The game is not a lazy cash-in on the sport’s popularity, but instead a pretty interesting take on ice hockey in video slot form.

Our friends at Playtech designed Ice Hockey, so to play it you will have to visit a Playtech-based casino such as BetFred Casino, Circus Casino, Omni Casino, and Bet365 Casino, among others.

Right off the bat, Ice Hockey grabs your attention, as it starts with the kind of set-up you may expect more an ice hockey video game than a slot. You pick your favorite team and your opposing team, as well. You can choose between the U.S., Russia, Germany, Czech Republic, Sweden, Finland, and of course, Canada. Your team pays left to right, while the other team pays right to left. It’s a really creative set-up for sure.

The symbols, then, will include various players draped in your team’s (and your opposing team’s) jersey, as well as your typical 9, 10, J, Q, K, and A symbols. You’ll also have the sound effects and music you would expect from an exciting slot based on a game like ice hockey. The graphics are cartoonish and amusing, and the theme works very well.

Ice Hockey has a really nice coin range, as it starts at just 1 cent and goes all the way to $1 CAD, with coin values such as 2 cents, 5 cents, 10 cents, and 25 cents in between. You can only bet one coin per line, so to play all 15 lines, you can play for just 15 cents per spin or as much as $15 per spin, if you prefer. It means just about everybody will be happy with the betting possibilities.

The top jackpot is really nice for a game like this, with 10,000 coins. Of course, there are also free spins, multipliers, and other bonus features that will help you to win even more, but 10,000 for a base jackpot is very nice, indeed.

The goal symbol is the wild symbol in Ice Hockey, as well as the most valuable symbol in the game from a coin standpoint. It substitutes for all but the special symbols.

What are the other special symbols? They include the flag bonus symbols, which only appear on reels 1 and 5 and can trigger 12 free spins. The puck symbol is also a special bonus symbol and appears on reels 2 and 4 exclusively. It triggers a special bonus mode if a player appears directly on the left (when the puck is on reel 2) or the right (if it’s on reel 4) of the puck.

Finally, there is the game’s scatter symbol, which is the Ice Hockey game logo. It pays up to 125 times your total bet if you get five of them anywhere on the screen, and that’s in addition to other winnings from that spin. Unfortunately, it does not activate any other type of bonus game.

The flag symbol, as mentioned before, gets you 12 free spins if only one team appears on the reels while you have their flag on reels 1 and 5. Free spins cannot be re-triggered and do not carry a multiplier, which is a bit of a bummer. However, your chances of a big win are greater, because only one of the two teams appear during free spins, increasing your chances of getting the other team for a huge prize.

Canadian players in particular may only be interested in Ice Hockey because of its theme, but it actually has much more to offer than just that. The bonus features are really cool, the game’s structure with being able to pick teams is also very interesting, and the betting range is suitable for a wide range of players, making this game a solid match for many people in Canada and around the globe.