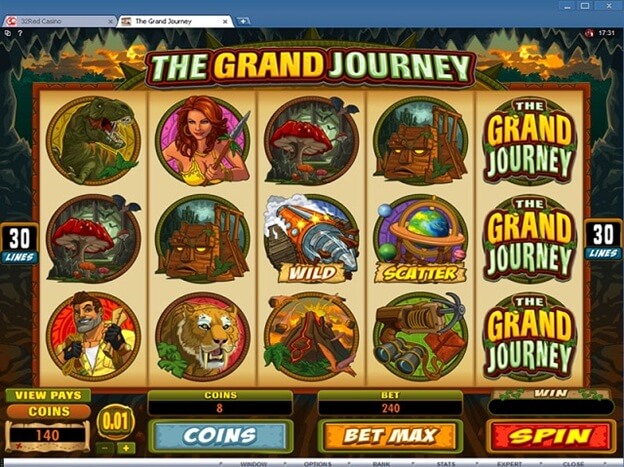 The Grand Journey presents a jungle theme, with symbols that will bring excitement to the player. The symbols include a globe, a male adventurer, a female adventurer, dinosaur, lion, volcano, temple, mushroom and adventurer’s tools.

The player needs to set the number of coins and the coin value in order to be able to play the game. The line number is fixed to 30, so that the player cannot change the number of lines played. By clicking on the Spin button, the player will start the adventure, in which he can win great prizes. Of course, the prizes are influenced by the bet size, so that the player will win more with the same combination at a higher stake. In order to win, a minimum symbols of the same are required to appear from left to right in consecutive order on the reels.

There is also an expanded wild symbol in this game, which if appears anywhere on reel 3, will expand and turn the entire reel wild. This symbol can also substitute for all the symbols, except the scatter symbol.