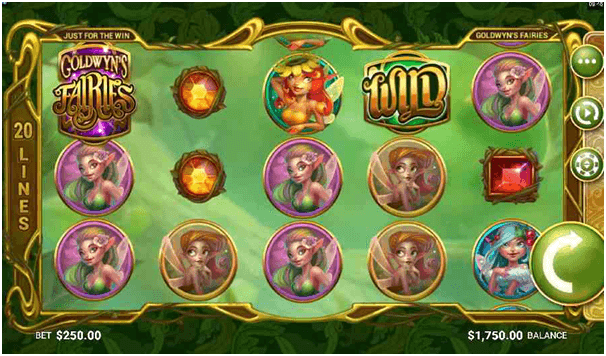 Goldwyn’s Fairies is a 5 reel, 20 payline slot powered by Microgaming and produced in co-operation with Just for the win game development. Playable from 10p to CAD$250 per spin across all devices, this fairy themed offering offers you a unique and enchanting experience with three bonus features.

You are taken to an enchanted forest which has a soothing yet uplifting soundtrack – on the reels, symbols include four sparking gems as well as the Four Fairies of the Seasons (Summer, Winter, Spring and Fall).

Offering an glimpse into a hidden kingdom of magical folk, you’ll be playing for real cash prizes on the reels as you explore. Utterly bewitching with mesmerising play, step away from the stress of everyday life to enter into the land of the fairies. Set in a magical woodland, the symbols on the reels are clear and bold, with no distracting designs to confuse the eye.

In Goldwyn’s Fairies you bet on the total cost, not a stake per line which makes it easier to ensure you’re sticking to your budget. The total min bet is only 0.10, making it the perfect example of penny slots. But it also offers a lot for high rollers too, with the total max bet cranking up to an impressive 250.00.

The four lower paying symbols are vintage looking gems in various shapes and colours. You create winning combinations by matching three or more of the same symbols on the paylines, but to help you to succeed there are not one or even two, but three wild symbols: Classic Wild, Free Spins Wild and Re-spin wild as said above

The Classic Wild symbol is used in the base game mode as well as the two Final game modes, so you can always be sure that there are some wilds around to help you create some outstanding winning combinations.

The classic wild is the most rewarding symbol giving you 25 times your total stake for 5 across a payline.

The Free Spins feature is played when you get the free spins symbol simultaneously on reels 1, 3 and 5. This will reward you with 10 free spins – 9 of them use the Returning Wild feature and the other is a final free spin.

Goldwyn’s Fairies is an enchanting game and it’s a medium variance offering with potential wins of up to 633 times your total stake on each spin. The key to winning big is via the last Re-spin or Free Spin as you can get extra wilds if wilds fall on a Returning Wild.