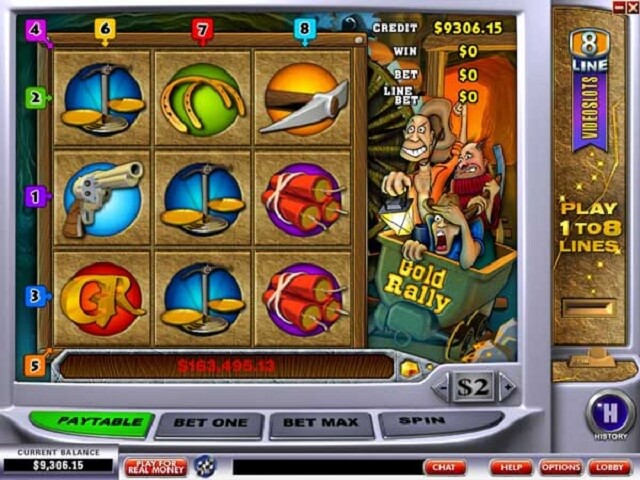 Gold Rally takes you on a gold mining adventure with three rather hapless looking miners who, like you, are hoping to strike it rich. This Playtech game features a colorful and humorous theme to compliment solid and unexpected play mechanics. You can play this game at Playetch casinos such as Cherry Casino, Casino Tropez, Casino Bellini, and more.

The theme of the game is clear from the outset, with a large part of the right side of the screen devoted to our bumbling heroes, the three gold miners. Since this is just a 3 reel game, there is plenty of room to see what you’re doing, and the extra space allows you to keep up with the miners’ adventures as the game continues.

Symbols such as revolvers, dynamite, mine carts and pickaxes both stay true to the gold mining theme and hint at the misadventures that await. Sound effects and background music also contribute immensely to the theme, which is very enjoyable and different from the norm. Also different from the norm is that this 3 reel slot has 8 paylines, which include vertical and diagonal paylines along with the classic horizontal ones.

The coin value is fixed at a rather high $2 in Gold Rally, so to play all 8 paylines, you will have to pony up $16 per spin. There is only one coin allowed to be played per line, of course.

Gold Rally not only features a progressive jackpot that can be won, but also some other nice prizes topping out at 500 coins ($1,000 CAD), too. That’s a pretty nice standard jackpot.

To win the 500 coin standard jackpot, you have to get three of the Gold Rally logos across an active payline. In addition, you can win a quick 200 coins with three horseshoe symbols, and scatter payouts can reach 200 coins as a standard amount, too.

Of course, the grandaddy of them all is the progressive jackpot, which you will need plenty of scatter symbols to reach. The scales (presumably to weigh your earnings) are the symbol to watch for, and you need to fill all nine spots with them in order to win the progressive amount.

Doing so has netted lucky winners an average of $888,000 so far, with the highest win on record being an impressive $1.6 million! Even the lowest win has been a respectable $117,000, which is still an amount that can certainly make your day.

While this game lacks a wild symbol, it has both a scatter and bonus symbol. As mentioned earlier, the scatter symbol is that of the scale, and is not only the key to the progressive jackpot, but can also win you 200 coins (for getting 8 of them), 50 coins (for 7), and so on.

The bonus symbol is the dynamite, which will blast you through to the bonus game if you can collect one of the symbol on each of the four corners of the reels. This is a clever way to trigger a bonus game that is appropriate for such an original game.

In the bonus game, you get to blow a bunch of things up while revealing prizes until you reveal the “You Win” message, which ironically ends your time in the bonus round. The bonus round can help you accumulate even more winnings in a hurry.

If you want a video slot game with a progressive jackpot, a fresh take on play mechanics, and a great sense of humor, Gold Rally would be perfect for you. This game is well worth your time and could make you a lot of money in a very short number of spins.