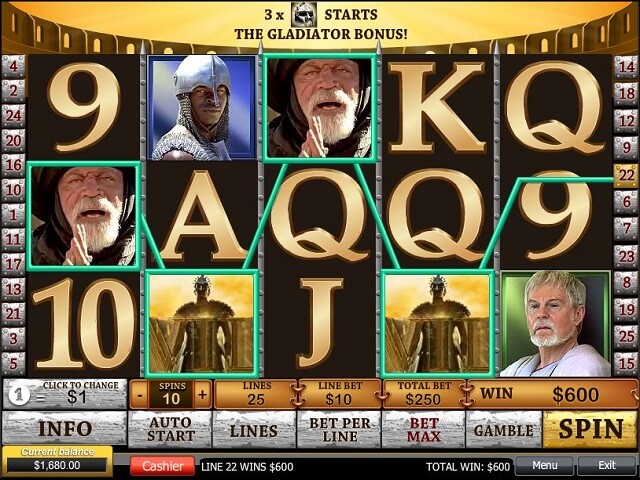 Gladiator, the 2000 film directed by Ridley Scott and starring Russell Crowe, was a huge success, even winning Best Picture at the 73rd Academy Awards. As a film that still resonates with people to this day, it’s no wonder that the officially licensed video slot by Playtech continues to be one of the most popular online slots on the entire internet.

If you want to relive the epic movie while vying for a huge jackpot, you can do so at Playtech casinos such as City Club Casino, Winner Casino, Omni Casino, and many others.

This stunning 5-reel slot offers 25 paylines that can grant players with very memorable wins. However, as one might expect, the real attraction here is the game itself and the way that it brings the world of the Gladiator film to life.

All of the memorable characters are here, from Maximus himself to Commodus, Proximo, Lucilla, Juba, and more. The Coliseum is also pictured, and there are 9, 10, J, Q, K, and A symbols in black and gold to match the attractive theme of the video slot itself. Animations are not spared here, as you will see short clips from the film when you win certain prizes with character symbols.

You would be hard pressed to find a game that has a wider selection of possible coin values than Gladiator does. Gladiator offers coin values that can be set as low as 2 cents and as high as a whopping $25 per coin, with many values in between. That means that you can play for just 2 cents per spin, but with 25 lines and 10 coins per line maximum, you can also bet $6,250 per spin if you’re a (really) high-roller.

While Gladiator’s jackpot is not progressive, it is larger than most progressive jackpots get, nonetheless. You can win over a million dollars in one spin, with a $1.25 million top prize in this online video slot.

To win the highest prize in Gladiator, you will not multipliers, which are supplied in the Coliseum bonus game, which is triggered by the scatter symbol. There, win multipliers and wild symbols will help you to rack up huge prizes in a hurry.

Gladiator features two special symbols. The first is the mask that Maximus wears in the arena in the movie. The mask appears on the middle three reels and is wild, substituting for any symbol but the scatter symbol. It also can start the Gladiator bonus game.

The scatter symbol is represented by an outside view of the epic Coliseum itself. This symbol pays off when you get two or more across any of the reels. It can also trigger the Coliseum bonus game.

The Gladiator bonus feature is triggered when you get three of Maximus’ masks on one spin. It simply reveals masks, which have random wins that add up to your running total. It’s not very interactive, but can be quite profitable nonetheless.

The other bonus game is the Coliseum bonus game, which is triggered when you get three or more scatter symbols on one spin. Then, you choose from stones in multiple columns, which you choose from to reveal prizes such as bonus wins, free spins, or multipliers.

Gladiator is a no-brainer for fans of the movie, but it’s such a good slot with so many features (not to mention, a huge jackpot) that it’s also a great choice for those who have never even seen the film. It’s a truly well-rounded game and it’s hard to imagine someone not enjoying it.