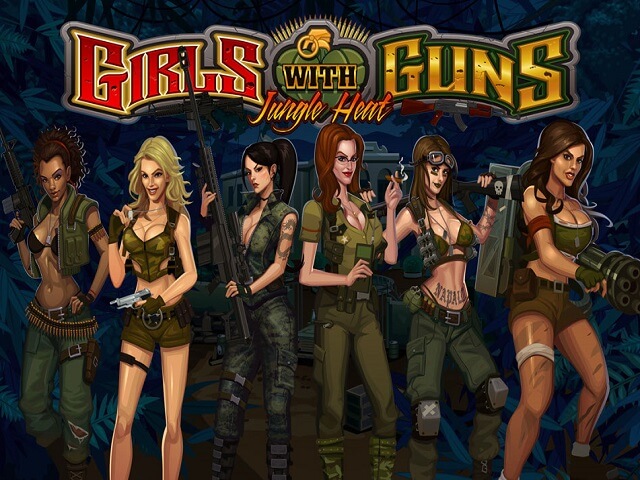 Girls With Guns is an honestly-named video slot that yes, pairs sexy girls with decidedly less (maybe not, depending on your taste, I suppose) guns for a game that will be enjoyed by guys (and girls, in some cases) in Canada and the world over.

As with the other popular entrants in Microgaming’s other 243 ways to win series, this game does not include actual paylines in this game, at least in the traditional sense of the term. This is a five-reel game that does include a wild and scatter symbol to spice things up a bit.

As the game is set in the jungle, the screen is framed with foliage that emphasizes the dense, dangerous location. The symbols include the various sexy girls, and of course, their guns, along with the villain of the story and more. Even the classic 10,J,Q,K, and A symbols are livened up with a gun-metal finish and accessories such as C4, claymores, and tear gas canisters to emphasize the combat theme.

Girls With Guns is a rare slot in that it features only three coin values- 1 cent, 2 cents, and 5 cents. However, despite this lack of coin values to choose from, you have a wide range of betting amounts to play at, all the way up to $30 CAD per spin.

We already discussed that the scatter symbol, which features a grenade in the background and the word “scatter” written diagonally on the symbol, is worth 30,000 coins if you get five of them anywhere on the reels. However, it is also the key to free spins, as getting three or more will earn you 15 free spins.

There is no true bonus game in Girls With Guns, but the free spins mode almost qualifies. You get 15 free spins when they are triggered, and you can retrigger them as you play. Furthermore, on each spin, a whole reel will turn wild, which gives you even better chances of winning.

If you like girls, guns, or just video slots, you should head over to a Microgaming casino and give this game a try as soon as you get a chance. If you like all three things, what are you waiting for? This slot is your dream come true!