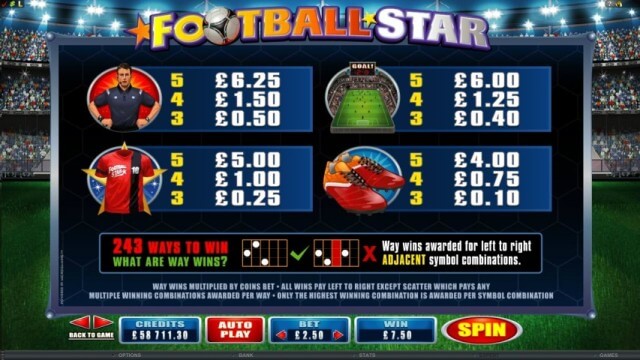 Football Star is a slot game powered by Microgaming. In this game, the symbols are on five reels and 3 rows and the player has 243 ways to win. As it can be understood starting with the title of this game, it features a football game, so that the symbols on the reels feature different icons representative for the theme: soccer ball, players, T-shirt, shoes, referee and football arena.

In order to play, the player first needs to select the coin value and the number of coins to bet. The total bet is automatically calculated. After setting the desired stake, the player needs to click on the Spin button to start spinning the reels. The wins in the game depend on the value of the stake, so that the higher the stake is, the higher the wins are.

The Football Star Logo acts as the wild symbol in this game. This symbol may appear as stacked wild symbol on reels 3, 4 and 5. There are more than 40 wild symbols on the reels, thus increasing the player’s chances to get a winning combination. The wild symbol can be used as a substitute for all the symbols in the game, except for the scatter symbol.

The Rolling Reels feature can award multiple consecutive wins to the player and this feature may also award a multiplier of up to 10x during the free spins feature.