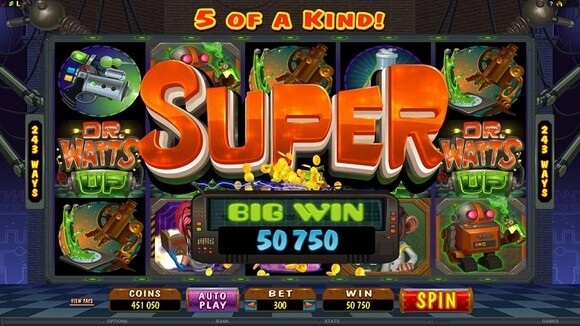 Dr. Watts Up is a funny slot game which is played online. This 5-reel and 243 paylines game has a quacky theme of a mad scientist. While the player derives great fun while playing this game, he is also offered the chance of winning maximum limit jackpot and bonus.

Dr. Watts Up is an animated video slot by Microgaming. The game was released in 2013, and it comes with a mad scientist theme. When it comes to the visual features, the game displays a high level of quality with detailed, high-resolution textures, and a bundle of themed symbols. The game also features a theme song, and provides quality sound effects during the gameplay.

The denomination in the game ranges from 0.30 credits up to as high as 120.00. The game comes with a non-progressive jackpot. Non-progressive refers to a maximum payout limit, which in the case of Dr. Watts Up is 50.000 coins, which translates to a $10.000 cash payout. The maximum regular win awards the player with 4860 coins.

The game’s jackpot can be won during the regular game. There are three requirements that need to be fulfilled in order to win it though. First, the player must play a real money game. The jackpot cannot be won during the game’s fun mode. Second, the player must make a maximum bet, with all paying lines enabled. Third, 5 Dr. Watts Up symbol needs to appear, in successive order, on an enabled payline. If all three of conditions comes to fruition, the player is awarded with the full value of the jackpot.

The wild symbol is represented by the Dr. Watts Up logo. As a wild, this symbol acts as a substitute, and it replaces any other symbols in the game, with the exception of the scatter.

The scatter symbols are represented by the Atom, and Lab Mouse symbols, and as scatters, they can appear on any reels, without the need to be in a sequence, or on an enabled line.

When three or more Atom symbol appears on the reels, the game triggers its free spins bonus. Depending on the number of appearing scatters, the player is awarded with either 10, 15, or 20 free spins, during which the controls are disabled.

Dr. Watts is a 5 reel, 243 pay way slot, and it comes with the usual game play features, it has a non-progressive jackpot, a wild symbol, a scatter, and a free spin bonus round.