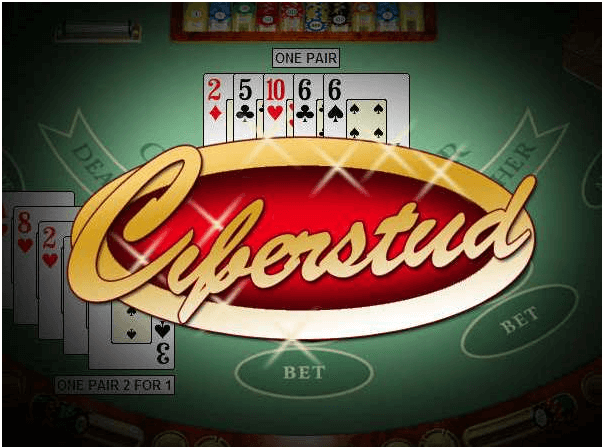 CyberStud poker is a simple and attractive version of this popular card game. Its various variations used to be available in almost all online casino for players to enjoy. Cyberstud Poker from Microgaming, is a game based on the famous stud.  A standard 52-card deck without jokers is used to play this game. The player’s opponent is a casino. The poker table is used for playing. It has five boxes, but you can play betting only on one of them. The goal of the game is to collect a poker hand higher in rank than the dealer or defeat him with any cards if there is no combination.

Cyberstud poker is the same stud poker in which players receive five cards and decide whether it is necessary to compare their cards with the dealer’s cards or not. The main difference from stud poker is that as soon the croupier deals himself only one card and places it face up. The other four cards he receives as soon as the player will make a decision concerning his hand.

You need to select the chip value and makes the ante. The croupier deals five cards to the player and one to himself. The player evaluates the rank of his cards and has two options: to continue the game by making the bet (call) in the amount of two antes or fold and lose his ante.
After that, the dealer draws the other four cards in any case. If the player has not folded, their combinations are compared. If the user wins, he gets his payout according to the rules. If he does not win, he loses both bets.

Cyberstud Poker is a quite simple game that’s why its interface is not complicated. It is possible to adjust the coin value using Plus and Minus under the image of the chip. Users control the gameplay using the following buttons: Place Ante, Remove Ante, Fold and Call, Deal.

Symbols on the video poker game are obviously the cards.If the player believes that he can beat the dealer with his cards, he should make an additional bet, which is two times highest that the ante. After that, the dealer draws four cards and compares the combinations.  If the dealer has a combination (i.e. an ace-king and higher), but the player wins, the payout is made in the following way:

As said above Cyberstud Poker is played with a standard 52-card deck with no jokers in it. The player is to adjust the Ante, which is a blind bet and is played before you get your cards. The maximum Ante is 50. Therefore, you should click the ‘Deal’ button to get five random cards, whilst the dealer gets only one up-faced card. Then you should look at your hand and see if you got a winning combination and decide what movement you should make next. You can Fold or Call. The Call option is to double up your Ante. The Fold option is simply to do nothing.

Whatever option you choose, the dealer will get his 4 cards to complete his hand. If your hand is stronger, you win. The dealer’s hand will qualify only when he has the Ace-King or a better combo. You will so the payout of each hand when you get them. The Fold option is mainly not to take risk of losing the double bet.

The game has no wild cards, neither no special features which make it easily accessible for even a complete beginner. The only thing you need to learn is the list of the winning hands. You have an objective to beat the dealer whenever you have a combo and that’s all. This particular video poker also has a very simple design, rapid animations and nothing excessive.

A basic strategy for Cyberstud Poker is:

There is no jackpot in this game of poker but if you choose to play the upgraded version of the video poker it has a progressive jackpot. A Royal Flush will win you the whole progressive jackpot, while any hand of a flush or better will win you a part of it. For your simple one-credit jackpot bet, these are the jackpots you can win: Royal Flush: The Entire Progressive Jackpot, Straight Flush: 20,000 credits, Four of a Kind: 500 credits, Full House: 100 credits and for Flush: 50 credits.